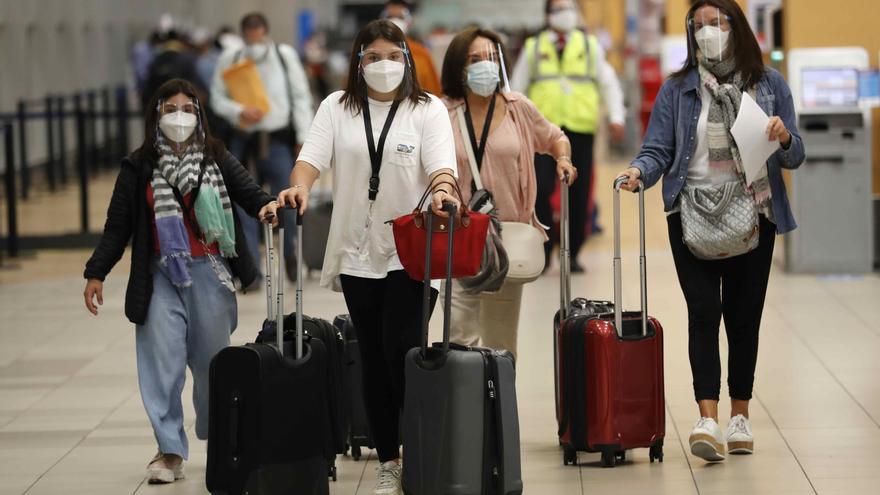 Lima, May 10 (EFE) .- Light of luggage, Sebastián Morón and his father, Mauricio, rush through the controls of the Lima airport to fly to the United States, the promised land of vaccines against covid-19 for thousands of Peruvians who do not want to wait for their turn in Peru.

“I am 23 years old and I am going to be one of the last here. With the political instability we do not know if it will touch us this year …”, Sebastian tells Efe, shortly before taking off to Houston (Texas), where he and his father already have an appointment to be vaccinated.

Milga Ramírez, a 60-year-old woman with residence in the United States, is traveling on that same flight. She “takes advantage” of the fact that she has to travel to get vaccinated “right away”, because in Peru she does not know when it will be her turn, which would correspond to her. next month.

The United States is the great destination for thousands of impatient and necessarily wealthy Peruvians who prefer to pay for the trip and advance their vaccination, since the process in Peru is just picking up speed and barely has about 2 million vaccinated, 5.4% of its population.

The increase in Peruvians heading to the United States has been abrupt, from 4,229 in February to 10,222 in March, with an increase of 137%, according to data from the National Superintendency of Migration.

In April, the jump was greater, with an average of 1,000 travelers a day, so it is estimated that in total there were about 30,000, although the president of the Peruvian Association of Travel and Tourism Agencies (Apavit), Ricardo Acosta, speaks up to 40,000, almost ten times more than in February.

This disproportionate increase “brutally” shot the price of tickets, because “the flights are ‘full’ and (the airlines) want to recover a little what they have lost,” Acosta told Efe.

If during the pandemic some tickets to Miami cost between 500 and 700 dollars, now they are more than 1,000 and some even exceed 4,000 in economy class.

According to Acosta, there are three types of vaccine tourists, the most popular being the one who makes an express trip to inoculate the only dose that Johnson & Johnson’s vaccine requires.

To a lesser extent there are those who opt for two-dose vaccines, which forces them to make two trips in a matter of a few weeks or to stay about 30 days.

Although in all scenarios the investment is evident, Acosta said that “it is worth making the effort” because, in case of infection in Peru, the treatment can be very expensive.

STEALTHY VACCINATIONS The “gringo” vaccines are an open secret in Peru, to the point that “Misias pero viajeras”, a couple of “youtubers” from low cost trips, made a video titled “Vaccines are here to spare” explaining step by step how to carry out the process successfully and at the lowest possible cost.

However, there are few who confess their trip, such as Alberto (fictitious name), who admitted to Efe that he prefers discretion because the “issue has become very politicized due to the situation in Peru”, after the “Vacunagate “, a scandal of secret and irregular vaccinations of high officials.

Still, from the home of a relative of his in Homestead, 30 kilometers from Miami, where he hopes to receive the second dose of Pfizer, this 27-year-old Peruvian opined that it should not cause embarrassment but “pride” because one has “the opportunity and the privileges for which the family worked. ”

Among the Peruvians thus vaccinated there are well-known faces such as Hernando De Soto and César Acuña, former presidential candidates who advocated that the vaccine in Peru be in charge of the private sector but who traveled to the United States for a vaccine financed with public money.

There are not few Peruvians who, after being vaccinated there, have relaxed the prevention measures and have become infected, since the vaccine prevents hospitalizations and deaths, but not the covid infection, which they have transmitted to their relatives with fatal consequences, says Acosta.

A major problem in a country where the vast majority of the population has yet to be immunized.