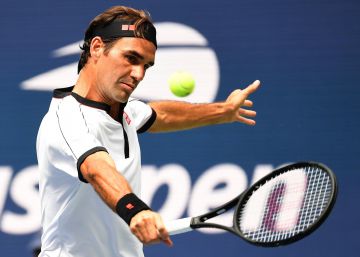 A sexagenarian New Yorker feels the luckiest man in the world because he just hunted the ball like he was a catcher of the New York Yankees. And it is not just any ball. No. You have left the racket farewell Roger Federer, so that picaresque is well worth it: it is recreated standing while the central public applauds the maneuver and raises it as if it had won the World Cup, and when tennis continues and the man loses himself again in anonymity he draws a smile on his face and puts it with dissimulation (relative dissimulation) in his left pocket. It has a treasure.

Meanwhile, the Swiss is squeezing the good of David Goffin and winning the games, increasingly clearer and faster, and ends up closing the morning with an express victory, the fastest tournament in the men's draw: 6- 2, 6-2 and 6-0, in 1h 19m. "It's a great day," he says during parliament at the foot of the track, raising his head in the direction of the sky and opening both palms to welcome the sun. It suits Federer the morning. As in the previous round, also in the morning, he is recovering his inspiration and clearing the clouds that accompanied him in the first two games in New York.

The notes of the Take me out Franz Ferdinand and the American public have fun. The genius says goodbye to setbacks and right-handed as if throwing roses, although Goffin obviously does not make the party a bit of grace. The Belgian begins without shyness, but then disappears from the map because the morning is most pleasant for the Swiss, who landed in Flushing Meadows with morale on the ground and in full soliloquy, still spinning the final that lost a month ago in Wimbledon against Novak Djokovic. A train that passed, and who knows if it will return.

"Sometimes I have flashbacks of that day ”, explained in the anteroom of the tournament the champion of 20 greats, of 38 years. "I thought things like: Oh, I could have done that, I should have done the other … But the next day you are having a glass of wine with your wife and think: the semifinals (in London, against Rafael Nadal) were pretty good, and even the final ”, the one in Basel was comforted, who added to the mood downturn he added two very blurred first interventions (Sumit Nagal and Damir Dzumhur) that far from clearing up the doubts fed them. Federer started badly, confused by New York night, but it has been scheduled in the morning and the situation has taken a turn. Everything looks better. It is no longer so far-fetched to think that he can continue to progress and, why not, fight for a trophy that has resisted him for more than a decade; Then, 2008, I had already managed to chain a poker.

"I do not press too much," he says. “Maybe not as favorite as it was in 2006 or 2007, but I am very aware of how I have to approach this tournament mentally. It will be difficult to win, no doubt, but I feel I can do it, ”he says optimistically while the painting matches him in an aesthetic crossing with Grigor Dimitrov (7-5, 6-3 and 6-4 to Alex de Miñaur). With a couple of early birds, everything looks different. He still maintains that of Basel that the track of this edition is excessively slow, but it is catching the tone and Goffin fried it with 35 winning strokes and only 17 failures, finishing nine of the 10 options of break That was sought.

ATP that he is the most productive tennis player in the first ball of the matches with a 72.9% effectiveness, ahead of John Isner (72.6%) and Djokovic (70.1%). His opponent yesterday did not smell the right cross that he drew at the first point and from there to the quarters, confirming the regularity of this season: he reached the second week of all majors in the same course since 2015. “I have had very good feelings, like the day before. I am very happy with the level I am acquiring, ”he said with the ticket in his pocket, waiting for what could happen on Monday at Nadal-Cilic (1.00, Eurosport).

He, meanwhile, is flying as he keeps running away from what happened at Wimbledon, one of the most painful defeats of his career. Federer takes off in the sun.