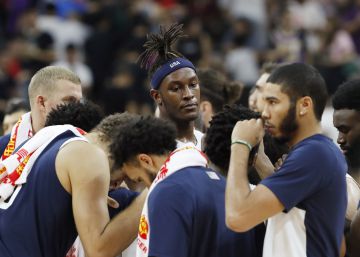 Serbia's team confirmed Friday that the team with which the United States has competed in the World Cup in China is not in a position to continue occupying the scepter of basketball. After the blow that led to his elimination in the quarterfinals when losing to France (79-89), he consumed a new disappointment and also ended up falling against Serbia (94-89) in the qualifying match for the fifth to eighth positions. The mockery was monumental in the first quarter, in which Serbia swept the US team 32-7.

Match for positions 5 to 8 of the Basketball World Cup played at the Dongguan Basketball Center. With capacity for 15,000 spectators.

To date, sixth place in the Indianapolis World Cup in 2002 was the worst result reaped by the US team. After fitting his second defeat in this World Cup in China, the team led by Gregg Popovich will fight against Poland for seventh place as the best possible result. In any case, it will be the worst classification in the United States in a major international competition. His worst record so far in the 45 major tournaments in which he participated – Games, World Cups and the Americas Cup – was the sixth place in the 2002 World Cup.

In a match in which it was demonstrated why both teams – starting the big favorites – have gotten out of the competition, the Serbs, despite their serious gaps in defense, were superior at all times to the Americans, very unequal in their game . The first quarter was a memorable review of the Balkans who, commanded by a Bogdanovic in a state of grace, established a partial 32-7, no less than 25 points ahead in ten minutes. His triples – along with those of Micic, Jovic or Bjelica – fell like ripe apples in the basket of the American team, who was stunned to what the score was scoring.

All the baskets that did not enter Serbia against Spain from the line of three, they did today in these first minutes, while the Popovich pupils saw their balls stamped one after the other against the hoop, when they did not fall directly outside.

That the still valid world champion got only 7 points in ten minutes gave an idea of ​​his poor image and foreshadowed a humiliation of colossal proportions. However, in the second half the Serbs squandered the great advantage they had obtained with unforgivable defense oversights, which this time did take advantage of the now inspired Kemba Walker and Barnes
to almost flip the scoreboard. Walker became the engine of the American comeback, recovering rebounds in defense incessantly, distributing assists and making
fly triple accurate to the Serbian network. All this allowed them to go to rest only 4 points on the scoreboard (44-40).

Serbia returned, however, to take the reins after the break and moved away up to fifteen points, although a few minutes later he showed his defensive sinks, which took advantage of those of Popovich to get only three goals at the end of the third half. The irregularity on both sides remained the tonic of the game until the end and, despite being at close range, the United States never got ahead and rarely gave the impression of being able to win the game. A triple of Walker when it was less than a minute to go and that reduced the difference to four points triggered the nervousness among the Serbs, but it was too late and lacked talent to take advantage of the opportunity.