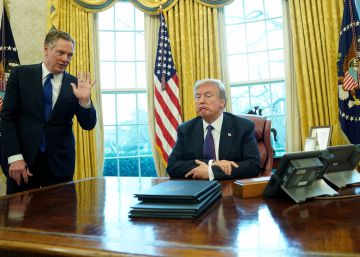 The United States and China still do not have a fixed calendar to close the first phase of trade negotiation. To the point that President Donald Trump says he would be prepared to wait another year until the election is over. Despite the lack of agreement, negotiators in both countries are considering delaying the extension of the tariffs that must enter into force on December 15.

Investors and entrepreneurs are hopeful that the US and China will be able to avoid an escalation in the trade conflict that further hurts the global economy. It is one of the factors that led the Federal Reserve to lower interest rates three consecutive times this year. Last October, a principle of agreement was announced to close the first phase of the negotiation.

The US and China were expected to have closed it a month later, coinciding with the celebration of the G7. That appointment was canceled due to protests in Chile, the country that was to host. The negotiators, however, are still trying to finalize how the pact will be shaped. Beijing pledged to acquire agricultural products and asked at the same time to start lowering tariffs.

Trump, meanwhile, maintained his intention to extend tariffs on Chinese products worth 165 billion dollars as of Sunday. The negotiators of both countries, however, are implied that they could be delayed to give more room for negotiation. This is what happened on previous occasions when an agreement was being reached even though tariffs continued to rise.

The secretary of Commerce, Wilbur Ross, recalled in any case that the president "likes tariffs" and that he will not give his approval until he is convinced that the agreement "works for everyone." If the negotiations progress, Donald Trump is willing to continue exerting pressure as he did last summer. The Republican is convinced that the Chinese who an agreement.

At this time there is no planned high-level event that indicates that the pact to close the first phase of the negotiation would be close. The negotiators of both parties, however, are in constant contact. Trump suggested even last week that he wouldn't mind waiting until after the presidential elections. If he wins, as Ross says, "he will have more ammo."

Washington uses as an argument to keep the swords high the strength of the economy, facing the problems that China accuses. The trade deficit also gives more room to resort to tariffs as a protectionist weapon while Beijing's response is more limited. The commercial conflict is also causing the supply chain to move to other countries.

The moment of negotiation, in Trump's mouth, is "critical." The extension of tariffs has, however, a high political risk for the president and Republican legislators. Until now, the impact of the commercial battle has been well absorbed by the companies and farmers have been mobilized to respond to Chinese retaliatory measures. But if it reaches the consumer, the equation changes.

The last tranche of tariffs affects imported products such as mobile phones and televisions, so the ramifications may be greater. Neither the US nor China show, in any case, hurry to reach an agreement. In addition, the first phase of the negotiation focuses on the less complex aspects that must be resolved in order for a structural change in the commercial relationship to occur.

The analysts in Wall Street trust in any case that some kind of agreement must be reached before the election cycle in the United States. The tariff battle, despite having a limited impact on the economy as a whole, would be eating a good part of the benefit derived from the fiscal reduction and raising uncertainty. Loss of consumer confidence would have major consequences.