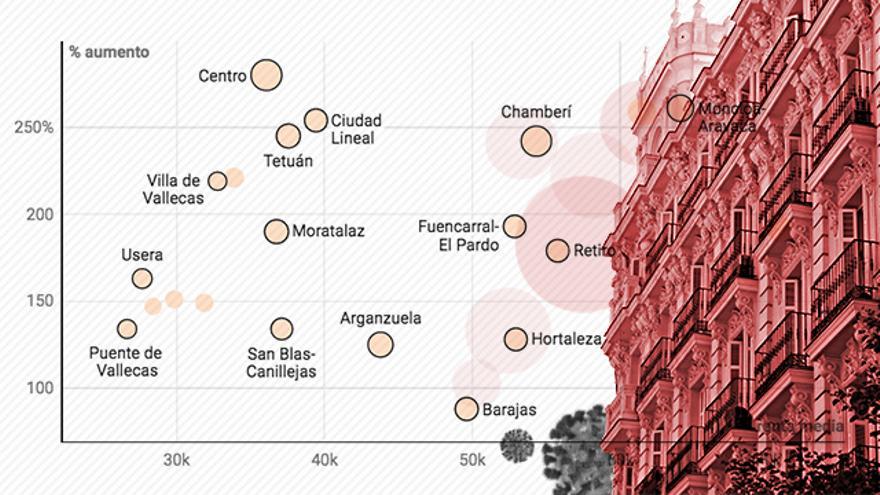 “The coronavirus does not understand races, countries or social classes,” it was said at the beginning of the pandemic, when a new disease had hit several parts of the world equally. A year and a half later, the data and epidemiological studies refute that thesis. Nations without access to medical advances or vaccines They face a major grievance vis-à-vis Europe and the United States, and even in the latter, income levels paint a very different picture within the same cities.

Barcelona and Madrid, the two largest capitals in Spain, are now experiencing the opposite phenomenon to other times of the pandemic. If in the first waves the cases accumulated in neighborhoods poor, influenced by the imperative of face-to-face work and the use of public transport, are now the neighborhoods rich or those with higher incomes that concentrate higher incidents related to other risky activities. These two autonomous capitals are the only ones that shed their infections through basic health areas, but experts assume that it is a trend that is repeated in many more cities in the country.

In the case of the Catalan, the districts of Horta-Guinardó, Sants-Montjüic and Ciutat Vella have increased by almost 300% the cases reported in the first two weeks of July. Regarding neighborhoods, Ciutat Vella, Eixample and Sarrià-Sant Gervasi reach incidences within 14 days of up to 2,083 cases per 100,000 inhabitants.

“In Barcelona we started from a worse base than the others,” explains Quique Bassat, an epidemiologist at ISGlobal and a city resident. “Sant Joan is celebrated here like nowhere else and there are still large bottles and events every night,” he explains. Most of the contagions in Catalonia, which is the most triggered region in the country, correspond to young people between 20 and 29 years old. The latest incidence data in this group offered by Health is 3,375 cases. It is followed closely by those between 12 and 19 years of age, with 2,487 cases per 100,000 inhabitants. “It is outrageous,” acknowledges Bassat.

Catalonia has wanted to stop it by imposing the absolute closure of nightlife, advancing the hours of the hotel business and requesting the High Court of Justice for a curfew at 1:00 in the morning that, since last Saturday, affects 161 municipalities. “Vaccination has caused the impact to skyrocket among those who have access to leisure,” explains Pedro Gullón, member of the Spanish Society of Epidemiology (SEE) and author of the scientific article COVID does understand social classes. It does not refer to young people in general, but to those who can afford “to go on an end-of-year trip to Mallorca or Salou, pay 20-euro tickets at a nightclub or go to festivals with a price that is not very affordable for everyone” .

The manager of the Barcelona Public Health Agency (ASPB) related the outbreaks in the more affluent neighborhoods, such as Sarrià or Les Corts, with the end-of-year trips. There are more than fifteen affected schools in the city and most are private and subsidized centers in the upper part of the city. “Bottles are still a risk factor, but these specific cases depend on travel, mobility, paid nightlife – which occurs indoors more than outdoors – and who can afford it,” Bassat admits.

Although the epidemiological situation in Madrid is better than that of Catalonia, the trend “barrio rich in front of neighborhood poor“It is repeated. The districts Centro, Chamberí and Salamanca far exceed those of Villa and Puente de Vallecas, Villaverde or Carabanchel. While the former are around 450 incidents, the latter score three times below, with 150 cases per 100,000 inhabitants Again, the age cohorts most affected are those between 12 and 19 years old, and those between 20 and 29. “The fifth wave has shifted towards young people and has much more to do with leisure and closed places than the above “, says Manuel Franco, professor of Public Health at the University of Alcalá and Johns Hopkins, and resident in Chamberí.

“They are kids from private and subsidized schools, who usually come from more affluent families, and who are involved in outbreaks like the one in Mallorca or those related to paid leisure”, the expert perceives. He also defends that this population was more protected in previous phases of the pandemic, when the impact was concentrated in the humble areas of Madrid. “In a first stage, when we were all very sensitized, the greatest exposure was given by essential jobs and mobility from areas far from the city center. On the other hand, the most privileged people were able to telework or attend classes on-line, and now they are virgins“interprets Franco.

Although Madrid is at high risk due to transmission, with a total incidence of 340, it refuses to request the curfew that has entered into force in the Valencian Community or Catalonia itself. It is also one of the few regions that keeps the nightlife open until 3:00 and closes the hotel business at 1:00. “Although the nightclubs have put security measures, control of capacity, masks or separation between tables, it is a complicated space that has conditions predisposed to transmission,” acknowledges Gullón. In the case of Madrid, most of these stores are in the affluent areas with the highest incidence.

The problem with gathering groups that are still unvaccinated in discotheques is that it generates an effect of “lack of immunity”. It is not something that happens specifically in Madrid and not only has to do with nightlife, but with the holidays themselves. “The pattern is similar and repeated in all cities: the outbreaks in Cantabria were closely related to upper-class people who vacation from Euskadi, or those from Navarra with whom they have been able to go on a year-end trip to other regions” recalls the epidemiologist.

Experts agree that at the beginning of the pandemic, transmission depended on social class, work, housing, and sanitary conditions. Now it has moved down the age pyramid and leisure and purchasing power are the factors with the greatest exposure. “Holiday mobility is high class, there are many people who do not have a holiday or have it for one week a year,” says Franco.

Almost a year ago, at the beginning of the second wave, Spain experienced the opposite case. In Madrid, Aragon or the Balearic Islands, infections began to multiply at the end of August in the working-class neighborhoods. At that time, the perimeter confinements only affected some areas of these cities and residents demanded compensation for the lack of resources. In the specific case of Madrid, they demonstrated against a “discriminatory” and “unworthy” measure towards the southern neighborhoods, the most overcrowded and impoverished in the region. Now, Usera, Vallecas, Carabanchel or Villaverde are the best.

“Last summer we had both the outbreaks of seasonal workers and companies that were returning to face-to-face work. They were closely related to work and family life. Nightlife even affected workers more than people who came. In addition It was open for a short time and had many restrictions “, compares Pedro Gullón. Regarding the leisure that is also enjoyed in the most humble neighborhoods, experts prefer not to theorize, but they understand that it may be more likely to take place in open spaces.

Will the trend change again in September with the return to work? Will the poor districts be the worst hit again? “At the end of the summer we will have a more advanced vaccination and the general transmission will be lower. Outside of leisure, the incidents will be balanced and will be more related to the workplace”, confides Gullón. Bassat is concerned about going back to school, the design of which depended on two factors: a low incidence among young people and a high vaccination rate in adolescents. “Nothing like that happens. You can go back to school, but I think with the same measures as this year instead of half gas,” he believes.

Regarding this, Manuel Franco makes two positive readings: “We have stopped the virus among the vulnerable and that has caused infections and incidence to move towards young people; and the educational community has done very well keeping that population a virgin. for an entire school year. ” However, he asks “not to bother her in summer” and that an exhaustive control of the night, the closed places and the bottles is carried out. That is, “that we take care of them by vaccinating them, but also studying them and tracing their outbreaks.”

“What we have learned from COVID-19 is that it follows the same social patterns as other diseases,” argues Pedro Gullón. “It depends on the social class whether or not you are exposed to diabetes, viral or respiratory diseases. It would have to make us understand that supports should be placed where they are most needed,” he concludes.