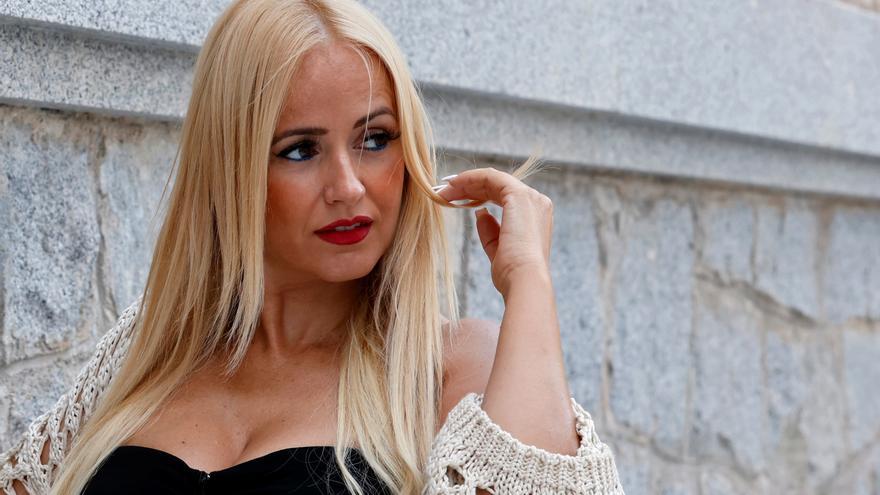 Madrid, Jul 1 (EFE) .- De La Húngara, like Camela, everything was said at the time for their successful fusion of flamenco pop. “That if she was the only thing that was heard in the bumper cars, that she was tacky or that she didn’t sing,” she recalls after being recently elevated to the altars of modernity for her musical bombshell with C. Tangana.

“Until that, I played in another league. Thanks to that song and to him I have reached audiences that did not know me and countries that did not know about me. I have played even in Los 40 Principales, in places where my music did not fit,” he acknowledges the Sevillian artist in a talk with Efe when talking about the repercussion on her career of “You stopped loving me.”

He still remembers the day the message from the Madrilenian arrived through Instagram. “I knew who he was because I loved him, but I had to call my nephew, who scolds me because I believe everything. I told him: ‘But if that blue symbol has that symbol, it must be him!” he reminisces about his unbelief.

When he realized it, he was in the studio in Madrid in front of the author of “Mala mujer” to record his part. “I was expecting him in a limousine, but he’s very humble. He told me that he was nervous, that my voice didn’t even come out,” says the artist amused, who in the end contributed some flamenco jaleos that have become one of the most iconic details of the song: “Tomaquetoma!”.

Sonia Prieto (Écija, 1980) has thus become the only female artist on the album “El madrileño”, one of the greatest hits of the year, especially for that “You stopped loving me” which broke records with 1.6 million of streams on your first day on Spotify.

“I just had to ask her: ‘There are so many cute girls who sing flamenco … How did you think of me?’ And she replied: ‘Because this song was made for you; no other than La Húngara could do it, because I want him to remember that time and that voice is only yours, “he remembers.

For her, who thinks that music is like perfumes in terms of its ability to transport you to other moments, that has been one of the reasons for its musical longevity despite criticism: “I have never changed my style, because it is what my audience likes it and what I feel comfortable with. You may like it more or less, but there I am. ”

She has managed to transfer to her songs the strength she has shown in a life worth three: at 41 she is a grandmother, mother of three daughters, the first of whom was born when she was only 15, while the last, Of Senegalese origin, she sponsored him in 2013, leading a parallel career without sponsorships in which he published 16 studio albums in 18 years.

“I have always been very mine, very woman, very thrown forward, independent and fighter. I did not like to depend on anyone and when I had my Laura I did not want anyone to give me anything, I worked it out,” claims who Being a minor he even set up a dance academy to earn money.

This is what she knew how to do since she was a child, when the other babies “played dolls” and she would stand in front of the immense mirror in her mother’s room, “barefoot, to rehearse everything she had learned for Pantoja”, a rarity in a family in which only one aunt had shown musical concerns.

“But where did you get this girl from, if you don’t sing or dance?” Asked a neighbor. “A Hungarian left it under a bridge and I picked it up,” her mother replied sarcastically. The joke, years later, served to give him an artistic name “with force” when he recorded his first demo.

It was after being discovered in a karaoke by her still today producer, Francisco Carmona, singing by Rocío Jurado and at a bachelorette party that she did not want to go to. At the last minute the minibus was parked at the door of his house and he got on. “My grandmother used to say: ‘What is for you not even if you put on it and even if you don’t, not even if you take off'”, she considers about destiny.

First came “A Camarón” (2001), his debut, and in 2019 “I will wait for you”, the last album until this year he publishes the next one, for which he is already selecting songs and from which “Locamente” has advanced, faithful to your style.

“I don’t call what I do flamenco, because flamencos don’t like it and I respect them, so I say that I do commercial flamenco pop music”, she points out, before saying that she does consider herself flamenco and that she finishes her shows ” por bulerías giving a little kick “.

After the stoppage due to the covid-19, she is recognized as “nervous” as at first before her return to the stage this July 3 in a concert in Flamenco Sur, in the bullring of Valdetorres de Jarama (Madrid), together with Camela and Rebujitos.