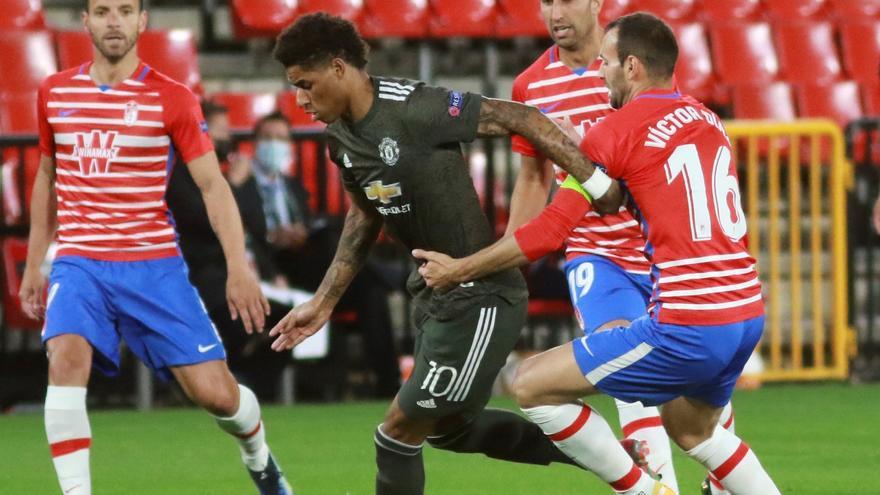 The Manchester United did not lead to surprise and won this Thursday 0-2 against Granada at the Nuevo Los Cármenes Stadium in the first leg of the quarterfinals of the Europa League, so it leaves on track a tie that will be resolved within a week in English lands.

A goal after half an hour of the English game Marcus rashford and another from portuguese Bruno fernandes, from a penalty, in the 90th minute he gave victory to a Manchester United that created few chances to score but that imposed its superiority against a very worthy Granada who was not as fine as his rival face to goal.

The first section of the match was even and developed at a fairly low pace, without any team being able to reach the opposing area in danger, although Manchester United took over the duel as the minutes passed from the possession of the ball.

In fact, the highlight of those opening bars was that the match was stopped for almost a minute when a spontaneous totally naked jumped onto the grass and had to be taken off the pitch by the National Police.

David de Gea, bet for the English goal of the Norwegian coach Ole Gunnar Solskjaer, intervened for the first time after a strategy action by Granada, while the first arrival of the visitors was a direct free kick sent out by Marcus Rashford.

Rashford himself warned before the 0-1 with a placed kick that went wide, an option to which the Brazilian Robert Kenedy replied with a shot outside in a forced position to finish off.

Rashford, the best of the English despite being touched to the game, put his team ahead in the 31st minute after winning the back of the local defense and beating the Portuguese Rui Silva in hand-to-hand after a sensational pass along the Swedish Victor Lindelof.

The Spanish team reacted well in the final stretch of the first half and touched the tie with three good chances: a shot by Venezuelan Yangel Herrera that was repelled between the post and David De Gea, a shot off Roberto Soldado and a distant volley from an active Kenedy who ran into David de Gea again.

Granada prolonged their good moment at the start of the second half, with another long shot from Kenedy that made David de Gea work again.

The injury of Portuguese Domingos Duarte slowed the momentum of the premises and Manchester United regained dominance, with a good finish from behind Harry Maguire closed with a bad kick from outside the center area.

The final half hour passed with few shocks, since the visitors risked just enough to keep their income and the locals tried to find the tie but with the clear premise of not receiving as much that would leave the tie sentenced, something that finally happened.

Yangel Herrera, the best of Granada in the game, sought the goal in his umpteenth arrival in the area, after David de Gea crossed again on the way to Kenedy’s goal.

Rui Silva avoided the 0-2 in the 82nd minute with a saving stop before his compatriot Bruno Fernandes in a clear heads-up, although there could be offside in the action.

When it seemed that the match was going to end 0-1, the Portuguese referee Artur Dias signaled a rigorous penalty for the English after a clash in the area between the Cameroonian Yan Eteki and Bruno Fernandes.

The Portuguese attacker, who went unnoticed during the game, put the tie very expensive for his team with the 0-2, which came in the 90th minute, by transforming a penalty with a little luck since he was about to catch the ball Rui Silva.

Incidents: First leg of the quarterfinals of the Europa League played at the Nuevo Los Cármenes Stadium behind closed doors.