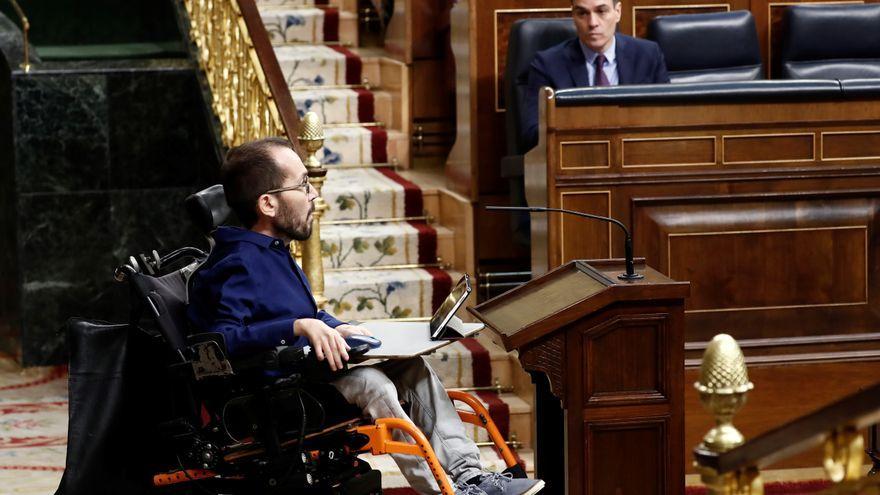 The cohabitation in the Government of PSOE and United We Can has been complex since the beginning of the legislature, although both parties make a positive assessment of the first experience of a bipartisan at the state level since the restoration of democracy. In their 25 months of life, the partners have had their ups and downs, but in recent times the clashes have gone more unnoticed than on other occasions. However, the fear that the big fish will end up devouring the boy has led United We Can to mark distances and a profile of its own with respect to the socialists.

The feeling that they have in Moncloa is that the successes of the Government end up being attributed to Pedro Sánchez -also the errors- and, in case there are doubts, they have intensified the campaigns from the party on laws that, a priori, could be scored as many the minority partner, such as the labor reform or the increase in the Minimum Interprofessional Salary. In the two years of this mandate, the PSOE also tried to raise its head in terms of equality, which has traditionally been one of its flags and has now yielded to Irene Montero. The Socialists promoted a law of equal treatment outside the Ministry, which is still in the pipeline, and have also promised to promote a rule to abolish prostitution, although there are discrepancies on the spectrum of the left on how to approach the matter.

But the socialist wing has been dodging some of the internal struggles for some time under the pretext of giving some oxygen to United We Can, which they see on the decline with some concern. In the PSOE they assume that their permanence in power depends to a large extent on the formation to their left having a good result. The minority partner, for its part, has increased its demands outside the programmatic agreement, but without much success.

One of the examples in which the PSOE avoided the clash was this week, when United We Can took credit for the expansion of the so-called 'social shield' with the extension of measures such as the prohibition to cut supplies to vulnerable families or the suspension of evictions. "United We Can has been negotiating with the PSOE for weeks to approve the extension of both measures, although it has not managed to get the government partner to agree to also include the extension of rental contracts in the package," they lamented from the minority sector of the coalition. The Socialists avoided entering the clash. Until recently, the strategy of United We Can was precisely to filter discrepancies as a method of pressure during the negotiations, but once the great entrenchments in laws such as trans or housing were overcome, this type of clash has been substantially reduced.

What United We Can do, however, is to mark its own profile in Congress through parliamentary initiatives that go beyond the programmatic agreement signed by Pedro Sánchez and Pablo Iglesias in December 2019. Faced with the ideological dispute that in the In the years 2015 and 2016 Pedro Sánchez fought with his current partners for occupying the most progressive space, the PSOE is now aware that it has hegemony in that space and has rejected them without problems. "No one gives me leftist cards, least of all you"the president blurted out ten days ago to the ERC spokesman, Gabriel Rufián, who is one of the usual partners of the Government that demands more ambition in progressive policies to combat the rise of Vox.

“There is an intense debate in the progressive space about what to do to stop the extreme right. From my point of view, the solution does not lie in trying to establish cordon sanitaires, which are impossible, simply because they forget that the Spanish right, unlike the German, is not anti-fascist. What can stop the monster trumpist full of hate that we saw this Sunday surrounding the headquarters of the PP is that we take courageous measures that improve people's lives, ”Echenique defended in the plenary session of Congress this Tuesday.

One of those initiatives in which United We Can distance itself from the PSOE was the tax reform proposal to raise taxes on large fortunes and electricity companies. The Minister of Finance, María Jesús Montero, who is one of those who has the best harmony with the minority partner, showed her anger by crossing out the measure as “inopportune”. The Government has commissioned a committee of experts to make a proposal that will be the one they take as a basis for changes in taxation. In the parliamentary debate, the socialists accused United We Can of "political opportunism".

The decision to take this non-law proposal to the plenary session came after the PSOE and United We Can distance themselves from the debate on the macro-farms and the position on Ukraine in the middle of the electoral campaign. “They are wrong to go against the PSOE”, they lamented in the socialist ranks.

The strategy has been repeated this week when the group led by Pablo Echenique proposed a law proposal to create a public company (Spanish Energy Production) to generate energy, assuming the concessions of hydroelectric plants that expire with the aim of reducing skyrocketing prices. . The PSOE rejected taking the initiative into consideration by defending that measures are already being implemented to lower the price of energy and reproached its partner for setting "high objectives" in the statement of reasons, such as the green horizon, the reduction of the bill or the promise that no one will suffer from energy poverty when, in his opinion, that standard would not be met. “In these nine articles, the only thing they say is that a public energy company will be created. Full stop”, summed up the socialist deputy Germán Renau.

“On many occasions, not many, but on some, yes, we are two different formations, we have many nuances, and sometimes we vote differently, but believe me, the important thing is what the Government of Spain does, which is what we are presenting here”, said the second vice president, Yolanda Díaz, at the press conference after the Council of Ministers on Tuesday, questioned about this divergence in the parliamentary initiatives of the coalition partners. "Here there is unity of criteria, there are no divisions, there is a single path and we are working in the same direction," settled the Minister of Labor, who distinguished the partisan plan in Congress from the management of the Council of Ministers.

The same day that Díaz pronounced those words and that Congress overturned the initiative to create a public energy company with the vote against the Socialists, United We Can asked its partner for a week to analyze the proposal to investigate the abuses in the Church that former Vice President Carmen Calvo agreed with the PNV. Basque socialists and nationalists registered the new initiative -which hardly differs from Ferraz's initial one, since the work will be piloted through the Ombudsman- without the approval of the confederal group, which considers that this investigation is "complementary" to the that they want to promote in Congress, a scenario that the socialists want to avoid so that the matter does not lead to a "show".

That was precisely one of the issues addressed by the parliamentary spokesmen for PSOE and United We Can, Héctor Gómez and Pablo Echenique, respectively, in a meeting they held on Thursday to "strengthen the relations of both parliamentary groups." The intention was also to address the laws that they intend to push forward in Congress during this session and that in some cases have been blocked in Parliament for months, such as the repeal of the gag law or the law of 'only yes is yes'or the housing law, which was delayed due to discrepancies within the Government.