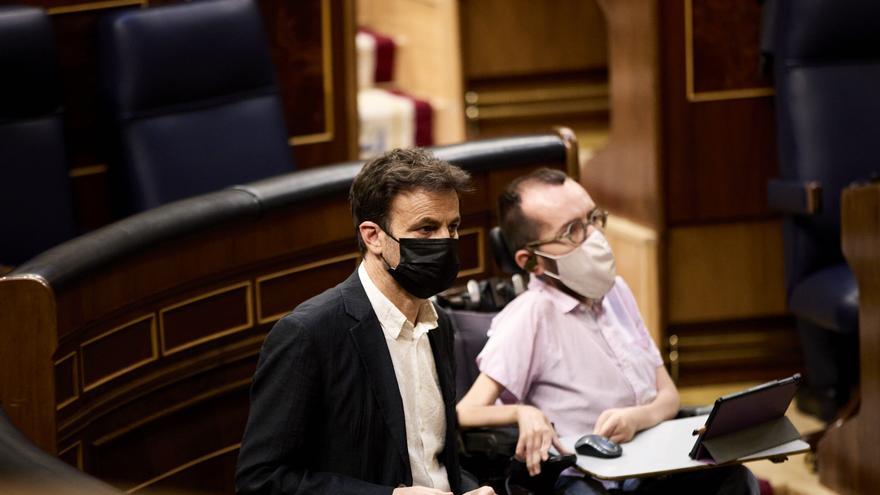 United We Can met this Thursday with the President of the Catalan Generalitat, Pere Aragonèsto address the "scandal" of spying on 65 pro-independence leaders through the Pegasus system revealed this week by the platform of Canadian researchers Citizenlab. Once the meeting is over, the confederal formation has assured that it will be "more concerned" about the case and, although it has asked its partner in the Government, the PSOE, for explanations, it has insisted that what happened "is the legacy of the PP" and has attributed the espionage to uncontrolled “police elements” and to the “sewers of the State” linked to the popular ones.

“This controversy, this scandal, has to do above all with the PP. This technology was purchased during the mandate of Minister Fernández Díaz, the sewer minister of the Rajoy government. We know how certain elements of the patriotic police, of the PP State apparatus, have operated during these years”, assured the president of the United We Can group, Jaume Asens, in statements to the press.

In his opinion, and given that according to the data revealed by Citizenlab the espionage continued with Pedro Sánchez in Moncloa, "the question is how long these active elements have continued." “Because we know that they were active before the investiture of Pedro Sánchez and the president of the Generalitat has explained to us that at that time his phone was also tapped. That is not accidental. It has to do, surely, with the will to interfere politically, to interfere on the part of these police elements in political life”, he emphasized.

“This points above all to the PP Government”, Asens insisted, although he has also demanded a “forceful action” from the current Executive of which the confederal group is a part. According to him, it is "those responsible for the competent ministries" in matters of security, alluding to the Interior and Defense, who "have to give explanations."

The confederal group does not see the legislature at risk

The spokesman for United We Can in Congress, Pablo Echenique, wanted to emphasize that his group has transferred its "concern" to its partner in the Government "through private channels and in the most forceful way possible." “We hope that they take seriously an issue that not only affects the independence parties but also the democratic quality of our country. If these types of practices are legal and are carried out for ideological reasons, it is evident that we do not live in a complete democracy”, he has settled.

However, United We Can not see the legislature at risk and neither does the ERC's parliamentary support for the Government. Aragonès has been insisted that "the will to dialogue with the Government of Spain must be above any action from the sewers of the State."