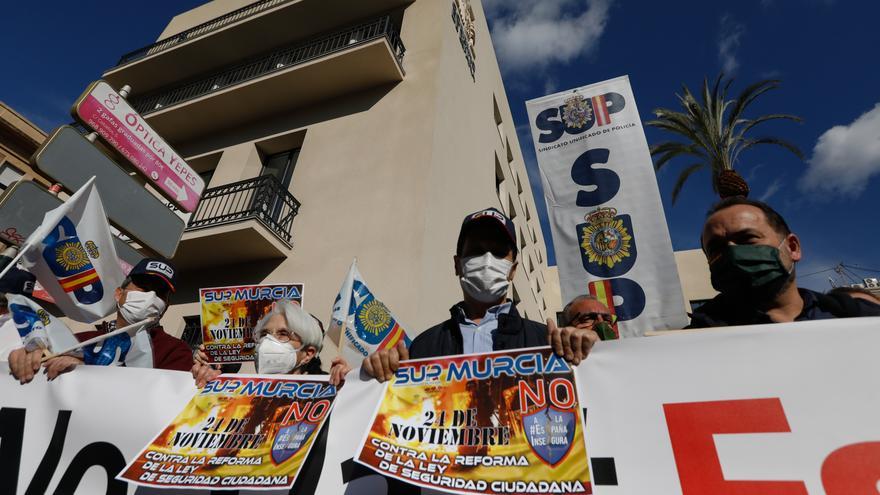 United We can this Monday presented a letter to the Venice Commission of the Council of Europe denouncing the demonstrations of "more than 40 associations" of the Police and the Civil Guard to reject the reforms proposed by the PSOE and the confederal group to the Law Citizen Security, known as the 'gag law'.

In the text, advanced by Cadena Ser, and to which elDiario.es has had access, it is recalled that "the changes and modifications to the Law on Protection of Citizen Security with which the professional police associations have been most critical and have shown their radical opposition coincide with the following reform indications expressly formulated to Spain, by the Venice Commission: the elimination of the penalty for the recording and dissemination of police actions when they do not affect the privacy or security of the agents, the reference to the presumption of veracity of the agents respecting the principle of presumption of innocence, or the realization of peaceful demonstrations without the need for prior communication in certain cases ".

"They also showed their opposition and protested the modifications made in order to formalize and reduce the harmfulness of the material used by the Security Forces and Bodies (such as certain types of anti-riot equipment, rubber bullets or electro-shock guns)" United We can highlight in its text.

However, the confederal group recalls that "Organic Law 2/1986, of March 13, on the Security Forces and Bodies, in its article 11 on their functions, establishes that 'their mission is to protect the free exercise of rights and freedoms and guarantee citizen security through the performance of the following functions: a) Ensure compliance with the Laws and general provisions, executing the orders they receive from the Authorities, within the scope of their respective competencies. b) Auxiliary and protect to people and ensure the conservation and custody of assets that are in danger for any reason. c) Monitor and protect public buildings and facilities that require it. d) Ensure the protection and safety of high-ranking personalities. e ) Maintain and restore, where appropriate, order and public safety. F) Prevent the commission of criminal acts. G) Investigate crimes to discover and arrest the alleged guilt ables, ensure the instruments, effects and evidence of the crime, making them available to the competent judge or court and prepare the appropriate technical and expert reports. h) Capture, receive and analyze all data that are of interest to order and public safety, and study, plan and implement crime prevention methods and techniques. i) Collaborate with civil protection services in cases of serious risk, catastrophe, or public calamity, under the terms established in civil protection legislation. '

United We can also insist that "international human rights standards bind all states and their agents, including law enforcement officials." "Law enforcement officials will therefore fulfill the duties imposed by the law, serving their community and protecting all people against illegal acts, in keeping with the high level of responsibility demanded by their profession. They will ensure protection. of public safety and people's rights In another area, the Security Forces and Bodies have the duty to defend the rights of all people, organizations and political parties and to protect them equally without fear or favor. From these obligations it follows that, behaviors such as those we have been seeing by some organizations and individuals belonging to the Security Forces and Bodies deviates from that obligation that emanates, not only from the Spanish Constitution but from the international Treaties from which Spain is part ".

This attitude, adds Unidas Podemo, "contrary to the recommendations made by the Venice Commission to Spain to proceed to reform the Citizen Security Law, has also been expressed by some Spanish political parties with parliamentary representation." "There have also been many demonstrations by spokespersons for the Popular Party, Vox and Citizens political forces against the modifications to the Citizen Security Law proposed by the Socialist and United We Can parliamentary groups in compliance with the recommendations of the Venice Commission , consciously and demagogically spreading the false argument that this reform seeks to end public security and deprive the security forces and bodies of the minimum elements and tools necessary to carry out their work, "they denounce.

For all this, United We can consider that "given the public stance of certain political formations and professional police organizations against applying the recommendations of European bodies and institutions on the convenience of reforming Law 4/2025, on the protection of citizen security, The drafters of the opinion of the Venice Commission of March 2021 should express their deep concern about the legal and social implications that this has, since, trying to confuse Spanish public opinion about the advisability of the reform, it is germinated in Spain an interpretation contrary to the consolidated European legal and cultural heritage for the protection of human rights, fundamental rights and guarantees and public freedoms ". "So we call on the Commission to take into account with diligent attention what has been exposed in this report," they settle.