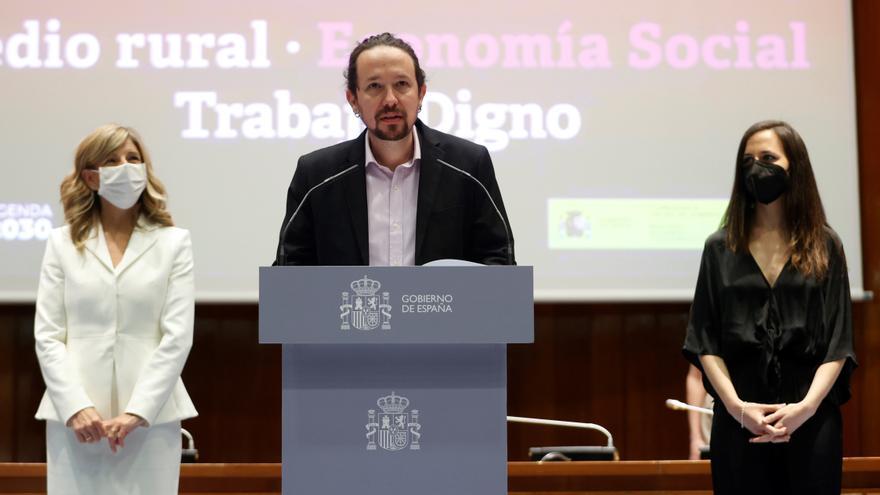 United We can consummate this Wednesday the replacement of Pablo Iglesias in the Government for his candidacy for the Madrid elections on May 4. The already former second vice president of the Government has given the witness to Yolanda Díaz, who will lead the minority partner within the coalition, predicting “a fundamental role in the democratic future of Spain” to whom he has said that she is “the best Minister of Labor “that the country has had. He has also delivered the portfolio of Social Rights and Agenda 2030 to Ione Belarra, of whom he praised the “work capacity and empathy”: “I have no doubt that this ministry is in the best hands.”

“Lately there is a lot of talk about the word polarization; but the true polarization has nothing to do with the statements of political leaders, it has to do with inequality. It is that 1% of the population accumulates as much wealth as the remaining 80%, that there are families that cannot access housing while vulture funds and banks accumulate thousands. It is generated by evictions, supply cuts and job insecurity. The interests of a minority that tries to prevail over the general interest “, said Iglesias in his last institutional speech.

“If we have achieved something, it is to face this crisis by putting the general interest ahead,” Iglesias continued, assuring that “there is no better guarantee” that we will continue to work in that direction than having Díaz as vice-presidency and Belarra at the head of the ministry. “I have to continue working from the position that I think I can be more useful. It has been an honor to be vice president. Go ahead, companions,” Iglesias said goodbye, who received a long standing ovation.

But it has been Iglesias who has received more praise than his substitutes. “All that has been achieved we owe it to the sacrifice, dedication and commitment of many people, I know. In all of them we recognize each other. But there is someone to whom today I want to express special gratitude. Pablo Iglesias. That, from the Second Vice Presidency, stumbled head-on with noise and fury, with the destructive work of those who proclaimed the futility of our effort – said Díaz -. Against all odds, well above suspicions and manipulations, Pablo Iglesias promoted the articulation of a social shield of rights that is currently an example for European democracies and a promise of the future and of dignity for this country. Thank you, Pablo. ”

“If someone has had a difficult time becoming vice president of the government of Spain, it has been, personally and politically, Pablo Iglesias. In return, I believe that our country has very few times sat on the blue bench of the Congress such an intellectually extraordinary man, politically very capable, with democratic principles deeply rooted in the ethical, “Belarra has started. “Neither in the most arduous moments, nor in the most difficult moments, has she forgotten who we are, where we come from and what interests we defend,” said the new Minister of Churches before leaving to “continue to fight the key battle against enemies. of democracy “.

Belarra has also referred to the new role that Díaz will have: “She is going to be a much better leader even than the Minister of Labor.” Díaz, for his part, has vindicated the weight that the Employment portfolio gains in the Executive when he is placed in the vice-presidency and has winked at the social agents: “Thank you Unai, thank you Pepe, thank you Antonio, thank you Gerardo,” he pointed out to the representatives of CCOO, UGT, and the employer-, for the generosity, for the effort, for your shared will to find solutions and reach agreements “.

In her speech, in the presence of all the ministers of United We Can and of Education, Isabel Celáa, for the socialist quota, has also alluded to the “unity” within the cabinet, going back to the management of the pandemic year when today marks one year since the Government promoted exceptional social coverage measures and was aimed at the total stoppage of non-essential activity through recoverable paid leave, “an emergency measure in an emergency context, which saved thousands of lives “, Has expressed.

“Neither I, nor any of those who were there, will ever forget the concern, the harshness of those hours, nor the determination that drove us: to save lives and save jobs in the midst of the most dramatic episode in our recent history, -. When then and now, someone, from a rostrum, wanted to boycott the action of this Government, believe me that, in the face of the outbursts, the reactionary rhetoric, the lack of solidarity and the apology for worse times, it was enough for us to look back It has been enough for us to evoke those days of unity and shared responsibility in the Government, to respond in the only possible way: we were there, we did it and we will continue to do it. We will continue to protect people, health, jobs, the productive fabric. and the economy of this country. ”

Both Díaz and Belarra have made reference to inequality and glass ceilings. The new third vice president has also raised the flag of feminism and mentioned the other three vice presidents: “It is a pride, I confess, to move, together with Carmen, Nadia and Teresa, towards that full horizon that feminism has given us. granted. An inclusive, diverse and transformative feminism, which feeds on the very matter of the future and which forms the nucleus of a better democracy. ”

Nadia Calviño, who assumes the second vice presidency from Iglesias although she has not participated in any act of relief, has taken the opportunity to set priorities in the new stage, although she has done so through a video. “I will continue working to promote recovery and tackle the imbalances that we have been going through for decades,” he said about his new responsibility.