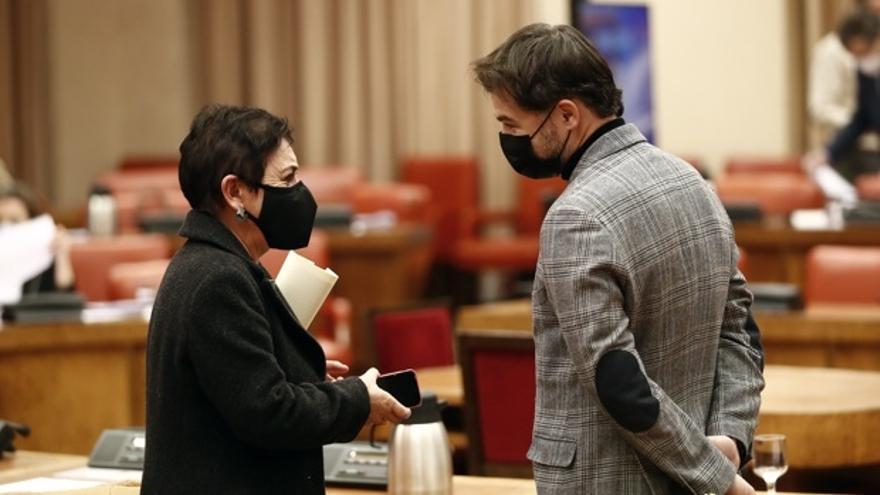 United We Can, coalition partner of the PSOE in the Government, as well as other formations that are usually parliamentary allies of the Executive and that facilitated the investiture of Pedro Sánchez or the approval of the Budgets have demonstrated this Tuesday against the increase in defense spending announced by the chief executive last night, in an interview in The sixth.

EH Bildu, Más País and Compromís have rejected this measure for predictably assuming a reduction in social items and considering that the priority before the invasion of Ukraine should be humanitarian aid. ERC, although it launches contrary arguments, has avoided clarifying its position and the PNV has not spoken. Apart from the partners, the CUP has also been against this increase.

This Monday, Sánchez assured that when he came to the Government, 1.25% of GDP was allocated to Defense and that currently that percentage has risen to 1.4%. But he explained his commitment is to "increase defense spending and set a horizon in the coming years to be able to comply with that NATO mandate of 2% of GDP." To approve this increase, the Executive would need the support of other groups in Congress given its parliamentary weakness, but for the moment it could not count on its usual allies and not even on its ally in the coalition.

"We oppose the increase in military spending because there is no need," said Aina Vidal, from United We Can. “What is urgent is to protect citizens”, she has said, because “there is a clear risk of an arms escalation at a European level”. “Spain has to stand out”, she has argued. "Social spending must be increased."

However, one of the most important partners of the Government, ERC, has avoided clarifying its position, which according to its spokesman in Congress, Gabriel Rufián, should be a collegiate decision agreed upon within the pro-independence formation. “What is convenient is to go to the data”, assured Rufián, who recalled that “this country clearly spends 20,000 million euros on Defense”. “They do not seem few to me”, he has pointed out. Rufián has assured that after the pandemic “the Health budget has been raised quite a bit” while “a few weeks of invasion have been enough for no one to doubt that all this can be solved with more weapons and war.”

“The arms budget is very high and there are issues beyond these,” he pointed out. “I defend Ukraine's right to self-defense and a response is in order, which also has to be diplomatic. There is talk with terrible frivolity of a World War III ”, she lamented. In his opinion, "what is happening" forces the left "to go beyond the banner." "The simplest thing is the banner, the easiest thing is to say no to war, but we have to go further," he said. Next, Rufián has assured that he wins primaries "playing the leftist" but governs "with right-wing impulses."

"There is an inexorable principle and that is that if the Defense item is increased, other needs are reduced," the spokesperson for EH Bildu in the Lower House, Mertxe Aizpurua, lamented at a press conference in Congress. "We already know who loses: social, economic and cultural policies," the spokeswoman for the Basque pro-independence formation has settled.

Íñigo Errejón, spokesman for Más País, considered instead that "when crises are caused by world powers, deterrence is worth little" and recalled that "Russia can invade Ukraine because Europe depends on its gas". For this reason, he has advocated reinforcing the measures towards an energy transition. "Beyond announcements in the heat of events, it is more urgent to invest in having psychologists in the public, that you can pay for gasoline or that citizens can put a washing machine," he assured.

“In an order of priorities, these are more urgent. Security goes through energy sovereignty”, he added. Errejón has also asked the Government for "another treatment and another relationship with Congress and the parliamentary groups."

"Sánchez spoke of an increase in Defense when what we should be talking about is reception policies and doing it well", has settled, for his part, the spokesman for Compromís, Joan Baldoví. In his opinion, it is more relevant that "solidarity" with the Ukrainian people should last "over time." "You have to take care of these people, you have to integrate them, you have to give them health and mental health," he said. Any proposal that negotiates it well, with time. No increase in defense spending and yes in measures to save industry and citizens. I prefer an increase in social ministries than defense ministries.