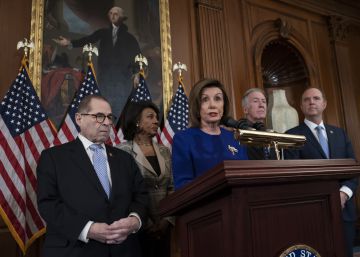 The trade agreement between the United States, Mexico and Canada is sealed. The governments of the three countries have signed on Tuesday in Mexico City the latest modifications to the free trade agreement on which the economic stability of the North American region depends. Although the negotiations ended in November 2018, the United States, through the Democratic legislators, demanded in Mexico last year to raise the standards of working conditions, so the Latin American country undertook a reform to its Law on job.

TMEC negotiators –– Robert Lighthizer, United States Trade representative; Jesús Seade, Undersecretary for North America by Mexico; and Chrystia Freeland, Deputy Prime Minister of Canada–– signed at the National Palace the modifications to the treaty that contemplate new conditions in labor, environmental, biomedicine, and for the content of the automotive industry. The Mexican president, Andrés Manuel López Obrador, attended as a witness the final closing of the negotiation that lasted almost two and a half years.

Confirmation that the treaty will be ratified by the congresses of the United States and Canada – Mexico will make a second revision – arrives at the last minute and just a few days before the US Congress closes for the Christmas break and a month after Start presidential campaigns in the US Trump, Trudeau and López Obrador held a telephone conversation at noon, minutes before signing a protocol modifying the treaty. "We both thanked them for their valuable participation and support to sign the TMEC," López Obrador has written on his Twitter account.

With the transformative changes we won, Democrats have achieved a #USMCA agreement that is infinitely better for American workers than what was originally proposed by the Trump Administration. pic.twitter.com/LywXwZjWTy

The TMEC could be approved before December 20 and would be noted as an achievement by President Trump in commercial matters in the US, while facing the impeachment process in his country. The US president asked for two and a half years ago to open the negotiation of the North American Free Trade Agreement (NAFTA) that took place with the Government of former Mexican President Enrique Peña Nieto and in the first period of Government of the first Canadian Minister Justin Trudeau The modifications occur when López Obrador already occupies the presidency of Méxio and Trudeau starts his second term as prime minister.

"We've got the best trade deal in history," said US negotiator Robert Lighthizer at the signing of the final agreement. The Mexicans agreed to create a panel for dispute resolution in labor matters; They also yielded in the request of the American automotive industry to comply with 70% of North American content in the production of automobiles that will be reviewed in seven years in the steel components and in 10 years in the aluminum. For their part, the Americans stopped insisting on the 10-year protection for biomedical patents.

“It is an agreement that helps us boost the economic growth of our nations, without a doubt it means more investment for Canada, the United States and Mexico. It is about attracting more investment for North America and as we all know if there is investment there is growth, if there is growth there is well-being, if there is well-being there is peace and there is tranquility, ”López Obrador mentioned in the act in which he signed the agreement. The Mexican president added that the TMEC will also serve to improve the social conditions of the region in the face of migration.

The negotiators recognized that the process has been anything but easy. López Obrador said there was a moment of "disagreement" and "breakup" with Trump but that negotiations continued. "We have done it together at a time when it is very difficult to get trade agreements to go ahead," said Canadian Vice Minister Chrystia Freeland.

Democrats give Trump a victory

The president of the House of Representatives, Democrat Nancy Pelosi, announced Tuesday its support for the free trade agreement between the United States, Mexico and Canada that will update the old NAFTA, effective since 1994. "This is the day we were working to say yes," said Pelosi. The yes to the new treaty, a priority in the economic plan of President Donald Trump, comes the same day that the Democrats – with Pelosi in the lead – formalize the accusation against the president for abuse of power and obstruction to Congress.

He AFL-CIO union supported the new treaty minutes before the announcement of the president of the House of Representatives. “This is more than a triumph for unions. It is a triumph for all workers, ”said Congressman Richard Neal, the main Democratic negotiator. The objective, he explained, was to get the new treaty to solve the past problems when applying the provisions of the agreement in a more firm and resounding language.

Asked if the US inspectors will be able, thanks to the new treaty, to appear in factories in Mexico to verify that labor standards are met, Congressman Richard Neal responded with a sharp yes. It was one of the key demands of the unions. "We have reached an agreement that can proudly support the working class," said Richard Trumka, president of the AFL-CIO.

Violations of the treaty, he said, will have serious consequences. Neal insisted that the negotiations were in good faith although he admitted that at times they were very hard. "It was an opportunity we could not pass up," he concluded, reiterating that a new treaty will be "significantly better than Nafta" not only in labor matters, but also in the environment and the pharmaceutical sector.

"The original agreement was not acceptable," Pelosi insisted, "it had to be modified." A delegation of Democratic legislators will travel to Mexico to meet with President López Obrador to present the changes. Then to Canada. The pact was announced with the impeachment process of Donald Trump entering a decisive phase. "We didn't know what day the agreement was going to happen," he said.

To reach ratification, the Mexican government promoted a labor reform this year to improve the conditions of workers, and promised the disbursement of 900 million dollars over the next four years to change the labor justice system. López Obrador also guaranteed to US lawmakers that the minimum wage in Mexico will increase at least 2% above inflation every year.

Both Pelosi and Neal repeated that Trump's trade agreement was "deeply flawed" and that thanks that they remained firm in the negotiation they managed to improve it. Among the other points at which they obtained what they were looking for, they cited the elimination of the provision that protected pharmacists in new biological medicines and changes in the combs of disputes.

Democrats insist that both Mexico and Canada agreed to the changes they raised and that this will allow the treaty to work “infinitely better” for US workers than the proposal presented by President Donald Trump. The Pelosi press conference, accompanied by Democratic negotiators, occurred two hours before the signing in Mexico City.

President Donald Trump went to social networks to say that TMEC will be the "best and most important trade agreement" ever achieved by the United States. "It's good for everyone," he continued, "farmers, manufacturers, energy and unions." "Most importantly," he concludes, "we will put an end to the worst trade agreement, NAFTA." The Republican came to threaten as a candidate to withdraw to the United States if he did not modernize.