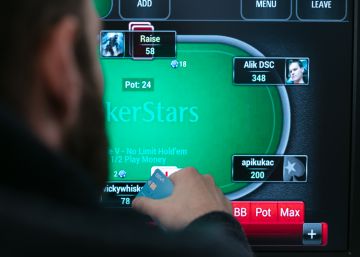 The British people love to bet. There is no event, however bland, that has not become a game of possibilities with money involved. To the point that the media takes bookmakers' predictions as seriously as pre-election polls. In the United Kingdom there are about 430,000 people with a serious gambling problem, according to the GambleAware association that fights this disease. This week has achieved a great victory. On April 14, the Government will ban the use of credit cards to bet, also on-line, as announced by the National Game Commission (CNJ). From then on you can only play with debit cards and cash deposits (except for the national lottery).

"With this ban we try to minimize the potential damage that consumers can suffer when they bet on money that they don't really have," said Neil McArthur, the director of the CNJ.

As a bait to retain its customers, the main betting sites on the Internet (PokerStars, Betfair, 888 or Bet365) allow users to refill their bags with the credit line of their cards. UKFinance, the independent auditor that watches over the British financial sector, estimates about 800,000 people who routinely use credit cards to bet. 22% of those people, that is, some 176,000, are ludopaths, according to the CNJ.

“If you want to operate in the market in a safe way, the gaming industry has a responsibility to prevent the occasional desire to make a bet from becoming a dangerous habit. That is why I ask you to establish as soon as possible a detailed plan of action to reduce the risk of serious gambling disorders, ”wrote the head of Mental Health of the National Health Service (NHS), Claire Murdoch, to the CNJ in the months prior to your decision on credit cards.

Following the announcement of the British Government, in Spain, consumer associations and against gambling have not taken long to require the new Ministry of Consumption, led Alberto Garzón, to apply the same measure. Meanwhile, ministry sources say they have not studied the issue and that it is too early to "mark positions." In Spain the number of ludopaths amounts to about 400,000, according to the Spanish Federation of rehabilitated gamblers.

The Federation of consumers and users (Facua) believes that the initiative would be "key" to combat gambling. In a statement it also calls for the ban on ATMs inside the game rooms, since, like credit cards, they encourage compulsion to continue taking risks, they create an even greater problem of indebtedness and multiply the risk of addiction. Following in the footsteps of the British Government would be “a first step” towards the prevention of gambling, his spokesman Rubén Sánchez values: “It is not the same thing that a player spends the money he has and sees, to spend the top of his card".

"The British Government has shown that it is not so difficult to put measures so that players do not get into debt," adds from its Association of Financial Users (Asufin), its president, Patricia Suárez. "We cannot forget the economic leg of the problem," he adds. “It is one thing to play for leisure and another to borrow to continue playing. This profile does not interest the financial sector. ” The association also points out that being able to pay on credit these services undermines the idea of ​​“responsible lending” enshrined in the Sustainable Economy Law almost a decade ago. "We are surprised that when requesting a loan, the solvency of the potential borrower is evaluated and, in the case of the game, you can make use of a credit without anyone verifying if you can afford it."

Regardless of the financial, gambling is a disease. Therefore, Susana Jiménez, head of the pathological game unit at Bellvitge Hospital, also applauds this initiative. "Any protection strategy for the person who is playing is good." In the leading unit, they help more than 300 new patients per year. The psychologist warns of the phenomenon of rapid microcredit, increasingly common among game addicts. “We have cases of people who arrive with more than ten debts that they have not been able to pay back; they are not very high figures, but they have very high interests. ”

Paco, 51, remembers perfectly the day he made his first online bet, more than 12 years ago. He was leaving work and saw a Botemania announcement of virtual slots. “I started to play out of boredom. I saw that it was very easy to enter; They just asked me for the card and confirmed that I was of age and I liked it. And then I was totally hooked, to the point of ruining myself family and financially, ”says this father who prefers not to give his last name.

He was playing compulsively for three years and estimates that he lost around 30,000 euros. "And I am one of those who have spent little," he acknowledges. "I spent what I did not have, what was not mine and what caught me out there." He asked his friends, his wife and several loans to Citybank and Cofidis for money. "At the time when the cards did not give for more, the calls I received were for non-payment and my wife kicked me out of the house, I asked for money to play the slots in the bars," he says. Paco believes that prohibiting the use of cards "is not enough": "It is a disease and the same thing happens as alcoholics: you need it and do anything to get money for your drug."

Today Paco is a member of Gamblers Anonymous, an association that accompanies and helps people with gambling addiction problems, and has recovered his family. “In these eight years without playing, I recovered my wife, I had a son and I regrouped all my debts. I don't want to go back to that bottomless pit. I have a life that I like as it is. ”