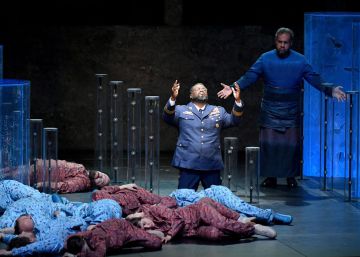 Showgirls, dancers and singers took the stage in thanksgiving to transfer the allegory of the fraternity to the stands. Different races, clothing and cultures. A hymn to peace and harmony that resented his own cursilería; that he intended to alert against the denial of climate change; and that ended an extravagant and arbitrary spectacle of Idomeneo, although it is not appropriate to mention the title of Mozart's opera in its entirety.

This was announced on the posters of the Salzburg Festival and it premiered this Saturday, but Teodor Currentzis (musical direction) and Peter Sellars (dramaturgy) exposed it to a review and scrapping. Not only suppressing recitative and even characters -Arbace was reduced to the minimum expression-, but incorporating fragments of other operas –Thamos, king of Egypt– and turning the Rondo for soprano, piano and orchestra KV505 in the center of gravity of the last act.

It was interpreted with sensitivity by the Irish mezzo Paula Murrihy (Idamante) on behalf of a cast that most resembled a United Nations mission. The American tenor Russell Thomas, vociferous and careless Idomeneo, shared ovations with a Chinese soprano -Ying Fang (Ilia) -, a South African colleague (Levy Sekgapane) and even a bass from Samoa.

They knew how to sing, it is true, but not with the excellence that Salzburg requires. And yes with the requirements of United Colors of Mozart that prevailed in the political-poetic reading of Sellars. The great ovations of the public demonstrate that the transgressive behaviors of yesteryear have yielded to aesthetic scruple and goodism. Sellars went on to say that the oceans of love are the remedy for environmental misfortune, now that the seas devour the mainland.

Such a sweetening perspective predisposed a claim on climate change that Sellars conveys conceptually and allegorically. The dramaturgy begins with an explicit allusion to the refugee crisis, taking advantage of the fact that the Mediterranean passes through Greece –Idomeneo It is originally in Crete, under the trident of Neptune, but the American filmmaker is more interested in the abstract derivatives of oceanic iracundia. And it describes a sea of ​​modern plastics and archaic creatures whose moral retaliates man's challenge to higher powers.

The biggest flaw of production lies in the ramblings and mental onanisms. The best virtues lie in the aesthetic space and the scenic atmospheres, more or less as if they represented the acoustic box that Teodor Currentzis agrees to expose the wonders of his amazing musical reading.

Peter Sellars (Pittsburgh, 1957), agitator of the operatic scene in the last 30 years, retains his extravagant, playful appearance, but the "enfant terrible" of yesteryear has engendered a less provocative stage director explicitly – it was his " Don Giovanni "from Harlem- and more sophisticated aesthetically and conceptually. A good test is offered by its approach to "Idomeneo". He had already directed Mozart's opera in 2003 for the Glyndebourne Festival (South London), but then he was surprised and even outraged by the extrapolation to the Gulf War. There were even Festival sponsors who were outraged at the proposal, just as the assembly had an incendiary effect on the audience. It has been 16 years since then. And there has been an evolutionary path that has led to an equally political "Idomeneo" reading – the climate dominates the agenda – but less aggressive and controversial. This is demonstrated by the enthusiasm of the "conservative" viewers of Salzburg. Or not so conservative, as the Austrian Festival has been at the forefront since the time of Gérard Mortier (early 1990s) and Sellars himself was one of his great supporters.

All the colors that Sellars puts at the service of the announcement of Benetton, Currentzis shades and explores them in waves of the choir and the combustion of the pit. That it is not a moat, but the crater of the volcano, the telluric cleft from which a Idomeneo Trepidant and subtle, powerful and light, rich and intense.

The Greek teacher did not appear with the orchestra he created in his image and likeness (MusicAeterna). He did it with the hosts of the Baroque Orchestra of Friborg, a prodigy of virtuosity and plasticity to which Currentzis contributed his shamanic qualities.

Salzburg has found the priest he was looking for for exegesis and hermeneutics of Mozart. An eccentric and heterodox director, but provided an instinct and a musicality that transubstantiates his interpretations in lysergic experiences. By dynamic. By chromatism. For theatrical tension. And because its integrative capacity between the pit and the singers – the homogeneity – does not contradict the peculiarity of the soloists, the minute detail, the goldsmithing of an implausible sound.

Currentzis reads and listens. He is the master of the circus. He knows when the sad clown has to appear and when the lion tamer should do it. The neat Ilia of Ying Fang played the first role, as if Currentzis rocked her in his arms, while the imposing Nicole Chevalier took advantage of the aria of Electra's spite to set fire to the Salzburg theater. A flamboyant version that the Greek teacher excited with the gesture of a possessed.

It was the contrast to the backwater of the last scene. Sellars and Currentzis decided to finish the opera not as Mozart established, but with a previously written ballet whose exotic choreography Lemi Pontifasio dealt with. Samoa native. And a step-by-step two disconcerting architect who was given shape by a Polynesian dancer and a Kiribati dancer, thus persevering in the pedagogy of the islands threatened by the challenge of humans to the heavens.

It was about proposing to the spectators a poetic exercise about the love and harmony of nature, more or less as Pedro Sánchez stated in his hyperglycemic investiture speech. A risky and very debatable extravagance that the spectators tolerated with the same naturalness with which they consented to the misrepresentation of Idomeneo in Mozart's own house.

“Like a miner, I have gone to the depths of myself”