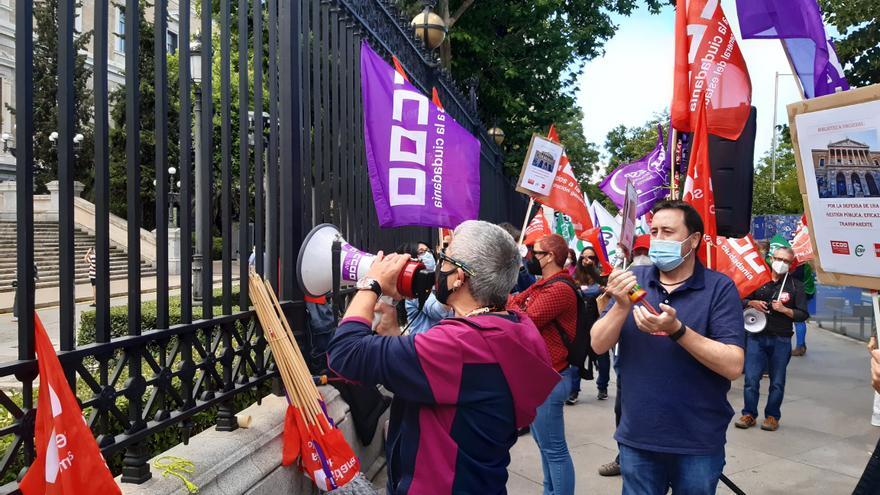 Madrid, Jun 21 (EFE) .- The unions have gathered this Monday in front of the National Library (BNE) to request the resignation of its director, Ana Santos, whom they consider responsible for the lack of personnel and the “loss of prestige” that they assure that the institution suffers.

A hundred people summoned by the three trade union centrals with representation in the BNE -CSIF, CCOO and UGT- have demonstrated in front of the headquarters and have chanted shouts like “Ana Santos go now” and “The civil servants want us to be recognized our work”.

According to the UGT, the institution had a deficit of public employees at the end of 2020 to cover the jobs since of the 509 positions it has, they have to be filled with a workforce of 243 civil servants and 126 labor, so there are 140 vacancies.

“People are leaving because they are under pressure. The positions are not being filled, more and more is demanded and people do not want to come because there is a lot of work, a lot of pressure and there are no means,” said Mari Carmen Núñez, a public employee of the BNE, which describes Ana Santos’s management as “bad”.

CSIF has warned of the “threat” of outsourcing the services of the National Library and the Administration as well as the “deterioration of its public image”.

“The consequences of this management is that they have outsourced even practically basic services of the State Administration, such as personnel service,” said Jesús Rodríguez, UGT representative on the BNE works council.

“The best solution is for him to resign because he refuses to negotiate a work schedule without recognizing previous agreements such as the labor agreement. He wants to force half of the vacations to be in summer and he does not want to recognize that working hours are sometimes special” , has pointed out Emilio Murcia, secretary general of CCOO in the BNE.

For tomorrow, Tuesday, a meeting of the works council with the secretary general of the Ministry of Culture, Javier García Fernández, the director and the Personnel Board is scheduled.