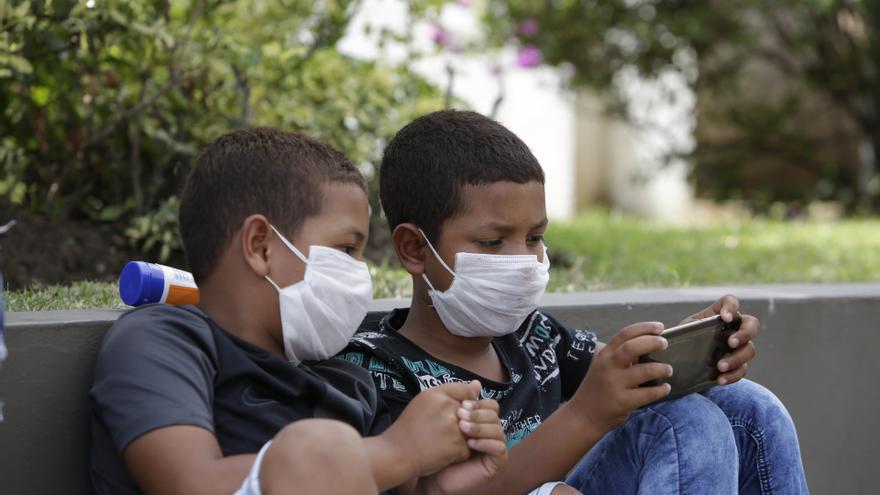 The coronavirus pandemic in Spain has strongly shaken the mental and physical health of the most vulnerable minors. 88.9% of the parents noticed changes in the emotional state of their children and 71% of the entities of the third sector confirmed a physical deterioration derived from confinement. These are data offered by Unicef ​​in its latest report, Impact of the COVID-19 crisis on the most vulnerable children, which has information collected in recent months by non-profit platforms that work side by side with families at risk of exclusion.

In the case of mental health effects, the document highlights four main problems. Those related to the excessive use of screens in confinement -that Unicef ​​has already asked to limit to an hour and a half a day in children up to 12 years- Those related to boredom and lack of stimulation, uncertainty and misunderstanding, and lack of relationship with friends.

All this, together with the conciliation problems of mothers and fathers, "has resulted in greater stress and a bad family environment" that ends up affecting the little ones in the house, according to the report. The most common derived symptoms are "difficulty concentrating, disinterest, irritability, agitation, nervousness, feelings of loneliness and worry," he lists.

"I have family in Peru and I have been especially concerned about them, because I think the situation is worse. It is my family who has been the worst for me," says Pablo, 12, in one of the testimonies collected by the Council of Participation of Vícar (Almería). In addition, all entities speak of an exacerbation of symptoms in previous mental health pathologies, as a result of the difficulty in their management by the parental figures and the lack of "respite resources".

However, Unicef ​​also points out that "excessive pathologization of the emotional responses in many children and adolescents ", since the novelty in the current circumstances can cause exceptional behaviors that are reversible.

Another point that worries the organization is the worsening of physical health, which has been reported by 71% of the front-line entities with which Unicef ​​has collaborated. "The lack of physical exercise has negative consequences for both physical and mental health," the report warns. Likewise, they detect an increase in eating problems, "especially due to an insufficient diet and an excess of unhealthy eating".

A few weeks ago, the same NGO warned that being overweight was the weak point of Spanish minors, which had worsened during the pandemic, since 34% of boys and girls in Spain are overweight or obese.

"Not being able to go out has been difficult for me, because being 7 people cloistered in an apartment and without being able to even go out to the balcony has been a bit overwhelming. Physically, not being able to play sports, I have also noticed it, I was bored I was eating all the time ", admitted Hirut, 18 years old to the Participation Council of Ponteareas (Pontevedra). "Anyway, if we have to confine ourselves again, I understand that we will do better," admits the teenager.

Single-mother families, the most affected

The economic and employment situation of families is also a key factor when analyzing the welfare of minors. Focusing on households with children, the report infers that those affected by the loss of employment of some or all of the members amount to 250,000 households, "of which 6% would be single-parent or single-parent."

The latter, however, have suffered a greater impact derived from the pandemic, since in 26% of these family units, the adult person has become unemployed. "Taking into account that three out of every four boys, girls and adolescents in single-mother households were in the two lowest income quartiles before the crisis, this decline in employment is directly impacting the most vulnerable single-mother families", specifies the text.

The data vary considerably between autonomous communities, being Andalusia, the Community of Madrid, the Valencian Community, Castilla La-Mancha and the Canary Islands the five in which children and adolescents have been most affected by the loss of employment of their parents .

The digital divide and educational disadvantage continues in this new course

86% of the entities that have participated in the report report that "the children have had problems to continue with the school year" due to the physical closure of the classrooms. The digital divide was an essential scale to measure the unequal access of families to distance education, but its consequences, according to the report, have gone further. "Not only in educational terms, since one of the main mechanisms for their socialization, access to a balanced diet and a place to detect situations of vulnerability or violence in the family environment, has been lost," says Unicef.

"I felt more and more tired as the days went by. Not all children have the same possibilities, because it is difficult to do homework on a mobile phone or without an internet connection," says Isaac, 11, through the Foundation. Gypsy Secretariat. Those responsible for the entities believe that this situation has affected mainly foreign families, with few resources or those already mentioned monomarental.

The conclusion of the report is that, before COVID-19, there were already serious inequalities that affected children. However, the survey shows that they are worsening due to the socioeconomic consequences of the pandemic, which require monetary and humanitarian action. "We are facing the challenge of the worsening of child poverty and inequalities, together with mental health problems," concludes the report, for which UNICEF has also presented an Action plan filled with recommendations "in the context of the crisis that we still face today. "