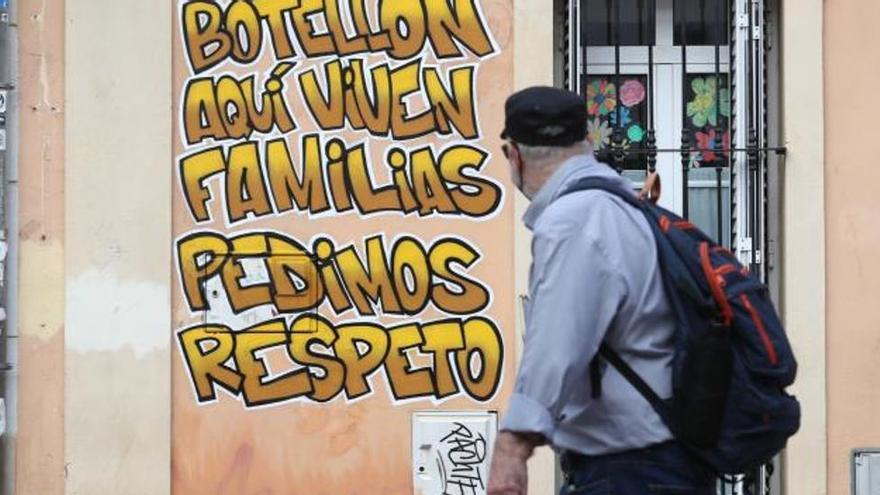 The festivities in the Plaza de Benimaclet begin on Thursday night and last until early Sunday morning. The yelling, music, crowds, drinking and even fighting, have become the nightmare of the residents of the area. One of them, Vicente, denounces that there is no “police presence at night and we cannot walk the streets in the morning because they are full of dirt”. In this sense, José Herreras, another of those affected, adds that the Police “do nothing” and “we are fed up since, for example, this weekend it was the neighbors themselves who had to go out to clean the streets with bleach. because they leave everything lost “.

Downtown Benimaclet was packed with people this weekend.

The shops themselves clean

The shops in the square also suffer the consequences of these large bottles. Thus, the owners of the Estudio 64 bookstore state that they have to arrive “an hour before to clean because it is all full of dirt, beer, broken glass and bad smells”, which, in their words, “damages the image of the business” . He adds that the discomfort of the residents “is latent”, since “neither the police nor the city council are doing anything to solve it.”

“They have taken over the square”

They explain that this problem “it has grown after the pandemic and the university students have taken over the square “. “It’s horrible, they drink to drink and every weekend the same story is repeated,” exclaims the neighbor María Dolores Salinas.

David indicates that, in addition, “the vandalism of those present is added, who paint the facades of the buildings” and adds that “you only need to take a look at the houses to see how they are.”

“My street is a river of urine”

Thus, the neighbors have decided to respond with graffiti. In them, they denounce ‘No bottle. Families live here and we ask for respect ‘and one of them has even decided to write several sentences on the walls of his home such as’ Les teues pixades no ens deixen respirar’ or ‘Benimaclet is not a WC’. Denounce that your street “It is a river of urine and I have had to confront them because they piss at the door of my house “. “I have to put on the mask to be able to enter my house because of the smell of the area.” This woman adds that if they do not provide solutions, “they will get people to leave because we cannot live here, so we need more awareness.” In this sense, David emphasizes that many rented people “have decided to abandon their homes, since they cannot bear the situation.”

The consequences of these bottles have become part of the neighbors’ conversations. “Why do we have to pay with our taxes to clean up something that we are not guilty of?” One of them wonders.

Ribó asks the youth to respect “the rules of coexistence”

The mayor of Valencia, Joan Ribó has asked “young people, restraint in the use of alcohol and respect for the rules of coexistence” after being fed up with the bottle that residents of neighborhoods such as Benimaclet, Plaza Honduras or Marxalenes have shown . Ribó announced that he is going to convene “a meeting with the Local Police” to address solutions to macro-bottles to “guarantee the right to rest.”