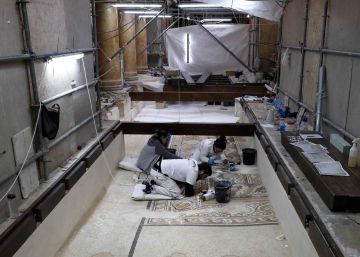 The Unesco has declared the conservation of the Basilica of the Nativity of Bethlehem free of danger, place of birth of Jesus Christ according to Christian tradition, after the exhaustive rehabilitation undertaken in the monument for six years. The World Heritage Committee of the UN body for culture has removed the temple and the adjacent pilgrimage route from its catalog of endangered sites at the request of theto the Palestinian Authority, which requested its special protection in 2012 in view of the damage caused by leaks in your roof.

The interior of the main pilgrimage center of the cradle of Christianity has remained covered by scaffolding for more than three years, while foreign and local teams ofStarers returned the original splendor to the few mosaics from the Crusader era (12th century) covered with gold tesserae that still houses the basilica, built in the 6th century on an original church from the year 399. The passage of time and the pilgrims, the smoke of candles and incense burners, abandonment and even the Israeli-Palestinian conflict, which led to the occupation of the temple in 2002, They contributed to its deterioration.

In addition to the roof, the narthex or inner atrium, capitals and columns, the exterior facades and floor mosaics, among other restorations, have been restored. The Unesco Committee has considered in the meeting held in Baku, capital of Azerbaijan, that the pending work is proceeding apace according to the available budget, covered with more than 18 million euros contributed by the Palestinian Authority and international donors, according to a Communication of the United Nations Organization for Education, Science and Culture.

The International Council of Monuments and Sites also recommends the recovery of the historic center of Bethlehem, especially the street of the Star, which is part of the pilgrimage route protected by the UN, so you can count on shops and homes in order to attract tourism The historic road through which the Pesebre square and the Basilica of the Nativity were accessed in the past was rehabilitated two decades ago, largely with funds from Spanish cooperation.

The Unesco was in 2011 the first United Nations body that recognized Palestine as a full member. Apart from the so-called Place of Birth of Jesus, it maintains in the catalog of world heritage sites the cultural landscape of the tiered terraces of olive trees and vineyards of Battir (southwest of Jerusalem, in the vicinity of Bethlehem), since 2014, and the Hebron's historic quarter (south of the West Bank) since 2017. In the latter case, Israel protested the decision to consider that the site of the Cave of the Patriarchs, called Ibrahim Mosque by Muslims, is part of the Jewish historical heritage.

At the request of Jordan, the historic walled precinct of Jerusalem It is also incorporated since 1981 in the list of Unesco world heritage in danger. The Old City – which includes the Christian Basilica of the Holy Sepulcher, the Jewish Wailing Wall and the Temple Mount, with Al Aqsa and the Dome of the Rock – is integrated into East Jerusalem. The eastern part of the Holy City remained under Jordanian administration after the extinction of the British Mandate over Palestine, in 1948, until its military occupation by Israel in 1967.

Israel has nine sites declared a World Heritage Site, none of which is in danger. Among them, they disregard the remains of the historic fortress of Massada, near the Dead Sea; the monumental Crusader and Ottoman hull of San Juan de Acre, on the coast of Galilee, or the White City of Tel Aviv, district in which buildings of modern architecture stand with prominent exponents of the Bauhaus school. Amid the bitter geopolitical disputes that affect the cultural heritage of the Holy Land, the Israeli Government has withdrawn its representatives from Unesco Following the steps of the Administration of the US President, Donald Trump, who accused the UN agency two years ago of showing a marked "anti-Israel bias".