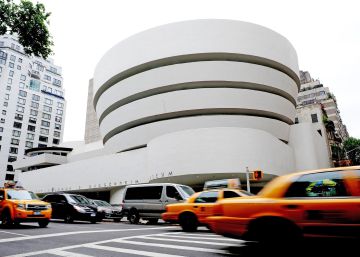 To places like Yellowstone National Park, the Grand Canyon or the Statue of Liberty, a series of architect Frank Lloyd Wright's buildings located in the United States have been added this Sunday to the list of World Heritage declared by the United Nations Organization for Education, Science and Culture (Unesco). The eight buildings, built mostly in the first half of the last century, they are American historical heritage. The set of works selected from more than 400 designs of the master of American architecture has been entitled "The architecture of the twentieth century by Frank Lloyd Wright". The committee explained that the selected buildings reflect the "organic architecture" developed by Wright, which includes "an open plan, a blurring of the boundaries between exterior and interior and the unprecedented use of materials such as steel and concrete"

At the forty-third meeting held by the World Heritage Committee, this time in Baku, Azerbaijan, the United States managed to add a new work (albeit a set) to the 23 that were already declared world heritage by Unesco. Among the prominent buildings of Wright (1867-1959), appears the cylindrical Guggenheim Museum of New York, finished months after his death. The architect conceived the spiral building as a "temple of the spirit". Another building recognized by the committee is Unity Temple, a Unitarian Universalist church located in Oak Park, Illinois, and built between 1905 and 1907. The entrance to the 20th century was a very fruitful period in the career of the architect and this was his most important work. famous at that time: it was his initiation with reinforced concrete and he dared to expose the electrical installation as part of the design.

"Each of these buildings offers innovative solutions to the needs of housing, religious worship, work or leisure. Wright's work of this period had a strong impact on the development of modern architecture in Europe, "describes the World Heritage Committee. The other six selected buildings include the Frederick C. Robie House in Chicago; the Taliesin in Spring Green, Wisconsin; the Hollyhock in Los Angeles; Fallingwater in Mill Run, Pennsylvania – from one of its terraces is born a waterfall that flows into the river-; Taliesin West in Scottsdale, Arizona; and the first Herbert House and Katherine Jacobs in Madison, Wisconsin. The latter is considered his immersion the Unisonian concept.

Wright began to build the Usonian houses from 1934, in response to the economic crisis in which the US was submerged after the Great Depression. The materials were natural and of low cost, thought so that the families of the middle class could access the houses, which used to be L-shaped because they were built in places that were not comfortable for a traditional building. The designs were simple, but modern, and the architect thought them according to the natural environment in which they built the houses. At that time, Wright advanced: "An American home will be a product of our time, spiritually and psychically. It will be a great work of art, respected throughout the world, for its integrity, its real value. " The master of American architecture wanted to reflect the spirit of his country in its constructions, and that these would dialogue with the outside. From now on, part of that idea is the list of 1,092 World Heritage sites.