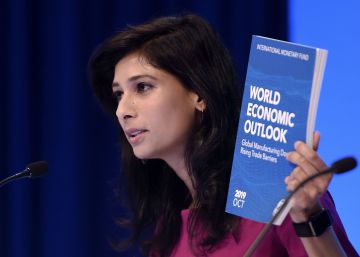 He International Monetary Fund puts the long lights on the Spanish economy. And it shows that the problems that affect it – stoppage and public debt, above all – will continue for a long period of time. In the next five years, the unemployment rate is not going to fall by 12% and the public debt to GDP ratio will remain above 90%, according to forecasts published on Tuesday. In addition, the agency lowers its growth forecast for this year, which leaves at 2.2%, still well above the European average.

The growth forecast cut comes from Washington the same day the acting government decided to do so. The two organizations cut their tenth forecast for 2020 and agree to leave it at 1.8%. But they differ in what will happen this year. The Fund is somewhat more optimistic than the Ministry of Economy. The body that directs since late September Kristalina Georgieva forecasts for 2019 an advance of the activity of 2.2% compared to 2.1% expected by the Department headed by the minister Nadia Calviño, who aspired to the position that Georgieva now has. This difference is explained because the Fund has not had time to update its calculations after the INE corrected the historical series downwards. The new statistic reveals that the economic slowdown in Spain has been more acute than initially estimated.

But more worrying are the IMF's long-term projections. According to these calculations, the growth of Spanish GDP will be 1.59% in 2024, close to its potential. During the next five years the activity in Spain will be posing like a feather on a potential growth of 1.5%. Therefore, the agency demands structural reforms to relaunch the activity.

The IMF projections also highlight the structural problems that the Spanish economy is dragging. Among them, the high level of unemployment. Within five years, the Fund expects the unemployment rate to still remain at 12.5%, a barrier from which it will cost to lower. It will not be until 2021 when it crosses the 13% barrier, half of the maximum recorded at the end of 2012.

Spain will barely be able to correct its budgetary imbalances until 2024. The public deficit will barely lower 1.88% of GDP in the next five years. In that period there will be virtually no adjustment of the structural deficit. The only reduction in the red numbers of the Public Administrations will occur between 2019 and 2020, when the Fund includes any of the income measures that the Acting Executive of Pedro Sánchez had included in the 2019 Budgets that finally did not see the light.

Finally, the public debt, one of the main indicators to determine the financial health of a country, will continue above 90.53% of GDP at the end of 2024 despite the fact that the economy will then have chained almost a decade of growth. The bonanza of the coming years will reduce the debt ratio, as the economy grows more than the total amount of indebtedness will. But it will very slowly. This slow pace of debt reduction leaves Spain with a low fiscal cushion to face future crises.