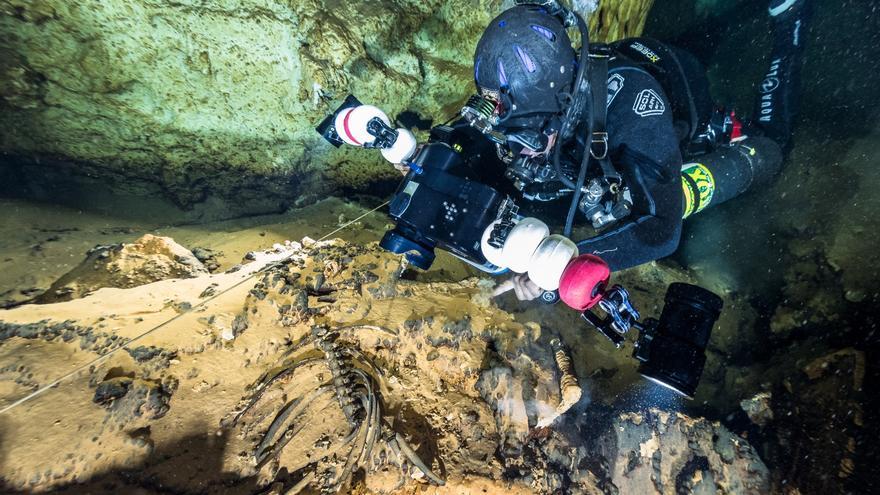 The Iberian Peninsula has been the gateway and bridge of civilizations. The sea, highway to reach the mainland. Phoenicians and Greeks have passed through here, Carthaginians and Romans have landed. In Andalusian times, Córdoba connected with Baghdad and, centuries later, galleons left for the chocolate of the Americas. The seabed is full of “treasures” that help us understand our history. Underwater Heritage is made up of “traces of human existence that have a cultural, historical or archaeological character, that have been partially or totally underwater, periodically or continuously, for at least 100 years”, according to UNESCO.

Underwater archaeologists shy away from talking about treasures, because heritage is priceless and its value lies in knowing what we were in order to know what we are; That is why in the 2001 Convention, UNESCO prohibited looting and exploitation, as well as encouraged to protect – and safeguard – objects, human remains, ships or aircraft and cargoes nestled under the sea.

Carlos de Juan is an archaeologist and has been working in this underwater discipline since 1996. He is a professional diver and directs the investigation of the Bou Ferrer Wreck: a ship from the time of Nero found a thousand meters from Vila Joiosa beach (Alicante) and 28 meters from depth, and loaded with more than 3000 amphorae of oil. “Our objective is not to remove ancient things from under the water,” he explains to elDiario.es, “we went to the site with questions: we want to know about antiquity, about how these societies lived. And to obtain answers we carried out the archaeological excavation under the sea”.

For UNESCO conservation in situ of the deposits is a priority, it is only authorized to lift them from the water “when they constitute a significant contribution to the protection, knowledge or enhancement of heritage.” So the first step – and the most momentous – is to document what is found at the site, and read it through the archaeological and cultural context.

“We have to open our perspectives and think that the Underwater Cultural Heritage are not only remains of ships and amphoras under the sea,” says the underwater archaeologist Rocío Castillo Belinchón from the National Museum of Underwater Archeology, located in Cartagena, “We can also find remains oldest in continental waters, burials such as the Guadalperal Dolmen, which remained submerged in the Valdecañas reservoir (Cáceres) or a Neolithic town such as La Draga, located under the waters of Lake Banyoles and on the shore of it. as remains of submarines or sunken ships in the 1st and 2nd World War “.

Castillo Belinchón assures that “the comrades from Catalonia are excavating the town under water because part of it remained on the shore of the lake and part underneath.” The findings at La Draga do not stop: 2.5 million-year-old saber teeth have been found. That is why the first step of underwater archaeological work is so important: documenting everything. “Dry work in libraries, reviewing records and archives, looking at museum materials, and in our specific case, studying the cartography of the coastline, ports and rivers. In addition to collecting oral information from both fishermen and local agents “, says Rocío Castillo.

You cannot excavate without permission and for the authorities to give it to you “you have to present a comprehensive project: from documenting, planning, developing prospecting in the excavation, and if material is removed, having the support of conservators, programming the laboratory from the studio and the museum to which he will go. ”

Research is as important as dissemination: in the National Museum of Underwater Archeology the remains of the Phoenician ships of Mazarrón, located on the Playa de la Isla between 1991 and 1994, or the site of the frigate are preserved. Our Lady of the Mercedes, protagonist of the looting of the Odyssey case in 2007 and subsequently of three documentation and excavation campaigns led by the museum between 2015 and 2017.

The Bou Ferrer archaeologists have excavated the area of ​​the stern where the pantry for the crew’s food would be found. “There we found two universes, the port of Rome, Ostia; and the other the one around Gades. We have studied the ceramic pieces of the tableware with which the sailors ate. There are some vessels that contain salted fish, which would be like our can of tuna, and we know that it is a production that was made in the Ostia port. And we have the Dressel 20 parva amphoras that carried oil for the crew’s food, produced in the Guadalquivir Valley “, says De Juan.

That is why the scientists assure that it was a “ship of the line”, which went from Ostia to Cádiz during the summer sailing season. “Since the middle of the 1st century, Hispania has become the main exporter of olive oil to Rome. The oil is a pillar of the Roman diet, both as a condiment and for frying. The oil also served to light the streets and houses” explains the underwater archaeologist. In fact, Monte Testaccio, in Rome, is an artificial hill formed of amphora rubble from the Guadalquivir Valley that, according to Carlos de Juan, indicates that the mercantile traffic was voluminous.

Manel Fumás is also an underwater archaeologist, a doctoral student in maritime history and archeology, director of research in the caves of the east of Mallorca. The best known is that of the Font de Ses Aiguades: “The caves were used as a water point, as places of fresh water supply on the trade routes from the Iberian Peninsula to the Italian Peninsula. Some amphorae fell and sank inside the cavern, and that is why we have found authentic time capsules. ”

Fumás says that the worst of the profession is the precariousness and lack of budget: “The seas are full of stories, but the authorities insist on looking the other way because their museums are already full. In Spain this type of archeology is more a passion than a job “. He himself currently combines his underwater research work with driving an emergency ambulance.

Fumás is a member of SONARS (National Underwater Archeology Society), from which they try – even through crowdfunding – to carry out projects. They are pending approval for the investigation of a Roman wreck in Tarragona, of another wreck in Valencia whose chronology is unknown, and in Tenerife and Galicia two other modern ships from the end of the 18th century and the beginning of the 19th century.

And projects such as PaleoSub study the maritime soil of the Cantabrian continental shelf, from Castro Urdiales to Ribadesella. Within his multidisciplinary team, together with the technology of the oceanographic vessel Ramón Margalef – the twin of Ángeles Alvariño – is the underwater archaeologist Pablo Sainz Silió: “We are looking for human occupations in the Paleolithic. We know that while the Altamira Caves were being painted, the The water was at a depth of minus 40 meters. So we suppose that the best caves and the widest area of ​​human settlement in the Neolithic and Mesolithic we have it under water “.

Sainz Silió assures that working underwater is hostile and entails a difficult pressure, as well as limited residence times: “We have to make calculations with the time and depth, the water temperature and the means that we have when diving. It is not The same goes with your air bottle (autonomously) or with a surface supply (such as an umbilical cord that gives you air from the boat). We cannot go down alone, we have to rely on surface equipment, and even we have some safety divers in case something happens to the scientific diver at the bottom. “

“Another important problem is that dining rooms in half of Europe are decorated with amphoras and archaeological remains, which instead of being in places for research, and for dissemination to the general public, are restricted to the enjoyment of an individual”, assures Fumás . Something that both Carlos de Juan and Pablo Sainz Silió ratify.

“Our roots come from the sea, our cultural identity is under the sea”, concludes the archaeologist Javier Noriega, from Nerea Arqueología, a group linked to the University of Malaga. “For example, in the Modern Era, all the development and advances in technology were linked to the most complex machines, which were ships. And that naval architecture of the towns is yet to be discovered. The sea is an open book waiting to be read: society, culture and economy of the past within our reach “.