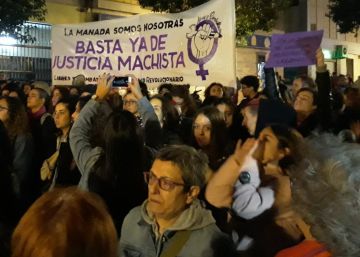 The sentence of the so-called Manada de Pamplona unleashed social anger. For tens of thousands of citizens it was incomprehensible that the group rape of a defenseless young woman was described as abuse. The recent verdict of known as herd from Manresa It has provoked protests, of less intensity but equally angry. Both resolutions have the same problem: the laws and some judges underestimate the seriousness of the sexual assaults that women suffer.

The open debate after the Pamplona case facilitates an adequate solution: change the Criminal Code. This rule allows judges today, although some impose severe sentences, to classify as a mere abuse a violation in which the victim, as in the case of Manresa, is not intimidated because he is unconscious and, therefore, at the mercy of the baseness. Disgusting of a group of men. The Popular Party, then in the Government, announced its intention to modify the law. The left supports it. But there the law follows in the same rejectable terms.

This situation demonstrates the difficulties that women still face so that their claims and rights are addressed. In the letter of the law and in some sentences underlies that inveterate social culture that tends to underestimate the aggressions suffered by them. Has there really been no time so far to change the Criminal Code, an issue in which there is consensus?

The Law of Equality and the Law of Gender Violence constitute important knockers in favor of women, but disturbing clouds appear on the horizon. Dystopia not only feeds fiction. The Spanish extreme right seems to care little about female suffering because it diverts the issue in her xenophobic discourse towards the nationality of the aggressors. The victims worry little about the illegal immigrants that we can expel and are responsible for 70% of the attacks – one of their gross lies. The problem of gender-based violence does not lie in the brutality that kills, abducts, injures and tortures hundreds and hundreds of women, but in the evil of those who file false allegations against their partners and a law that facilitates them the abuse. There is a battle to fight in Spain, said Vox leader Santiago Abascal in October 2018: against feminism. In a row, his party stormed the Andalusian parliament and, five months later, the state party. It is impressive to see to what extent their sophlamas enter society like the knife in butter.

Fortunately, the Supreme Court is correcting sexual abuse sentences that were violations, but the laws are elaborated and dictated by politicians. And it does not seem that underestimating the problems of half the population takes their toll at the polls.

La Bonoloto leaves a pinch in the Canary Islands