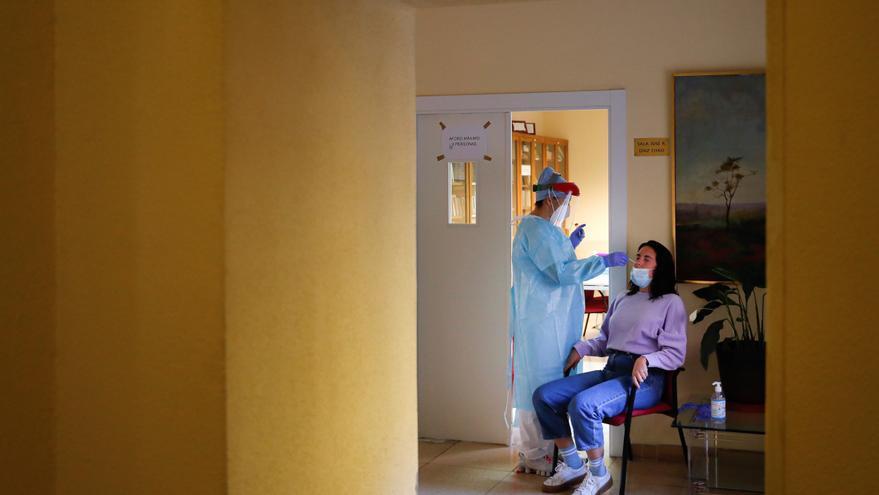 In the last call from the Galician health care that Raquel received, she had to clarify to the professional on the other side of the phone that the data she had was wrong and that the PCR that they believed was the first for her daughter was, in fact, the second . This telephone exchange occurred on Monday, November 9, nine days after this family learned of a positive case in their environment that triggered more than a week of dozens of repeated calls in some cases and contradictory in others.

The story starts on Sunday, November 1, when the school where Raquel’s youngest son studies warned her that a classmate had tested positive for coronavirus and the little boy was considered close contact, so he had to isolate himself. With him the rest of the family members were confined: Raquel, her husband and their other two daughters. They waited for the call from the Galician health services, but since it did not arrive, on Monday night Raquel took the initiative. On the phone set up by the Xunta to answer questions about COVID-19 they tell her that her partner can go to work the next day and the minors should attend class, something they do not do.

“The first call was Tuesday, from an Army tracker. Three different people called three times on the same day, all from the Army, to ask me the same questions about the child, ”says the mother. When it was pointed out to him, the last of these professionals was surprised.

On the same day, the preventive medicine service of the Lucus Augusti University Hospital (HULA) in Lugo contacted her to set an appointment for her son’s PCR the following day. On Wednesday itself “the trackers called again to ask the same and if there were symptoms ”, continues Raquel.

Raquel reached out to a friend who works in the health field and learned on Thursday that the child had tested positive. She had noticed tiredness and sore throat earlier in the week, so she had an appointment to speak with her GP that same day. Given the symptoms, the doctor requested a PCR for Raquel and another for her husband, but those of the two girls depended on their pediatrician. “I called her and she told me that I couldn’t ask for them, that if it was an outbreak at school, I had to call the COVID center. But at that moment they called me from the health center and gave the four of us an appointment, “he explains.

The tests were on Thursday in the late afternoon. Upon returning home, Raquel received another call, this time from HULA, to officially confirm that her son had been infected and to inquire about his close contacts. This person, Raquel says, knew about the outbreak at school and asked questions about extracurricular activities that the rest of the trackers had not asked so far.

Five children in the youngest’s class tested positive. Two of them were not considered close initial contacts, but PCR performed by alternative routes revealed contagion. The school had to quarantine the entire class as early as Monday.

Friday and Saturday: only half of the results

On Friday Raquel received another call from the trackers team. They told her that there was a chance to perform a new PCR test in 10 days and that, if the result was negative, they could resume their normal activity. If they did not do that second test, after 14 days their isolation would end. Raquel is struck by the fact that Galician health does not verify with a negative test that can discharge patients: “It gives me the feeling that they are going to sneak in there.”

The same friendship that gave him the positive of his son consults in the system the results of the family: all four have tested negative and the only one infected is still the youngest. On Saturday, the Servizo Galego de Saúde (Sergas) communicates through sms only the results of Raquel and one of her daughters. That same day, a tracker calls the family home and asks only about the mother as the child’s close contact.

Sunday: the PCR of the rest of the family does not appear

On Sunday, HULA staff contacted Raquel to set her up for her second PCR. She asks about the rest of the cohabitants, but the person on the other end of the phone explains that she is calling following the list provided by the trackers, which does not group people who live under the same roof. Nor is it relevant in this case, since the names of Rachel’s husband and daughters do not appear. “In this way they multiply the calls. Different people call us, if they call us, ”she protests and points out that her family doctor knows the family and also cares for her husband, which, she believes, would have simplified the follow-up.

He would still have another call to take that day. A tracker asks for one of his daughters, since it is recorded as a close contact with his infected brother.

The child’s pediatrician, who is in charge of monitoring the child, called on Monday to see if he was okay. The mother took the opportunity to ask if her daughters, who are also cared for by this doctor, could undergo the second PCR at the same time. “He told me that they had been called – the Primary Care doctors – and they had insisted that they can’t order PCR to close contacts of a positive. He took the protocol and read it to me, ”says Raquel.

HULA contacted her again the same day. A health worker asked him to take one of his daughters, the only one who has received an SMS with the results of her PCR, to take another test, “the first”, according to the hospital where the previous test was done. She responds that they were in the same facility for the same purpose four days earlier. “Here we do not know,” he replies. The professional he talks to also finds no trace of the names of his other daughter and her husband. “Well, we’ll call you back,” he says goodbye.