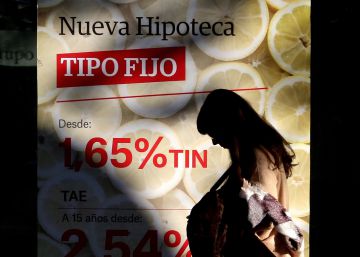 Interest rates continue to fall due to the slope of the negative terrain this summer. The slide of the abnormality does not seem to end now that the European Central Bank (ECB) He also plans to bring his official rates below zero. This Monday it was confirmed that the twelve-month Euribor -To which the interests of variable loans for housing are usually linked- stood at -0.190% in June, from -0.134% in May. Not that it will increase the possibility of spending this holiday for the mortgaged. It will give them, at most, for a couple of coffees. The guys fall, when a few months ago we thought they started the comeback. It coincides with the latest data on financing companies and families published by the Bank of Spain and that stress that for mortgages it lends less and to consume, much more.

Is the little credit a cost problem? These days a debate has been generated on whether the approval of the mortgage law has led to a rise in the cost of these loans. The Bank of Spain so has suggested. The Ministry of Economy he has put in doubt. These are perhaps reconcilable visions. First, I think it's too early to definitively link the approval of the new rule with the six-month rise in the cost of mortgages. Now the game of competition can play its role once that information is known. In any case, banks, like any other company, adjust (with pure logic of assumed expense) the costs of contracting in a market that barely lets them generate margin. Nor can we forget the growing weight of fixed-rate mortgages that may be explaining part of the rise. In any case, I think that a more deliberate analysis is needed to draw more solid conclusions.

The INE indicated last week that in April (last available data) the number of mortgaged properties decreased. The average rate of mortgages was also reduced (up to 2.59%). Those who really buy housing in Spain are not individuals, but institutional groups. Access to housing property for mortals remains complicated. Worries. In this environment of low rates, little is saved, wages hardly rise andHousing is an increasingly unaffordable asset. The ECB wants more credit. But it also asks, because it is not infallible on its own, that there are fiscal expansions that allow for more economic growth, higher wages and less dependence on expansive monetary policies. The downward rates generate that a large part of the debt is refinanced or renegotiated, but vulnerability remains high when the road to the rise in the price of credit begins. Delaying it for a long time is not a good solution for three reasons. One, those who lend (the banks) are suffocating with this artificial situation. Two, a dependency of the ECB is being created that places it before the citizens as the future responsible for the cost of its credits. And three, the rise has to come (even in a few years) and will plunder many homes and businesses with the foot changing.