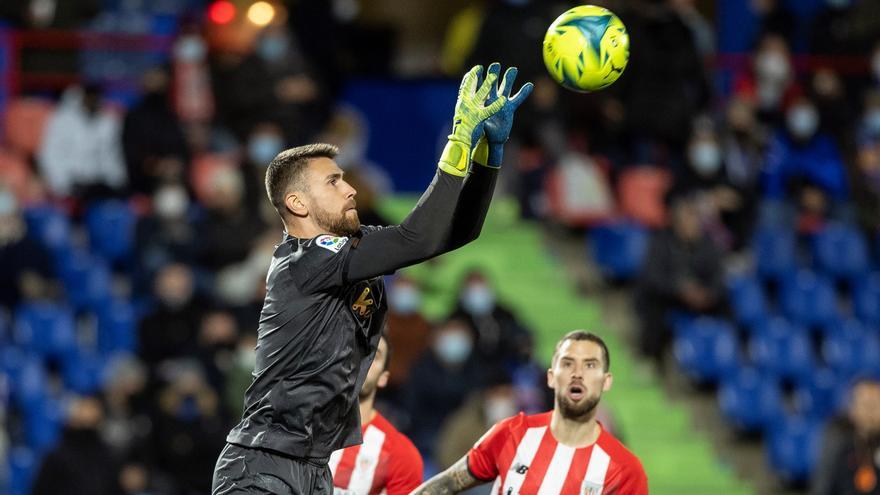 The interventions of Unai Simon, up to three keys, saved Athletic in a tedious match, that drew 0-0 against Getafe to add a point that rescued his goalkeeper before the need of the Madrid team to approach the rescue posts.

The goalkeeper of the Basque team emerged as the silent hero of his team. Without making much noise, in the second half he rescued Athletic, who signed a gray match solved by Unai Simón, who in the end saved a heads-up against Sandro Ramirez and a shot almost on line dand Mathías Olivera. His was the fault of the tie that reigned on the scoreboard.

In need of points, Getafe and Athletic They closed the day with the urgency of adding three at a time. For different reasons. Those of the Madrid team, evident: if they won, they were placed at a single point of salvation. On the other side, Marcelino García Toral’s team needed to savor the victory again outside of San Mamés more than three months later to, incidentally, get a little closer to Europe.

That script produced a thick show. Maybe because of the fear of losing, neither team shook off the pressure and signed a duel that will not be remembered for anything. Especially in the first half, in which clear chances were conspicuous by their absence and midfielder dominated almost every phase of the game.

Neither did the system of Getafe, which, although it has worked for him since Quique Sánchez Flores took office, does not help in the development of the game. For the third consecutive day he repeated the same eleven, with three defenders (Stefan Mitrovic, Djené Dakonam and Jorge Cuenca) and two long wingers (Damián Suárez and Mathías Olivera) with whom his rivals suffer.

With that spider web, during the opening act only Nico Williams, holder for the inconvenience of Iker Muniain, gave a sense of danger. The little Williams has self-confidence, speed, dangerous changes of pace and a lot of verticality. And that, on occasions, Djené and Damián suffered.

The GetafeMeanwhile, he found oxygen with Mauro Arambarri, who from time to time found inspiration to make good groundbreaking game changes. With the Uruguayan more or less in shape and with defensive solidity, Quique’s team endured the first half well, in which only Iñigo Martínez with a free kick and Dani García from afarThey had chances for Athletic.

On the other side, Carles Aleñá, also with a long shot, and Jorge Cuenca, with a header from a corner, created some uncertainty in the goal defended by Unai Simón. And that was it for each side, excessively little while waiting for the second half, in which a reactivation was necessary to awaken a match that seemed destined for boredom.

The clash continued along the same lines, but this time the approaches were more dangerous. At least in Getafe, because Athletic never again disturbed David Soria’s goal. The azulón box had up to four occasions that he forgave, especially the last one.

First, Aleñá tried with a Vaseline from the edge of the area that Unai Simón saved with a good hand; later, Sandro did not hit with a launch that did not catch enough thread to surprise the Athletic goalkeeper; then fifteen minutes from the end, Sandro He failed a very clear heads up against Unai Simón; The last one was enjoyed by Olivera, who, point-blank, met the Athletic goalkeeper again.

He was only in charge of rescuing a point for Athletic. His teammates were barely able to cross the Getafe wall, which, for its part, did not take advantage of the few opportunities it enjoyed throughout the game to place only one point from salvation.

Referee: Figueroa Vázquez (Andalusian Committee). He showed yellow cardboard to Djené (m. 15) by Getafe and Morcillo (m. 94) by Getafe. He expelled Quique Sánchez Flores (Getafe) at the end of the match.

Incidents: match corresponding to the sixteenth day of LaLiga Santander played at the Alfonso Pérez Coliseum before 9,176 spectators.