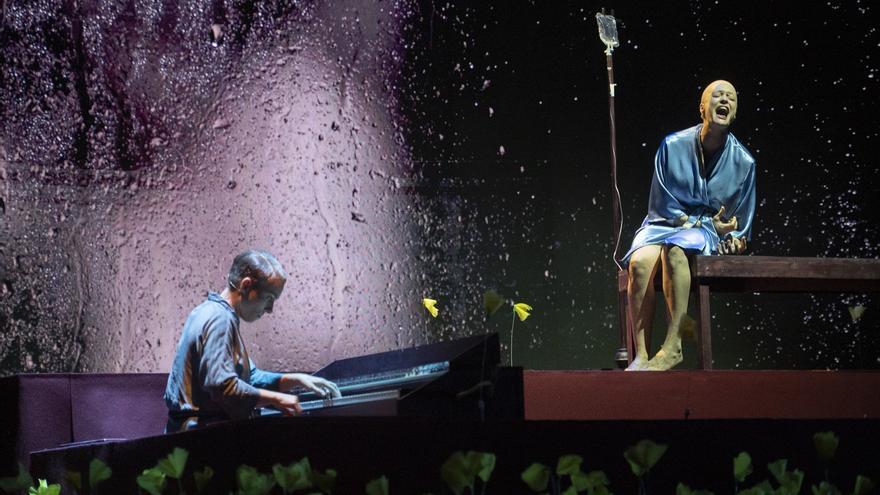 For Mario Vega, creator and director of Unahoramenos Producciones, the theatrical fact is the search and the possibilities of the form to represent the background, such as inventing a space to stop time and lift its masks. And on that void he builds real fictions that shake ideas and certainties with the only concession of beauty.

Her name, her imaginaries, her vision and theatrical stamp, chiseled by the hand of a team already consecrated in the island scene, she is a regular on the stage on both sides of the curtain, since the Replica Awards, which distinguish the best works annuals of the performing arts in the Canary Islands, summon them to their ranks year after year, in view of which it should be noted that the production rhythm of Unahoramenos honors its name, as if they gained time over time to put contemporary times and the strength of theater on time .

Last night it happened again, and twice, in the framework of a ceremony at the Guiniguada Theater, which brought together the highlights of the scenic map of the Archipelago. The twelfth edition of Réplica rewarded the courage to start a conversation in theater about death, redemption and the sting of guilt, and about cage-islands, walls, violence and shame in our south. Clara and the abyssfirst stage production of the Galdós International Laboratory, as well as the fourth play framed in this ambitious stage experimentation project at the Pérez Galdós Theater, won last night with three Replica awards for Best Theater Show, Best Direction for Vega and Best Female Performance for Marta Viera.

Both hoard awards such as stamps and the actress from Gran Canaria added last night's in the name of Clara, but also in that of Aminah, of Ana (who will not be forgotten) and of her infinite unfolding in the characters of The crime of Fuencarral street.

To this triad was added a fourth recognition for Unahoramenos for his work moria, Award for Best Scenic Space, because it couldn't be any other way: to recreate the suffocation, intimacy and fragility of the lives of two refugee women on the Greek island of Lesbos, Vega built this piece inside a tent, with 360º audiovisual projections. The replica of the Réplica to both plays, with a total of four awards, is deserving of new applause.

As for the rest of the distinctions, Paco España: from glory to oblivion, by Clapso Producciones, directed by Israel Reyes, which pays tribute to the figure of the great pioneer of transformism in Spain in the throes of Francoism, received two awards for Best Performance male for José Ignacio Galán, its protagonist, and Best Costume for José Vicente Martínez. In addition, Amelia in the city of illusions, also by Clapso, won the award for Best Family Show.

For its part, the award for Best Theatrical Authorship went to the writer and actor Abián de la Cruz for What the crickets sing, directed by Ruth Sánchez, from Ángulo Producciones (founded by Raúl Morán), which portrays the decline of a generation in the voices of María de Vigo, Toni Báez and Andrea Zoghbi.

The rest of the awards went to Jonathan Rodríguez, Best Sound Space for Tarasca, while the dance company Paloma Hurtado and Daniel Morales won the award for Best Dance Show for Ina, which added a second award for Best Lighting for Alfredo Díez Umpiérrez. And as announced in the run-up to the gala, the journalist and playwright Cirilo Leal, president of the Canarian Association of Writers, received the 2022 Replica of Honor Award in recognition of his career on stage and in culture.