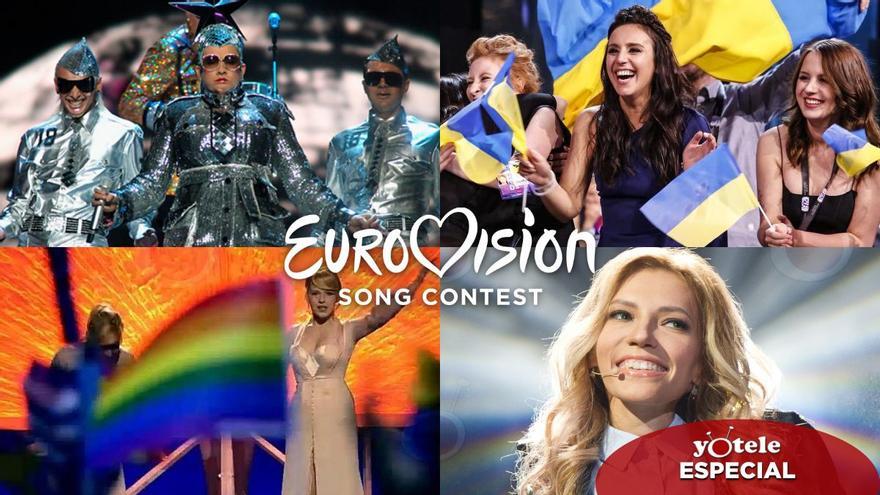 The invasion from Ukraine it has also had important consequences for Russia on a more social level. In addition to the cancellation of the 2021/2022 Champions League final in Saint Petersburg and the Formula 1 Grand Prix in Sochi, Russia will not be able to participate in the next edition of the Eurovision Song Contest, as agreed by the EBU during the past vertes.

Although the festival's rules define it as 'apolitical', this important decision comes after Russia and Ukraine have shown that their tense relationship within the framework of the festival, in which both have wanted to strain the politics between music, performances and the pyrotechnics of the stage of the contest. YOTELE reviews the history of politics and tension that Ukraine and Russia have experienced in the context of the Eurovision Song Contest.

The anthem of the Ukrainian orange revolution, the host song of Eurovision 2005

In the same year that it won its first festival, Ukraine was immersed in the orange revolution, a movement that took over the Maidan square and protested against presidential elections branded as fraudulent and whose one of the main faces was Ruslana, the winner with 'Wild Dance'.

To celebrate its festival in 2005, Ukraine chose Greenjolly as hosts and his song 'Razom nas bagato' (Together we are many), which had become one of the anthems of the protests that took place in the Ukrainian capital.

Verka Serduchka, the singer who seemed to sing a 'goodbye' to Russia

After the orange revolution that marked the country, in 2007, Ukraine achieved the second position in the Eurovision Song Contest with Verka Serduchka, a character played by actor Andriy Danilko, and her 'Dancing Lasha Tumbai'a song whose phonetics has a kind of subliminal message in which it seems that a 'Russia goodbye' is understood in English.

After Dima Bilan's victory in 2008, Moscow became the venue for Eurovision 2009, an edition that was marked by LGTBIphobia in public institutions. In fact, the mayor of the Russian capital at the time, Juri Lushkov warned LGTBI people that they could not demonstrate publicly: "The city does not allow gay parades"

It was not the only related thing that marked said election. According to Malena Ernman, mother of activist Greta Thunberg, Russian professional jury 'punished' her and Soraya for defending people's rights LGBTI during the development of the festival, placing it in the last positions.

'We don't wanna put in', the title of the song for which Georgia withdrew from Eurovision 2009

The edition that Russia held of Eurovision in 2009 was also marked by the geopolitical conflict in the separatist region of South Ossetia. Georgia had to withdraw from the festival after she wanted to change the lyrics of her song titled 'We don't want to put in', which made a word game with the Russian president.

In 2013, Putin approved the well-known anti-homosexual propaganda laws, worrying a large part of the international community, even within the organization of the Eurovision Song Contest. At that time, the Festival Reference Group with Jon Ola Sand at the helm (executive supervisor of the contest from 2010 to 2020) He even asked the participating Russian channels how they could affect a hypothetical celebration of the festival in their territoryeven signing an open letter condemning discrimination in all its classes.

Months later, at the 2014 Festival, the spectators of the contest booed considerably the Tomachevy twins, representatives of Russia, and at the moment that the spokeswoman of the eastern country gave her points. At the end of their performances, coincidentally or intentionally, the performance focused on several LGTBI flags waving while the protest of the public was noticeably heard.

The consequences of the Russian occupation of various territories of Ukraine also affected the celebration of the 60th anniversary of Eurovision. In 2015, the Ukrainian public broadcaster unexpectedly announced its withdrawal from the European festival due to the political and military situation in the country due to said conflict and the financial bankruptcy of the channel.

A year after its withdrawal, in 2016, Ukraine returns to the Eurovision Song Contest in style, although with some controversy. Within the framework of the conflict with Russia over the annexation of parts of its territory, the eastern country wins the european contest with Jamala and '1944'a song performed in Tatar and English in which he recalled the mass deportations that Tatars suffered during Stalinism.

"When the strangers come... they come to your house, they kill you all and they say: We are not guilty, not guilty. Where is your head? Humanity cries, you think you are gods, but everyone dies. They do not swallow my soul, our souls", states the lyrics of the 2016 Eurovision winning song, which has become topical again in 2022 after the Russian invasion.

Ukraine vetoes the Russian representative in the Eurovision held in Kiev

After Jamala's victory in Stockholm, Ukraine ventured to organize an edition of the Eurovision Song Contest in Kiev due to rumors of cancellation due to financing problems and its tension with Russia. In fact, the eastern country had to give up participating in the European contest after the Ukrainian authorities vetoed the entry of Yulia Samoylovahis manager, for performing at a concert in Crimea, annexed by Russia in 2014, without permission.

For its part, the EBU tried to save Russian participation in that edition of Eurovision by proposing that Samoylova act via satellite on a set in Moscow, a proposal that did not come to fruition.

If Eurovision has not gotten rid of politics, neither has the Junior contest. In 2018, the little artist Darina Krasnovetska represented Ukraine in the European contest with 'Say Love', a song in which she claimed with a megaphone the power of love and said 'no' to war in his lyrics. In a certain way, the composition dealt with a universal theme in the world of music, but the fact that the festival be held in Belarus, a satellite country of Putin's Russia, makes it take on special relevance.

Ukraine withdraws from Eurovision 2019 after controversy with Maruv

One of the most remembered Eurodramas starring Ukraine in recent years was also generated in part by geopolitics. Maruv was not the representative of Ukraine after he did not reach an agreement with the public television of the eastern country on the harsh contract that forced him to, for example, cancel their concerts in Russia, assign all the rights to their theme and/or not to speak to journalists without their express authorization.

In fact, many eurofans still remember that preselection because of the question that Jamala asked Maruv after his performance in the middle of one of the galas: "I have a very uncomfortable question for you: is Crimea Ukraine?".

Hours after this decision, and seeing that none of the finalists of their preselection wanted to fill the vacancy of Maruv, the Ukrainian public television (UA:PBC) he withdrew from the contest organized by the European Broadcasting Union, despite the fact that he had confirmed his participation. The decision came on the same day that the Ukrainian government announced the creation of a blacklist of artists who have performed in Russia.

The Maruv case is repeated: Alina Pash refuses to be the Ukrainian representative at Eurovision 2022

Ukraine recently revived the Maruv controversy over Crimea. Just four days after winning his national final, Alina Pash voluntarily gave up carrying the Ukrainian flag on the Turin stage 2022 after the Ukrainian public television itself revealed that the entry document to Crimea from Ukraine that his team submitted in order to participate in the Vidbir was not official, since it was not issued by the State Border Serviceas established by Ukrainian law.

"I am an artist, not a politician. I don't have an army of PRs, managers, lawyers to counteract all this attack, pressure, threats, hacking my social networks... And also the absolutely unacceptable reaction that people allow themselves, without understanding the situation and forgetting the dignity of each citizen from Ukraine. I don't want this virtual war and hate. The main war now is the foreign one that came to my country in 2014. I no longer want to be part of this dirty story. With a lot of heart, I withdraw my candidacy as representative of Ukraine in Eurovision," the artist assured in the publication she made on her Instagram profile.

The last chapter of this chronology of geopolitical tension arrived this past Friday. The European Broadcasting Union took the decision to expel Russia from the Eurovision Song Contest for the invasion of the country in Ukraine, who had requested that his neighbor be expelled from the organization and from the musical contest itself. Following this request, other territories such as the Netherlands, Denmark, Sweden, Norway, Lithuania, Latvia and Estonia, among others, expressed their rejection of Russia's presence at the festival.

"This decision reflects our concern that, due to the unprecedented crisis in Ukraine, the inclusion of a Russian candidacy in this year's contest could damage the reputation of the contest," the EBU explained in a statement, rectifying after hours, since at first he rejected the possibility of Russia being excluded from the contest, despite its attacks in Ukraine, because it was "a cultural event of a non-political nature". However, the organization acknowledged that it would "closely monitor the situation."