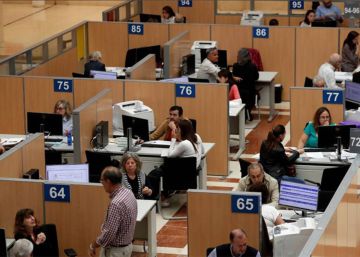 New Year, New Government. And also new agreements. The Federation of Public Services Employees (FeSP) of UGT has assured on Wednesday that it will negotiate with the Coalition Executive a new multi-year pact so that the salary of officials increases, at least, at the same rate as inflation during this term. He has advocated, however, for maintaining a salary increase formula for public workers similar to the one currently in force, which runs out this year, and that It is made up of a fixed part and another variable linked to the evolution of the economy, as the general secretary of Employees of the public services of the union, Julio Lacuerda, moved on Wednesday.

The Government has just approved the rise in salary of officials by 2% - which is waiting to become effective and that will have retroactive effect from January 1, 2020 -, as was agreed in the three-year agreement signed between the unions and the previous PP Executive in the 2018 Budgets. 2010 and 2018, the officials lost 14% of their purchasing power.

This agreement, a scheme that had never been used before, guaranteed a fixed salary increase of 1.75% in 2018 - compared to 1.2% inflation -, from 2.25% in 2019 —When prices rose by only 0.8% - and 2% by 2020. But the agreed formula did not end there. For 2019 it was negotiated that the remuneration increase five hundredths of variation for every tenth that the GDP advanced above 2%. And by 2020, a variable part is also foreseen: between 1% and 0.20% for meeting the GDP growth objective — as long as it exceeds 2.1%, an unlikely outlook according to most forecasts— , another eventual additional increase of 0.3% to be distributed as additional funds and 0.55% linked to the objective of meeting the public deficit, which would end up included in the 2021 Budgets.

The agreement has shown this Wednesday satisfied with this formula, which it proposes to maintain, since it has provided, according to the calculations of the union, a revaluation of the purchasing power of officials of 4% in these three years of validity. "Guaranteeing a multiannual agreement seems to us an interesting way to continue exploring," he said. "If after the experience we continue to guarantee the maintenance of purchasing power we have no problem because it can also be good if it contributes to the economic, financial, social and mood of Spanish society," he added.

The secretary of FeSP-UGT has stressed, however, that, in addition to the remuneration, there are other important issues pending on the table. Among them, the aging of the templates, high interinity - especially in Education and Health - or the lack of development of the Statute of Workers.

Therefore, the union will request a one-year extension of the open stabilization processes to try to approach the maximum temporary rate set for the public sector, of 8% compared to almost 28% today. Lacuerda himself has recognized that in several sectors it will be impossible to reach the goal, especially in Education or Health, where the situation is more bleeding and the places called are not far enough to meet the objective.

To move in this direction, Lacuerda has assured that the union will demand that they be suppressed the limits to the replacement rate of workers who retire. Between 2011 and 2019, successive adjustments in this regard have caused the destruction of 267,686 public jobs, the union estimates.