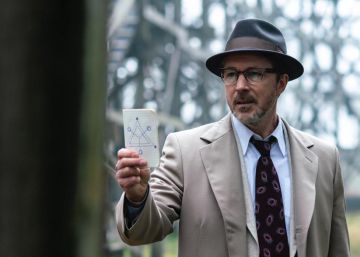 In the fifties of the last century, during the "cold war", the phenomenon of UFOs reached a social impact in the United States, that is, in the world, unsuspected. His Air Force created in 1952 the Blue Book Project in order to study the sightings of their pilots of extraordinary lights in the sky. Nearly seventy years later, Hollywood recreates those events in an excellent series of ten chapters (TNT) with the production of Robert Zemeckis, the director of Forrest Gump.

Complicated times in which the military exerted a great influence as a result of the victory in the Second World War and the citizens accepted to transit a territory close to collective paranoia. General Eisenhower presided over the country, domestic nuclear shelters began to be sold, televisions reported strange celestial phenomena and there was a clear enemy: the Russians. With these wickers the series was built.

At least three virtues must be highlighted: a very careful setting, a narrative rhythm according to the period in which the action takes place and an excellent interpretation by Aidan Gillen (Little finger in Game of Thrones), that from his condition of astronomer will try to rationalize the inexplicable. His initial skepticism will be gradually modified before his field work in phenomena such as the Texans Luces de Lubbock.

The key question is to know if there is life on other planets. The absurd thing is to believe that no. Some data: in our solar system there are 8 planets. In our galaxy there are 300,000 million solar systems. In the observable universe there are more than 2 billion galaxies. (NASA, ESA, and K. Sahu (2012). «The Milky Way Contains at Least 100 Billion Planets According to Survey»). We are nobody.