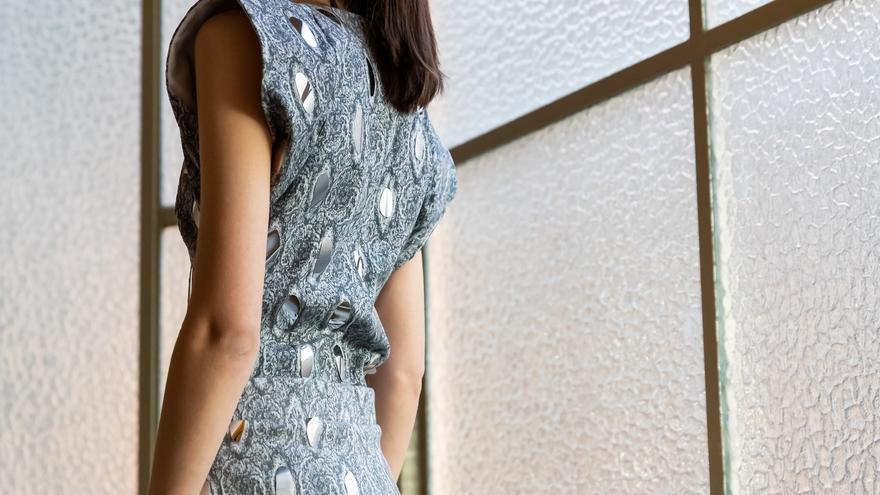 Barcelona, ​​Apr 27 (EFE) .- The Catalan designer Txell Miras was the first to walk on the second day of the 080 Fashion Barcelona catwalk with the almost exclusive presence of women in creative direction, among them the newcomers Paola Molet and Paloma Wool , which will close the afternoon of parades.

Miras has presented the collection “Zerkalo” (which means ‘mirror’ in Russian) with a “fashion film” as a “thriller”. An atmosphere of mystery with which he wanted to reflect “on self-centeredness in social networks and the need to expose ourselves so that people see us,” he explained.

The proposal has been full of contrasts: on the one hand, “looks” in a minimalist style, vaporous and simple, and, on the other, more sculptural and rigid proposals.

In the color palette, the klein blues and fuchsias stand out, as well as the silver details, including some masks, an unthinkable complement a year ago in a fashion collection, but which has now inspired brands like this one. Catalan who won the award for best collection at 080 Fashion in 2016.

Among all the designers, the proposals of Carles Gràcia, the guardian of Escorpion’s creative essences, will also parade, a firm that promises a festive proposal under the slogan “Let’s Dance” inspired by the nights of the legendary Studio 54.

In this 27th edition, 080 Fashion, 100% digital due to the pandemic, has replaced the traditional environment of the modernist Sant Pau site with Gaudí’s Casa Milà-La Pedrera, one of the emblematic places of the city.

The designers have been able to choose in which space in La Pedrera they displayed their designs, including the house of the time that is conserved on the fourth floor. Makeup and hairdressing spaces have been arranged in the auditorium.

The motto of this 080, “Undress your mind” (Undress your mind), once again affects the values ​​of the Barcelona catwalk such as innovation, creativity and sustainability.