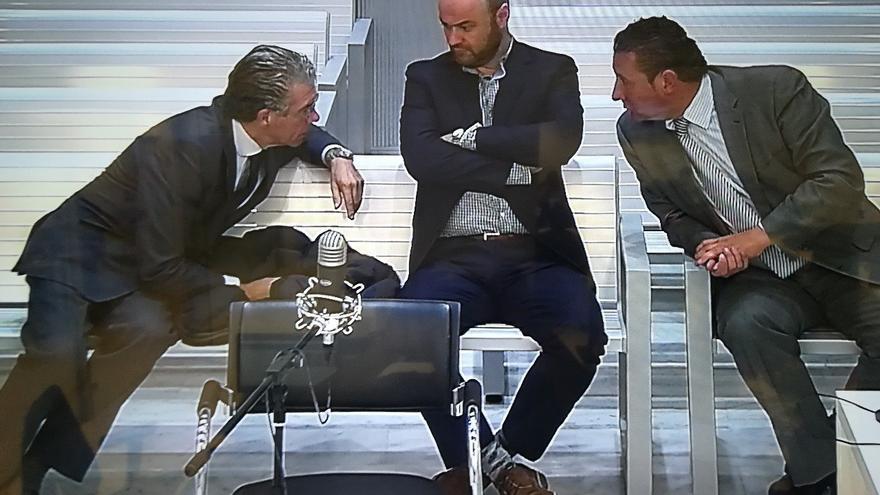 José Luis Caro Vinagre (Bilbao, 1970) wears the Civil Guard "embroidered in the heart". So he said Francisco Granados, the leader of the 'frogs' of Esperanza Aguirre, from the bench of the National Court in 2017. By then, this former adviser of the Community of Madrid was part of the bankrupt'spy case'and that day he was tried for participating in the tip-off that almost ruined the Punic operation against political corruption. His latest run-in with the courts has resulted in a firm two-year sanction for participating in the blow that almost got Francisco Granados and his associates dodging justice. A performance that, according to the armed institute, causes "blush and embarrassment."

Caro Vinagre's relationship with Francisco Granados began in 2007, when he took a leave of absence from the Civil Guard and was appointed technical security advisor in the Community of Madrid under the then-adviser to the almighty president Esperanza Aguirre. The two, according to Justice, were "closely united". Back then the Punic weft it was already in operation and David marjalizaHe allegedly collaborated with Granados by hiding his earnings in Switzerland.

The three crossed paths again in September 2014. A civil guard, José Manuel Rodríguez Talamino, approached Francisco Granados in the middle of the Valdemoro parties and told him that he himself had put cameras and microphones on the door of his partner's office Marjalize. The Central Operational Unit of the Civil Guard was on their heels and Granados, scared, wanted to know more. It was Caro Vinagre, a friend of Granados, who got more information from Talamino and transferred it directly to his former boss in the Community of Madrid.

The result is known and has been firmly sentenced. Granados and Marjaliza took advantage of the tip to try to erase evidence, the businessman burned a shopping cart full of compromised documentation on a foggy day and investigators had to get down to business to prevent months of investigations from going to waste. The defendants began to speak in code on the phone, the Civil Guard had to remove the recording devices, pretending that they needed to go to Alicante to pursue a drug dealer who did not exist and, in the end, they even considered speeding up the arrests to avoid greater evils.

The murmur resulted in a firm sentence of two years in prison for Granados and his informant Talamino, and another one and a half years in prison for José Luis Caro Vinagre, a sentence confirmed in 2019 by the Supreme Court. Shortly after, it was the general director of the Civil Guard, María Gámez, who signed a two-year suspension of employment that has just been ratified by the military chamber of the Supreme Court after passing through the Central Military Court and the Minister of Justice herself. Defense, Margarita Robles.

The magistrates of the Supreme Military Chamber, as elDiario.es has been able to verify, have just rejected the last appeal presented by Caro Vinagre and have declared the sanction firm, letting it fall that it could even have been suspended for a longer time. The Supreme Court confirms that, with his participation in the tip off, he caused "serious damage" to the Civil Guard, incurred in "a disgrace incompatible with his status as a member of the Civil Guard" and, adds that "one more than relevant affection to the Benemérita ".

Civil Guard sources explain to elDiario.es that neither of the two agents convicted in this sentence continue to practice within the body. Talamino, these sources explain, lost his status as a civil guard after being sentenced to two years in prison and four more years of disqualification from exercising a job or public office. Expensive Vinegar is also currently out of service.

The case file reveals the terms in which the Civil Guard imposed the sanction on this agent on leave of absence. The resolution that he tried to fight unsuccessfully in court accused him, according to the text, of developing "a criminal activity that causes embarrassment and embarrassment, as well as evident scandal before society." Corruption, says the resolution that sanctions it, is a matter with a "special existing social sensitivity towards this type of criminal conduct related to matters related to corruption."

The Central Military Court developed these criticisms, recalling in its now confirmed sentence: "It is required of the members of the Civil Guard, in view of the delicate mission entrusted to them and the quota of coercive power of the State that concerns them, a" plus "of morality and exemplary in their social performance." In addition, Caro Vinagre recalls: "During his leave of absence, and we reiterate without having been discharged from the Corps, he was a technical security advisor for a public administration, hired by the Community of Madrid, that is, he performed functions for the autonomic administration, with what his conduct is in greater measure reprehensible ".

The tip did not sit well either in the Civil Guard or in the Anticorruption Prosecutor's Office. During the trial, Agent Talamino's former boss made no effort to hide his disappointment at the convicted man's performance. Before the court, he lamented: "It was one of mine, it was a very difficult stain to erase, it has cost us a lot." A disappointment comparable to that expressed by one of the prosecutors in the case during the interrogation of Talamino during the investigation phase.

The representative of the Public Ministry was clear during the appearance of the agent. He addressed the defendant directly: "Are you aware of what passing information can mean, and the disappointment for people who have been working for so many hours?" Talamino lowered his voice and simply acknowledged that it was "a very low blow." That day Caro Vinagre revealed how her conversation with Granados was the day after the first chapter of the tip: "Mr. Granados calls me, and at my door he tells me that 'Tala' has told him that they have put up some cameras and some security measures".

At that time, Caro Vinagre had two open fronts with Justice. In addition to the cause of the tip, the civil guard on leave was pending trial by the one known as'spy case'and the accusation of using public media from the Community of Madrid to spy on Esperanza Aguirre's political rivals: Vice President Alfredo Prada and Vice Mayor Manuel Cobo.

The case was archived and reopened several times with José Luis Caro Vinagre accused of being part of a command of spies at the service of the Community of Madrid to monitor high-ranking officials and was exonerated of any criminal responsibility in 2019, while he was convicted of the murmur. of the Punic. A popular jury established that there was no reliable proof that this group of security advisers dedicated to espionage had existed and that was when José Luis Caro Vinagre went on the attack.

First, as explained by the agency Europa Press, demanded from the Provincial Court of Madrid that both the Community and the PSOE, accusations in the case, be ordered to pay the costs of the process after being acquitted. Then he charged Manuel Moix, at that time the Madrid Chief Prosecutor and later the Anticorruption Chief Prosecutor. He complained against him, accusing him of falsifying data on the case to favor the political interests of the PP, but the Supreme Court rejected the complaint. The failed legal action even accused Moix of belonging to a criminal organization.