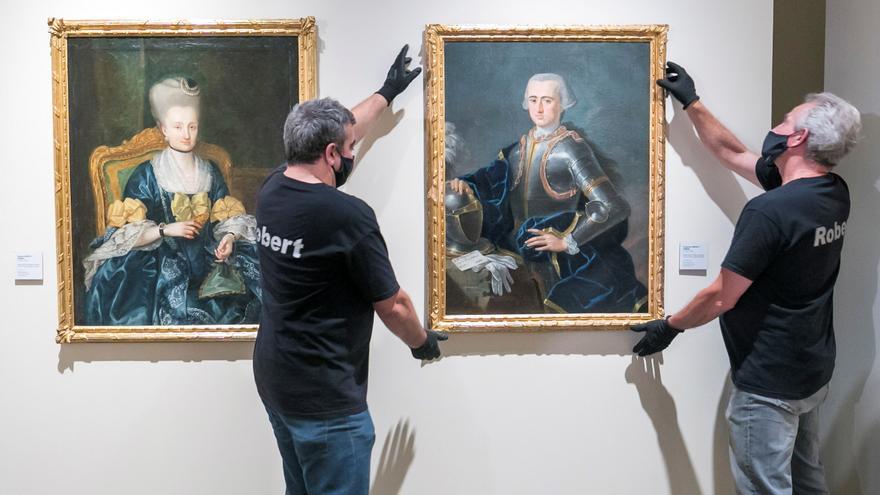 Zaragoza, Jul 21 (EFE) .- The Goya Museum in Zaragoza, belonging to the Ibercaja Foundation, incorporates two unpublished portraits attributed to the brothers Francisco and Ramón Bayeu, which have been loaned on deposit from a private collection.

These are the portraits of "Don Felipe de Palafox, count consort of Montijo", by Francisco Bayeu, and of his sister "Doña Rafaela de Palafox, Duchess of Híjar", by Ramón Bayeu, both leading exponents of the Aragonese aristocracy, and which will be exhibited in the space dedicated to the Bayeu in the Sala Goya.

In fact, these two paintings, made around 1770, come from the Híjar family, one of the eight great noble houses of the Kingdom of Aragón, until in 1930 they were inherited by the Dukes of Almazán and, since 2008, are part from a private collection.

The recovery of these paintings also coincides with the 275th anniversary of the birth of Francisco de Goya - of which the Bayeus were contemporaries - for which various events related to the legacy of the Fuendetodos painter are being promoted.

The person in charge of making the historical-artistic study of the paintings, Arturo Ansón, explained that he saw them for the first time in 2014 when their owner contacted him after having inherited them.

Despite the deterioration due to the passage of time, he has ensured that, upon observing the portrait of the Count of Montijo, he immediately saw Francisco Bayeu's invoice.

In the same way, when he saw the portrait of his sister Rafaela, he found that it did not have the quality of the previous one, so it is one of the first works of Ramón Bayeu.

In his opinion, it was logical that the Marquises of Ariza, parents of those portrayed, called Bayeu, one of the most important artists of the time, to paint some pictures that would decorate the walls of his Madrid residence.

In fact, a photograph from the 1920s shows that both portraits adorned the walls of the hall of the Duke of Híjar's palace, on the Paseo de la Castellana in Madrid, which now houses the residence of the Portuguese ambassador.

Felipe de Palafox (1739-1790) was the son of Joaquín de Palafox, Rebolledo and Mexía Centurión, 6th Marquis of Ariza and Guadalest, and of his second wife, María Ana Croy D'Havré and Lante della Rovere, princess of Croy and of the Holy Roman Empire.

As he was a "second son" and had no chance of inheriting the family's noble titles, he made a military career and ended up marrying María Francisca de Sales Portocarrero, 6th Countess of Montijo.

The portrait of Felipe de Palafox is a portrait of more than half the length, in a three-quarter position, with armor, a blue noble mantle and the right hand resting on a nobleman's war helmet.

Both in the model, as in the pose and in the execution of the painting, the influence of Anton Rafael Mengs, Carlos III's chamber painter, can be seen, in which Francisco Bayeu would replace him after his departure to Italy.

As for Rafaela de Palafox, she ended up marrying one of the great Aragonese, Pedro de Alcántara Silva, Fernández de Híjar, Palafox, Centurión and Abarca de Bolea, IX Duke of Híjar, one of the eight great noble houses of the old Kingdom of Aragon .

For this portrait, Ramón Bayeu took as a model and prototype the one that Mengs painted of the Infanta María Josefa de Borbón, since they are practically the same positions and, simply, the clothing is updated a bit to adapt it to the fashion of 1770.

The Duchess of Híjar appears seated in a rococo Louis XV style armchair, with an elegant blue satin dress, with a lace fichu at the neck and large mustard-colored bows under the chest and on the forearms.

This discovery shows that the little Bayeu, when he had free time to paint frescoes or other commissioned works, could also do portraits, Ansón has assured.

These two additions reinforce the museum's exhibition discourse, together with the recently inaugurated exhibition "The stela of Corrado Giaquinto in Spain: from González Velázquez and Bayeu to Goya".