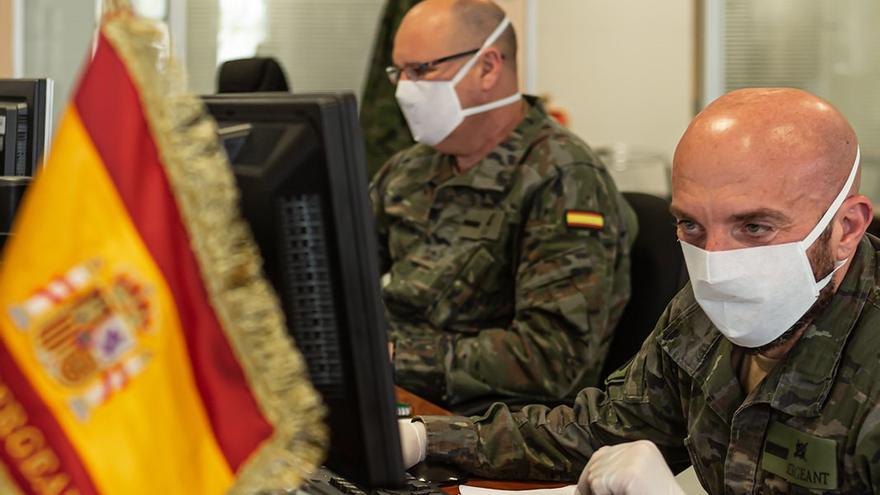 Last Tuesday, the President of the Government Pedro Sánchez announced a package of measures which, among other issues, gave more weight to the autonomous communities in their particular management of the coronavirus health crisis. The debate about the count of cases and the difficulties of finding professionals specialized in the follow-up and location of asymptomatic patients had been a barrier for many regions that, such as Madrid or Catalonia, had been entrusted to the private sector. In response, Sánchez announced his intention to mobilize 2,000 soldiers to act as support trackers. “Communities that do not have enough trackers can count on the help of the Armed Forces,” said the president at the press conference.

The Government will respond “immediately” to the demand for Army trackers formulated by the autonomous communities for “as long as necessary” and with a number of troops to be jointly defined by the Defense and Health ministries. This was explained by the Minister of Defense, Margarita Robles, and the Undersecretary of Defense, Amparo Valcarce during a meeting held this Thursday to clarify the avenues of action.

In the same sense, the Minister of Health, Salvador Illa, who hoped to be able to assign the first military trackers to the autonomous communities this Friday. Illa has stressed that 2,000 troops will offer a “high-level” service with “very effective” professionals who will work as autonomous units in the communities that have requested them. They will do so for a “limited and priced” time.

The procedure for the incorporation of these military trackers establishes that the autonomies must submit an explanatory request to the Ministry of Health about the epidemiological situation that motivates this need for reinforcement. From there, Health and Defense will evaluate this request with an “immediate” response, yielding the military trackers and the number will be appropriate to the situation in the territory.

The measure has found a mixed reception and has shown the differences of opinion between the communities, as well as the weaknesses in the tracking of each one of them.

Who have said yes?

Murcia, Galicia, Cantabria, Navarra and the Valencian Community have started the procedures to incorporate members of this unit to their teams of regional trackers.

The Murcian region was the first to request military aid and asked 60 trackers to the government to control coronavirus outbreaks. The Minister of Health, Manuel Villegas, justified the figure on the grounds that “it is what would correspond to the Region by population in the whole of Spain.”

The Valencian Community has been next on the list. Ximo Puig has sued this Thursday 150 trackers to control outbreaks in the capital and its metropolitan area. The trackers will create a “direct action group in places where an outbreak occurs. The army has a working methodology that may be appropriate,” added Ximo Puig.

Cantabria, Galicia and Navarra, for their part, have not ruled out asking the Government for tracking teams but are demanding more information on the procedure. The Department of Health of the Xunta was interested in the offer of the central government as confirmed to elDiario.es sources from the department headed by Jesús Vázquez Almuiña, but demands that the collaboration be “made concrete”. This claim comes after having increased the numbers of trackers in the community, which passed from having 20 to 6,000 in a month and a half.

The Cantabrian Health Minister, Miguel Rodríguez, pointed out that the community has made “an immense effort” to hire trackers but “does not rule out having to resort to that measure“, a statement that resembles that made by the Navarre Executive. The first vice president of the Government of Navarra, Javier Remírez, has affirmed that the provincial government does not contemplate” as of today “requesting the declaration of the state of alarm, but not closes the door to trackers, “as we do not rule out using all the means at our disposal.”

In a critical tone, the Community of Madrid has “welcomed” the trackers, although it has not yet made an official statement. Community, who had 180 trackers in July, tried to recruit volunteers to alleviate the tracking gaps, and has not yet ruled on the offer of the central government. The Minister of Justice, Interior and Victims of the Community of Madrid, Enrique López, has assured that “any measure to fight the coronavirus” is positive but the decision corresponds to the Minister of Health, Enrique Ruiz Escudero.

Who has not spoken?

There are still no known assessments of this measure in Andalusia, the Canary Islands, La Rioja, Castilla y León, Aragón and Extremadura, as well as the autonomous cities of Ceuta and Melilla, which are awaiting certain government clarifications on the possibility of declaring states local alarm.

This measure, on the other hand, has provoked the pronouncement of some of these communities that have revealed their primary needs. This is the case of the head of the Extremaduran executive, Guillermo Fernández Vara, who has assured that “In Extremadura there are no circumstances to request the Government to declare a state of alarm”, a line shared by the vice president of the Junta de Andalucía, Juan Marín, who has assured that “at this moment”, no need for an “alarm state”.

The rest of the communities have declared that they do not need military support in their tracking teams. Or at least not yet.

The spokesperson for the Government of Catalonia, Meritxell Budó, has ruled out that the Generalitat is going to request the help of military trackers to combat the outbreaks of COVID-19, as stated in an interview in RNE. “I am aware that Public Health is working with a tracking program and the equipment has been greatly increased,” said Budó before recalling that the 2,000 soldiers “are not a very high number, taking into account the number of autonomous communities. “.

Castilla-La Mancha, for its part, has also justified the refusal by taking advantage of the numbers of trackers, more than 400 according to data from the government of the region. This number will increase in September with the incorporation a specific epidemiological surveillance nursing unit.

The Government of the Balearic Islands issued a statement after Sánchez’s appearance, arguing that the community has “the necessary tools to apply the measures that are being decided through the different resolutions signed by the Ministry of Health” and refusing to use the new instruments at its disposal, something that has also insured, for the moment, from the Asturian and Basque executive.