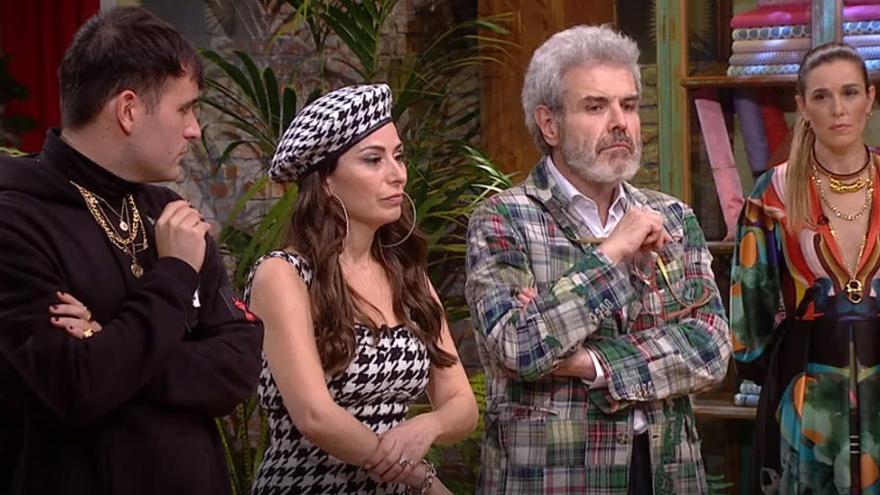 “The competition in this workshop is huge“, he began by saying Alejandro Palomo at the beginning of the fourth program of ‘Masters of Sewing‘, from La1, in which the jury has set the bar very high, so much so that in the first test she was expelled Nani and at the end of the night he also said goodbye, unexpectedly, Ancor.

A night of surprises when leaving the program two of the favorite and most praised trainees for its sewing, especially Ancor, which always stood out in all tests.

Nani’s garment did not reach the minimum quality marked by the judges, while Ancor turned out “noño” in his attempt to make trap garments.

In tears, Ancor did not await his expulsion, nor did his companions, who reflected their surprise on their faces and lamented their anguish.

“Anyone who is not capable of making a different, exportable garment that works outside our borders will be expelled in the first test,” he said. Lorenzo Caprile, which also asked the trainees that each design be supported by a story.

A test in which designers Alejandra Alonso and Arturo Obegero, two young people who have succeeded with their brands in New York and Paris, gave their best advice to the contestants.

Despite the tension and thanks to Laura, laughter has not been lacking andn the proof that Lluís confessed that he was incapable of reaching the expectations that the judges have of him, while he was throwing a poisoned dart at Ancor. “He has the gift of always being a favorite,” he said with a certain heartburn, without waiting for him to be expelled later.

Lluís has faced the judges at various points in the program. The first, for what he considered an undeserved fourth place in the initial test, which Javier has won with a Fallas-inspired bodice.

After the intensity of those first moments and the absence of Nani, Lagartera (Toledo) has been the destination of the contestants to carry out the outdoor test.

The town of Castilla-La Mancha has made its crafts known, a place where for more than 700 years, women have transformed cloth into authentic hand-embroidered works of art. Pieces that speak for themselves and that were once used daily.

“Authentic museum pieces, relics”, has qualified Caprile, while María Escote has praised the artisan work of the seamstresses that “it would be a shame if it were lost,” he said.

Lluís again faced Caprile, at the end of the team event, which, however, appreciated his work in Lagartera. “You have no patience,” the dressmaker yelled at him when he wouldn’t let him finish his speech. “My mother gave birth to me like this from the day I was born,” said the apprentice, who finally confessed with a laugh: “Caprile I idolize you.”

In an unexpected turn of the wheel, the apprentices destined to face the expulsion test, were spared, because Laura, the winner of the previous test, chose to save herself and that meant that the rest of the winning team in Lagartera, formed by Ancor, Yelimar and Javier, they had to fight for expulsion.

The test consisted of doing various pieces inspired by trap culture, who was born in the 90s in the suburbs of Atlanta (United States).

A fashion that mix sportswear with haute couture elementswhich Javier has defined as “chonismo de luxe”, in a test in which they have had the singer as inspiration Bad gyal and the designer Estel perez, founder of Astel Batlle who has collaborated with Rosalía and La Zowi.

“You have to lose your fear”, Bad Gyal has warned the contestants, a fear that was breathed in the environment to avoid being expelled, which Ancor finally could not overcome.

Doubts about the immunization strategy and the rejection of “vaccinometers”, in Out of Plan

Chicote’s wife explains how television has changed them: “Now he doesn’t do things he did before.”