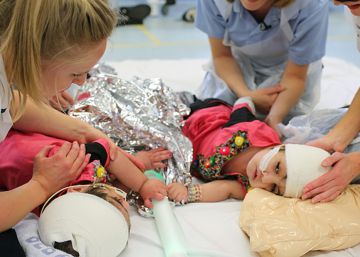 A team of 100 surgeons, anesthetists, nurses, bioengineers and other experts planned and carried out a complicated operation to separate the two Siamese, Safa and Marwa Ullah, from Pakistan, who were born together by the head. The small ones stayed 50 hours at the operating room table, through a series of phases. The first took place at the end of October. The girls were then 19 months old. The final operation, which finally managed to separate them, took place on February 11, London hospital on Great Ormond Street. "With the help of God, I am able to hold each of my daughters in my arms for an hour, and God has answered my prayers," said Zainab Bibi, the 34-year-old mother.

The small ones were united through their skulls and their capillaries, one of the most complicated slopes to treat in these cases of Siamese, which barely occur in 10 births of between a million. Zainab had previously been the mother of seven children. With all of them, the birth was in his own home. When he knew he was going to have twins, he set out to do the same. But ultrasounds warned of possible complications and doctors suggested that she have the girls in a hospital. Zainab was alone. Her husband had died two months before a heart attack. The pediatric team warned that the twins could be born together, but nobody imagined the complexity of the problem. They were born on January 7, 2017, by cesarean section, at the Hayatabad Hospital in Peshawar (Pakistan).

The doctors waited a few days before explaining the situation to Zainab, and the first image of her daughters she saw was a photograph. Soon fell in love with them, told the British BBC. "They were beautiful, with wonderful hair and shiny white skin, I did not even think about the fact that they were united, they were a gift from God," the mother told the BBC, which had direct access to the details of the operation.

Their names, Safa and Marwa, are those of the twin hills in Mecca (Saudi Arabia), which occupy a central role in the Islamic rite of pilgrimage.

The family immediately decided to proceed with the separation of the small ones, insofar as possible, but the first military hospital to which they came and offered to carry out the operation, warned them that one of the two would necessarily die. . By coincidence, he was in the Owase Jeelani region, a pediatric neurosurgeon who works at one of the most prestigious children's hospitals in the world, the Great Ormond Street, in London. After seeing the scanners of the girls, he was convinced that they could be separated, but it had to be done, he suggested, before they turned the first year.

The technicians and experts who turned to the operation (Great Ormond Street had already made, with success, two similar interventions in previous years) used virtual reality to recreate the exact anatomy of the small ones, together with plastic models made with 3D printing for be able to rehearse the operation. In the first intervention, the brains had to be separated from the small ones. In the second, the capillaries. In the third, control the blood flow of each of the small. It was in the last intervention when the problems arose. Marwa's heart rate began to fall and it was feared that she might die at the same operating table. Safa suffered a cardiac arrest. Dr. Jeelani, tells the BBC, was clear that Marwa was the weakest of the twins. He decided to derive one of the shared veins that was vital. They would thus increase their chances of survival, but he was also aware that the impact would be hard on Safa's condition. 20 hours later, the team breathed a sigh of relief.

In the final intervention, David Dunaway, a specialist in reconstructive surgery, reconstructed the skulls of the small ones using his own bone material. They finished separating some capillaries and tissues of the brain and arranged skin fragments, previously widened, to cover their heads.

The entire operation was paid for by an anonymous donor. "It has been wonderful to meet the girls and the family, their faith and determination have been fundamental to enable them to face this challenge, and we are really proud of them," said Dr. Jeelani.