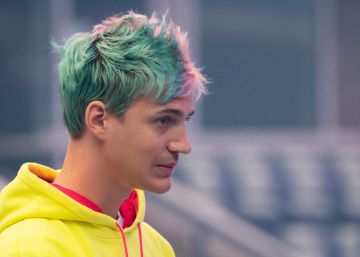 Richard Tyler Ninja Blevins is one of the best known video game players in the world. This American born in Grayslake (United States) 28 years ago began to be a professional video game player back in 2009 to become, shortly after, in streamer; that is to say, devote himself to broadcasting his games live while other people see him from their homes. Thus began his journey in what ended up being a profession. First the online chain Justin, then Twitch and, finally, the Mixer platform, from Microsoft, where he recently signed a millionaire contract to play there exclusively.

The interest that arouses Ninja It is superlative. His influence has become such that in the channel he had on Twitch he reached 14.7 million followers throughout his career. Nearly a fortnight of – mainly young people under the age of twenty – users decided to click on the button indicated to subscribe and not miss any of their broadcasts; a commitment to its content, such as when we did not miss our weekly appointment with that series to which we were hooked.

That traffic of simultaneous users, which in collaboration events with rappers like Drake came to have peaks of 300,000 e even 600,000 spectators concurrent in 2018, it translates into a very attractive advertising showcase for brands, which they can use to promote their products in different ways and methods on the platform where the broadcasts, the so-called streamings.

And all that generates money.

The fight to have the best streamers

Just as signing a media star in the world of football guarantees not only goals but the sale of thousands of shirts, something similar is beginning to happen in the universe of video game broadcasts with the incipient consolidation of platforms of the great multinationals of the Technology sector YouTube, bought by Google in an exercise in advance for what was to come there by 2008 after payment of 1,650 million dollars; Twitch, owned by Amazon; and Mixer, created by Microsoft, began their journey with certain differences in their objectives, but little by little they have embraced the possibility of broadcasting live as one of their hallmarks. Deferred a certain amount is billed, but live that amount increases considerably.

Work at the checkbook to buy, in a sense, public that consumes content on your platform. This is how the signing of Ninja.

The news was a trend in social networks and had media coverage throughout the day of August 1: Tyler Ninja Blevins signed for Mixer. Switch to direct competition, a blow of effect by the American firm gestated in silence, with virtually nothing leaked. The announcement was accompanied by a video where he streamer, as if it were an NBA star, he appeared with the means to explain his progress. "I am aware that what I am going to announce will leave many of you in shock," Blevins explained. "But it's me, the same as always, only on another platform."

From the offices of Twitch they witnessed not only the march of one of the thousands of young people who broadcast on their platform for hours every day; what they saw was the loss of a guarantee of daily viewers, from a community that added more than 14 million followers

From the offices of Twitch they witnessed not only the march of one of the thousands of young people who broadcast on their platform for hours every day; what they saw was the loss of a guarantee of daily spectators, from a community that added more than 14 million followers. At Microsoft, meanwhile, they celebrated the incorporation of a star (the most popular in fact) to their list of players to accelerate their growth, because to date they were well below the Amazon solution.

The most recent data indicate that Mixer had 119 million hours in visualizations last quarter (Streamlabs via Games Industry), 37% year-on-year growth. The figure is not so high compared to Twitch, which had 2,700 million hours seen last quarter.

The ninja effect There was no begging in Mixer, whose downloads and use of the application on mobile devices skyrocketed on debut days. What was the 700 or 800 application in downloads became number one. Randy Nelson, consulting member Tower sensor, said they estimated downloads above 26,000 users only on August 1 in the App Store and Google Play in the United States, a growth of 2400%. The previous week was downloaded a total of 4,000 times.

In his first broadcast a day later, Ninja had an average of between 75,000 and 80,000 spectators while playing Fortnite: Battle Royale; Twitch had about 130,000 viewers at that time. A migration of the faithful that has only just begun. The battle between Mixer and his old house began at that time, with movements that have gone around the world.

The reuse of the Ninja channel on Twitch, in question

Shortly before reaching one million subscribers in Mixer, Twitch had already begun to take advantage of the old channel of Ninja for promote others streamers; this way, when entering the main page their videos were no longer seen, but of the other most popular players. All without the consent of Blevins, which posted a video in his social networks completely disappointed to have made that decision without consulting him.

The problem came later, with the use made by some content creators of this new massive showcase: they began broadcasting pornographic content. Emmett Shear, CEO of Twitch, echoed the situation and apologized, ensuring in their message that they would stop promoting those channels that did not broadcast content from Fortnite and other similar video games. The limits had been exceeded, which raised the question of how far the dispute between these companies can go to have the most influential players in the picture.

To get an idea of ​​the economic production capacity of these young content creators, we can look at the report published by The Wall Street Journal this past May, where Reed Duchscher, CEO of Night Media, said that a streamer With between 15,000 and 25,000 spectators it can generate about $ 30,000 per hour of retransmission, especially if they are games that have just arrived on the market or popular works such as the phenomenon Fortnite. The difference between playing a million times a video on YouTube with 20,000 people watching a live game is huge.

The economic amount of the exclusivity contract of Ninja in Mixer it has not transcended, but there is talk of several million dollars. In fact, the young man came to bill $ 500,000 a month, according to the CNBC, thanks to the popularity of its contents and Fortnite last spring of 2018, when the battle royale phenomenon (One of the many video games where dozens of players fight for survival at the same time until there is only one left standing) began to make the qualifier itself small.