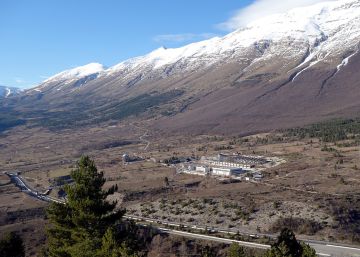 In the 1930s, Swiss astronomer Fritz Zwicky observed that some groups of stars moved faster than they should. The visible mass did not justify its speed and the scientist stated that there should be a dark matter that explained his movement. Since then, the concept has become a fundamental idea to explain the cosmos, even as part of a gigantic mystery. Visible matter, such as that made up by planets or stars, only accounts for 5% of the universe. Dark matter, of which we only see its indirect effects, is 25%. The rest, the even more mysterious dark energy.

There are projects all over the world that try to produce or detect dark matter, but so far no one has succeeded. Or nobody has had a success recognized by the scientific community. For over twenty years, a team led by the professor at the University of Rome Rita Bernabei says she has trapped dark matter. His supposed achievement was obtained thanks to DAMA, a detector of 100 kilos of sodium iodide installed in a laboratory buried more than a kilometer deep, inside the Gran Sasso, in the Italian Apennines. That detector was a sophisticated trap to capture some of the WIMPs (massive particles of weak interaction that, in theory, make up the dark matter), which would emit a bright flash when they hit some of the detector's atoms.

In 2021, the COSINE and ANAIS experiments will have accumulated enough data to have reliable results

The idea to observe such an elusive type of matter was proposed in 1986 by the University of Texas (USA) researcher Katherine Freese, who suggested that differences in the amount of dark matter that our planet crosses at different times of the year could be observed . We orbit around the Sun which in turn orbits within our galaxy accompanying the invisible halo of dark matter. As if it were a mosquito cloud that advances, when we follow the same direction at the same speed, the number of impacts against our vehicle would be less, but when we reached the point of our orbit where we changed direction, we began to move against the cloud, you would see an increase in the number of impacts. That peak of impacts is what the Gran Sasso team has observed around June since 1997. And the same observations have been confirmed by the same team and in the same place with an improved detector of 250 kilos of sodium iodide.

The problem for Bernabei and his people is that it is not so easy to build a detector with the characteristics and sensitivity necessary for the results to be comparable. The collision of a particle of dark matter against one of normal matter is something so strange that it is not easy to isolate it from any other phenomenon and so far, efforts to replicate the experiment have failed to offer a conclusive answer.

Experiments such as CDMSII, installed at the Soudan mine in Minnesota (USA), or Xenon 10, in the same Gran Sasso laboratory, failed to find the dark matter signal in the same energy range as DAMA / LIBRA. Another one like CRESST, also in the Italian underground laboratory, got a signal, but it was too weak and didn't seem to match exactly that of Bernabei's team. In 2017, an improved version of Xenon 10, Xenon 100, found no sign of dark matter searching where DAMA finds its signal, but once again, the possibility was raised that by using xenon as a material to trap particles instead of Sodium iodide results may not be comparable.

As I recently recalled the particle physics magazine Symmetry, after two decades of controversy, the end to uncertainty may be near. There are already several experiments underway designed to have comparable results without doubt. One of them, ANAIS, led by the University of Zaragoza and installed in the Underground Laboratory of Canfranc (Spain), also uses sodium iodide. He began collecting data in 2017 and in the coming years will have accumulated a sufficient amount to be statistically significant.

If the results are positive, one could begin to know what makes up 25% of the entire universe, hitherto unknown

Another of them is COSINE 100, a detector that also uses sodium iodide crystals that in turn are submerged in 2000 liters of liquid to reduce background noise caused by other types of particles and make it difficult to see the weak interactions of dark matter . This project, installed in South Korea, began to take data in 2016 and in December 2018 published its first results in the magazine Nature. According to the article, it was very unlikely that the results of DAMA / LIBRA coincided with the characteristics that the Standard Model, the theory that explains the behavior of matter at the subatomic level, attributes to the dark matter occupied by the galactic halo. However, the experiment needs to accumulate data for at least two more years to have enough data to tell if those variations in the signals that DAMA detectors capture at different times of the year exist or if they can be attributed to dark matter.

Reina Maruyama, a researcher at Yale University who has received funding from the National Science Foundation to test the results of DAMA with COSINE assured Symmetry that “with five years of operation of the experiment, if the signal is there, in 2021 , we should be able to see it. ” "If it is not there, although this is more difficult to do, we will also be able to refute it," he adds.

If both ANAIS and COSINE confirm the results of DAMA, the next step would be to look again for the same fluctuation from a detector in the southern hemisphere. With this objective it is foreseen that this autumn the construction of the SABER experiment will begin in an old gold mine in Australia. Then, it would be a question of beginning to analyze the signal to know details such as mass and begin to describe the nature of those WIMPs that make up dark matter. If the result were negative, it would be necessary to continue looking for another side, although it would still remain to be resolved where this mysterious fluctuation comes from which, for 20 years, Rita Bernabei and her family say it is the first dark matter detection.

The hardest diamonds are black and fell from the sky