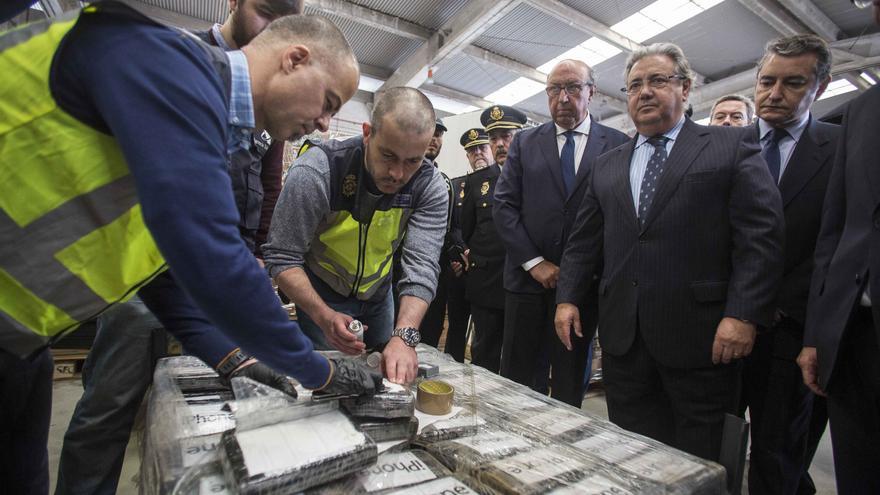 The Supreme Court has confirmed a sentence of 12 years in prison to an agent of the Civil Guard of Algeciras who participated in the introduction into Spain of the biggest stash of cocaine seized in the history of our country: 7,337 kilos of cocaine hidden in pallets and boxes. The judges of the criminal chamber have rejected the agent’s appeal against a sentence that, in addition to serving him in prison, carries fines of 1,500 million euros for the agent and his expulsion for life from the Forces and Corps of State Security.

The judges have defined as “decisive” the intervention of the civil guard sentenced in this case and that has led the Justice to speak of “corruption“and” infiltration “of drug traffickers in the Security Forces of our country. A situation that, the magistrates who have studied this case have said,” must be eradicated. “

The seizure of the cache was announced by the Minister of the Interior himself, Juan Ignacio Zoido, in April 2018, just one day before their arrival on our shores. Zoido said that “this one today is not one more, because we are talking about the largest seizure of cocaine in a container carried out so far in Europe.” He then announced the amount seized in a container from Colombia: 8.7 tons of cocaine hidden among bananas that had entered through the port of Algeciras to be distributed throughout the continent.

The operation ended with a dozen arrests in Spain and France and one of those arrested was an agent of the Civil Guard tax shelter in the port of Algeciras. He was part of the drug gang and his job was to make it easier for the truck with tons of cocaine camouflaged among bananas to leave the port in the direction of an industrial estate in Malaga without anyone checking its contents. The objective was to take the truck with the drugs to the Malaga industrial estate of El Viso, where the front, a fruit import company called ‘Tropical World’, had its headquarters.

What neither he nor his cronies knew is that the entire process was being monitored by the Anti-Drug Prosecutor’s Office and a Malaga court after receiving a notice from the United Kingdom: the ship ‘Lucie Schulte’ had left Turbo (Colombia) loaded with cocaine direction Cádiz. The result, according to the judicial documentation of the case, was the seizure of a cache of 7,337 kilos of cocaine hidden in pallets and boxes with an estimated value of more than 250 million euros in the illegal market.

Several arrests of the group of drug traffickers took place in Spain but some of the leaders of the group had time to escape. Some of them were detained in Saint-Étienne, a French town located about 60 kilometers from Lyon, and were handed over to Spain through various European Arrest Orders. Finally five people sat on the bench of the Provincial Court of Malaga and received sentences of between 5 and 12 years in prison.

The Supreme Court, as elDiario.es has learned, has confirmed the highest sentence of the only convicted person who took his case to cassation: the Civil Guard. The judges of the criminal chamber have endorsed the sentence of 12 years in prison imposed by the Hearing of Malaga and subsequently confirmed by the Superior Court of Justice of Andalusia. A conviction that also entails “the definitive deprivation of his employment” in the Civil Guard or of any other in the State Security Forces and Bodies.

The sentence also declares firm the two fines of 750 million euros imposed by the Malaga court both on the civil guard and the three leaders of the drug trafficking organization and the driver of the truck in which they took the drugs from Algeciras to Malaga. In total, 7,500 million euros in fines for the five with sentences of between 5 and 8 years in prison for the rest of the defendants. An amount that it will be difficult to pay and that will gradually translate into seizures and more time behind bars.

The Supreme Court has rejected the appeal of the civil guard of Algeciras. A letter in which the agent went so far as to say that he had not committed a crime but, rather, had committed a “mistake” by not checking what was inside the cab of the truck before letting him leave the port. A “little diligent behavior” due to “lack of attention” which, according to the convicted person, should at best have led to some kind of disciplinary sanction.

The criminal chamber examines the evidence and rejects this possibility outright by assuring that “it is truly difficult” to say that it is not a crime taking into account the “indictorial panorama”. In the first place, the rest of the condemned explained in the trial that they all knew that they had an ally within the Civil Guard to get the drug out of Algeciras. Secondly, the driver even confessed that he was hanging around the port for a while until his buddy’s shift began.

His allegation of an alleged lack of control in the customs of the port of Algeciras is “gratuitous speculation” for the judges who have examined the case. The Andalusian courts were especially forceful in condemning and ratifying the punishment of this group of drug traffickers and specifically that of the Civil Guard. The judges of both the Malaga Court and the Andalusian Supreme Court were clear when talking about the corruption within the Civil Guard that opens the door to this large-scale drug trafficking.

The judges of the Superior Court of Andalusia said in March that the agent’s actions are explained “purely and simply by the presence of corruption, otherwise, as the court ruling indicates, by an infiltration of the criminal organizations in the Security Forces and Bodies that must be extirpated “.

The Superior Court of Andalusia has already echoed the “extraordinary” amount of cocaine seized to justify the conviction of the Civil Guard. An amount, said that sentence, “which at that time was the largest cache of cocaine seized in national territory and, as far as the court knows, continues to be so today.”

As revealed exclusively elDiario.es In recent weeks, this has not been the only arrest of corrupt agents from the port of Cádiz who collaborate with drug traffickers. The ‘Toga operation’ resulted in the dismantling of one of the largest hashish and cocaine trafficking organizations in our country in June of this year. Among those arrested were two agents of the Civil Guard. One of them was in the tax section of Tarifa and was nicknamed ‘El Fuerte’ and ‘Ojos de Loco’.

The National Court, as published this newspaper A month ago, he handled a report from the Internal Affairs of the Civil Guard that warns of the existence of a serious problem in the south of the country. The report assures that “there is a serious problem of police corruption in southern Spain” and that “one of the institutions that the large organizations dedicated to drug trafficking seek to corrupt is, without a doubt, the State Security Forces and Bodies.”