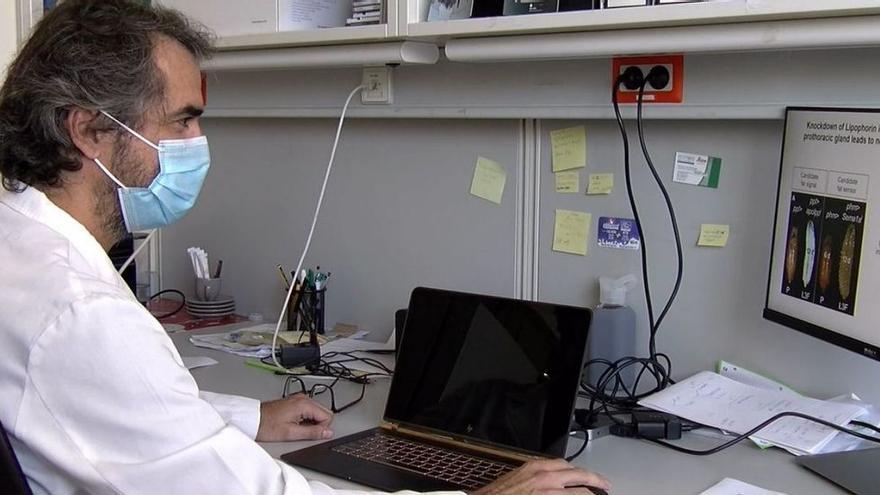 The year 2021 for the Institute of Neurosciences of the UMH and the CSIC has been closed with a positive balance. Despite the difficulties of pandemic, have been published more than ninety scientific articles, surpassing by twenty those of 2020. Here are the twelve most significant.

1- The path of reward

Two works by Eduardo Puelles identify key molecules for the functioning of the fundamental nerve fibers in behaviors related to reward and psychiatric illnesses.

The network of nerves that connect the eyes to the brain is sophisticated, and researchers led by Eloísa Herrera have shown that it evolved much earlier than previously thought, thanks to an unexpected source: the gar fish.

Isabel Pérez Otaño has characterized the complexes that facilitate the consolidation of associative and spatial memories in mice. The work reveals a potentially specific target to correct cognitive impairment in pathologies.

A study by Inmaculada Cuchillo points to the LRP3 protein as a new therapeutic target and as a clue to find new strategies in the aging research and Alzheimer's. Buildup of the protein in the brain is linked to Alzheimer's.

A component of marijuana induced an anxiolytic effect in a new mouse model of spontaneous withdrawal from cocaine, according to a study by Jorge Manzanares that has been published in 'Neurotherapeutics'.

6- A mouse model for the study of schizophrenia

The former director of Neuroscience Salvador Martínez has worked with mutant mice in which the schizophrenia, a disease that affects 1% of the population. Research has focused on the risk of developing the disease and its underlying pathophysiological processes.

7- The personal footprint in the brain

Known as social memory, a neurotransmitter allows us to recognize people we have seen before. The first author of the research is Félix Leroy, who joined the institute at the end of 2020, from Columbia University, with an ERC scholarship.

8- Repair of the sensory circuit

The Neurigenin2 gene is capable of converting star-shaped nerve cells, astrocytes, into neurons. This work has been carried out by Guillermina López Bendito and opens the door to restore sensory circuits of sight or hearing damaged in early stages.

The communication between body fat and the brain is a switch that sets off puberty. In conditions of childhood overweight, fat transmits the wrong message to the brain, according to Javier Morante and María Domínguez.

10- Neuronal death due to epilepsy

Those responsible for the atrophy or sclerosis associated with temporal lobe epilepsy are a series of genes that are expressed differently in different cell types of the hippocampus. Participating in the research, on behalf of the UMH center and the CSIC, José López Ayala.

Ramón Reig has shown that, as in humans, in mice there are two regions at the entrance gate to the affective control circuit, cognitive functions and motor activity. This helps understand certain diseases and disorders.

12- Critical period of the social circuit

The regulation of complex behaviors in the brain, such as maternal care or couple bonds, has been visualized in 3D with unprecedented resolution thanks to Pilar Madrigal and Sandra Jurado.