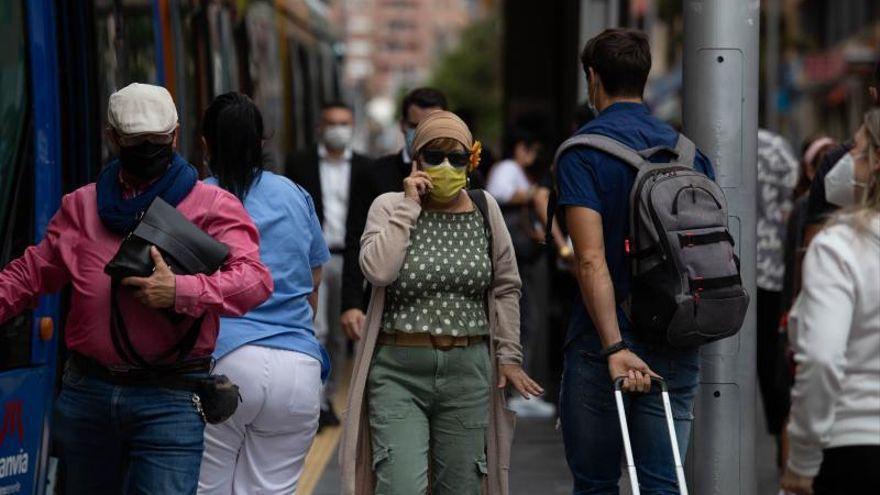 Up to a dozen municipalities on the island are at high or very high risk against the pandemic, in terms of cumulative incidence during the last 14 days per 100,000 inhabitants. According to the data sent yesterday by the Canary Islands Health Service (SCS), Adeje, El Sauzal, Arona, El Tanque, Tegueste, Candelaria, Arico, San Cristóbal de La Laguna, Granadilla de Abona, San Miguel de Abona, Santa Cruz de Tenerife and Vilaflor de Chasna are the twelve municipalities in the worst situation, always in based on the figures recorded during the last two weeks.

The accumulated incidence at 14 days in these dozen municipalities ranges between 150.93 new cases per 100,000 inhabitants in the southern municipality of Adeje and 408.16 registered in Vilaflor, also located in the south of the island.

In the rest of the cases, this incidence presents the following figures: 156.6 in the municipality of El Sauzal, in the north of Tenerife; 166.71 in Arona; 175.32 in El Tanque; 177.2 in Tegueste; 179.69 in Candelaria; 197.26 in Arico; 228.43 in San Cristóbal de La Laguna; 245.94 in Granadilla de Abona; 254.38 in San Miguel de Abona; 262.91 in Santa Cruz de Tenerife and 408.16 in Vilaflor de Chasna. In the latter, it is necessary to take into account the low demographic density registered in the nucleus located at the highest altitude in Spain. All this, according to the data made public by the agency dependent on the Ministry of Health of the Government of the Canary Islands, which Blas Trujillo manages.

It must be pointed out that the situation changes if the incidence of new accumulated cases is taken as a reference for seven days. Taking this as a value, there are entries and exits in the list of municipalities most exposed to the risk of the effects of Covid-19. The municipalities of Adeje, Arico, Arona, Granadilla de Abona, San Cristóbal de La Laguna, San Miguel de Abona, Santa Cruz de Tenerife, Tegueste and Vilaflor remain on this payroll. Arafo, Garachico and San Juan de La Rambla are added to that group. In this way, the situation during the last week has improved in three of the municipalities with the highest incidence of cases within 14 days: Candelaria, El Sauzal and El Tanque, without a single case in the last week. All these data were analyzed at the mayors’ meeting held last Thursday at the Teatro Leal, in La Laguna, hours after the Government of the Canary Islands determined level 3 on the island.

This new situation is in force from 00:00 hours this Saturday, curiously the same day that the Ministry of Health The non-obligatory use of masks in public spaces applies: there are many mayors of Tenerife who have expressed their concern about this measure and recommend that the use of this protection be maintained because the epidemiological situation is not the best at present.

Jose Manuel Bermudez, Mayor of Santa Cruz de Tenerife, told this editorial last night that the situation is “worrying”, but calls for interpreting the data “with caution” due to the high mobility that is registered in the Metropolitan Area. In the case of the island’s capital, he explained that «there are thousands of people who come to work in this municipality every day, a circumstance that must be taken into account because contagion does not always occur in the city, but in another area of Tenerife, since the incidence is very dispersed ».

Luis Yeray Gutiérrez, mayor of La Laguna, also expressed his concern at the fact “that we have lowered our arms at a time when many believed that we had overcome the pandemic.”

The upward trend in the number of infections experienced by the island of Tenerife In the course of the last two weeks it is one of the issues that the experts are analyzing, taking into account that there are factors that are almost identical to those of Gran Canaria: vaccination rate and number of trackers, among others.

Among the emergency measures that have been taken during the last hours in Tenerife is the opening of a vaccination course located in the Santiago Martín Island Pavilion, in La Laguna. The first intention is to keep the vaccination shifts for as many hours as possible, although the process to be followed in the night time slot has not yet been determined. These actions, preferably public awareness, will determine the evolution of statistics related to the control of the pandemic caused by Covid-19.

Twelve municipalities in Tenerife are at high or very high risk. Read more

“If you want a drink, today is the last day we open.” Read more

The Canary Islands are still among the communities without contagions in nursing homes. Read more

Canarias is released from the mask outdoors after 45 weeks. Read more

Of the 185 infections recorded today, 139 -three out of four- are on the island of Tenerife.

The Canary Islands registered 185 new cases of coronavirus and two deaths associated with the disease this Friday, in Tenerife. Read more

37% of the Canarian population, immunized against Covid-19. Read more

“Vaccines are super safe and with them you can already see light at the end of the tunnel.” Read more

The hoteliers are studying legal ways to avoid the closure in Tenerife and affirm that “it does not make sense.” Read more

Canarias removes the mask with a rise of 4,243 infections in a month. Read more

A Covid patient in the Canary Islands criticizes that it took days to do a PCR: “When I went they sent me home with paracetamol.” Read more

The Canary Islands have administered 1,648,158 doses of the vaccine against COVID-19. Read more