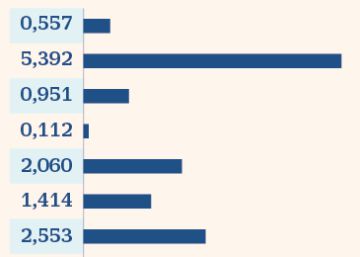 Stock markets suffer in 2020, and the Ibex 35 is just one more example of the effects of the pandemic. So far this year, it has fallen 24.87%. The Great Confinement and the damage suffered by macroeconomic indicators have been felt strongly. The speed with which governments and central banks have acted to limit the negative effects has not been enough to contain the bleeding in equities.

Investors have been forced to adjust their portfolios with a noticeable reduction in their exposure to risky assets. But while private investors and large funds were undoing their positions, the companies themselves and their managers have carried out the opposite process.

The managers of the Ibex 35 companies have invested more than 50 million euros in shares of their companies in the midst of a crisis, and several Ibex firms have taken advantage of the moment to increase their treasury stock. Since March 16, the first working day of the state of alarm in Spain, 12 listed companies of the Ibex 35 have carried out operations to buy and sell their own shares, according to CNMV records.

The result is that, in the last two and a half months, the dozen Ibex firms that have reported to the CNMV have invested some 437 million euros in net purchases (acquisitions minus sales) of own shares. Listed companies must report their treasury stock only when purchases exceed 1% of capital.

The objective of these operations, in most cases, is to give liquidity to the price. And, although it is not the mission, that greater liquidity has been able to help sustain prices. In any case, the Securities Market Law prohibits them from being used to raise prices. Of course, most stocks are red in the year. Some of the listed companies that have resorted to treasury stock are among the most affected sectors.

The company that has invested the most money in itself since March 16, the day in which the Ibex fell to a minimum since July 2012, has been Repsol. Two sessions, the one on March 19 and the one on March 23, were enough to acquire shares representing 1,928% of the capital. However, after sales made on March 20, the company’s treasury stock is reduced to 1.573% of capital.

Purchases in Repsol net terms total more than 300 million euros. Although, the price of the total percentage that it has on the balance sheet is lower, since the company bought at 13.68 and 11.56 euros per share on the dates mentioned, according to the data communicated to the supervisor. Those prices are much higher than those listed on those days, around 6 euros per title. Curiously, the sale it reported, for 9.6 million shares, was made at a negotiated price in the session: 6.5 euros per share.

Along with the oil company, companies such as Iberdrola stand out, which has allocated 94 million to the acquisition of shares. Its treasury stock has gone from 1,565% last February to 2,553% today. The electric company is on the charts this year on the Stock Exchange, which represents a victory at a time of strong instability like the current one.

Another listed company that in the middle of the storm has launched to buy shares has been Santander. Although in net terms the amount is short for its giant capitalization: 5.6 million euros. Bankia has also used this formula to provide liquidity, with close to 2 million euros. BBVA has not been left out in the purchase of securities. The entity has invested 29 million. But, after sales, the net result gives a negative balance of 11.5 million.

There are five other companies on the list. Meliá has shot its total treasury stock to 4% of capital after investing 7.8 million; CIE Automotive has allocated 18.5 million; ACS, which has recently expanded its program, 24 million, and Indra has spent around 82,000 euros. MásMóvil also operated, but it remains a draw. Acciona and Ence, for their part, registered negative balances.

Supervision. At the beginning of the year, the regulator chaired by Sebastián Albella set eyes on treasury stock operations. The CNMV released a statement that invalidates the criteria on the discretionary treasury stock operation of 2013. Its objective is none other than to monitor that the purchases of own shares do not incur market abuse if the operations do not take place in the under a share repurchase program communicated to investors or a liquidity contract.

Treasury stock functions. Companies use share buybacks in most cases to redeem – that is, eliminate – securities. Market theory indicates that this increases earnings per share. Some companies use this route to offset capital increases released from reserves, which cause a dilution of the weight of the shareholders. These are the cases of Iberdrola, Repsol or Ferrovial. When destroying the titles issued more it returns to the balance.