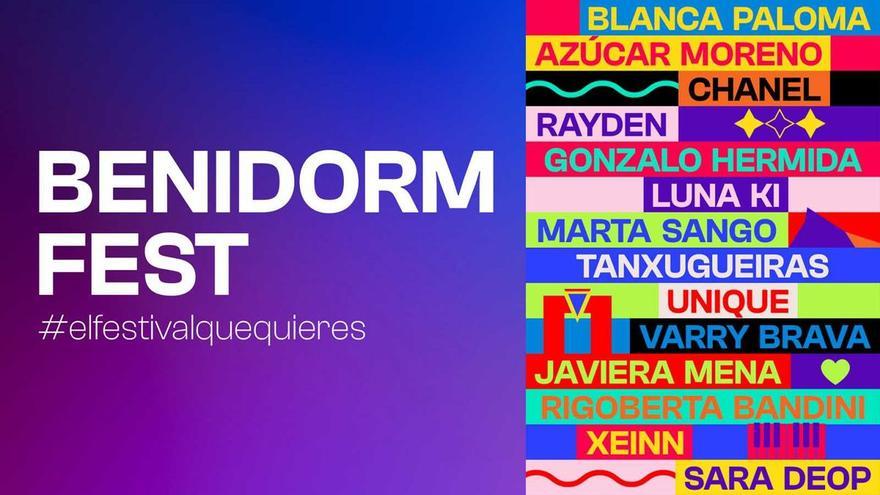 TVE has published this morning by surprise on its website the 14 themes participating in the Benidorm Fest, where will the next one come from representative of Spain in the Eurovision Song Contest 2022. The pre-selection still has no confirmed date, but it does seem certain that it will take place next January.

Azúcar Moreno could be the Spanish candidates in Eurovision more than three decades after reaching the fifth place with "Bandido". He returns with the song "Postureo", a song that keeps all the essence of the duo, with a strong presence of the Spanish guitar, percussion, Arabic instruments and fusion of sounds. It has the essence of flamenco brought to a very modern sound. It is a song to dance and enjoy the force of a catchy melody, carried to the top by two of the most unmistakable and iconic voices on the national scene and Eurovision.

Blanca Paloma presents us with an exciting and intimate ballad, with nuances that remind us of Andalusian music. "Secret of water" is the theme of the headline of the Lucía la Telaraña docuserie, from RTVE Play. This is also the first song that the young singer has recorded in a studio.

Chanel aims to sweep the Benidorm Fest and turn "SloMo" into the hit of the EuroClub in Turin. The theme is a current pop dance with Latin and urban touches composed by Leroy Sánchez, Keith Harris, Ibere ​​Fortes, Maggie Szabos and Arjen Thonen.

Gonzalo Hermida - Who would have said it

"Who would say it" is a romantic ballad composed by the singer-songwriter Gonzalo Hermida and David Santisteban. Framed in one of the most successful genres and styles in Spain, it is perfect to make all of Europe fall in love at the next edition of the festival.

Javiera Mena participates in the Benidorm Fest with "Culpa", a song composed by herself that she defines as "a purgation in Pop Dance mode with a touch French house on the feeling of guilt. "This electro pop would be one of the most original and unique candidacies with which Spain has participated in the European competition.

"I'm going to die" is an alternative rock theme inspired by the anime universe. The first version of the song was recorded inside a closet in 2019 and later in the studio. It is one of the riskiest proposals and in the words of the artistx it is "the experience of a painful and dependent love relationship, in which life has no meaning without being loved". They sign the letter lx propix Luna Ki with Allnightproducer, Vanity Vercetti and Digital Geass.

Marta Sango - You are still on my mind

Marta Sango, contestant of Operación Triunfo 2018, performs with "You are still in my mind", a retropop with an eighties airs very much in the vein of the artist's next album that will be released in spring 2022. "Sigues en mi mente" is composed by the artist herself together with Marco Frías and Mané López, it deals with "the memory of a relationship of the past ".

Rayden will perform at the Benidorm Fest "Calle de la Llorería", whose lyrics have been written by him. He has also participated in music, which he has composed together with François Legoffic.

"Ay Mama" is a feminist hymn with which Rigoberta Bandini vindicates the beauty of the female body, motherhood and all women. The song, composed by herself together with Estebana Navarro Dordal and Stefano Maccarroney, preserves her very personal style and fresh and unique sound.

Olaia Maneiro, Aida Tarrío and Sabela Maneiro form the Galician folk group Tanxugueiras. The group, feminist and vindictive, is committed to a theme that draws on Celtic music and the most ancient folklore of its region. "Terra" is composed entirely in Galician, although it includes the phrase "There are no borders" in all the co-official languages ​​of the State. It will be the first time that a song written in the official language of the State has participated in a Spanish preselection.

Mat, Arman, Gio and Valen, the guys from Unique, will fill the stage of Benidorm Fest of good energy and positivism with the Latin and urban rhythms of "Better". The song is composed by Marco Dettoni, Manu Chalud, Armando Valenzuela, Carlos Almazán, Javier López and Raúl Madroñal. The authors created the song - together with the members of the group - with the idea of ​​creating a hymn of union.

Varry Brava performs with "Raffaella" at Benidorm Fest, a tribute to the wonderful Carrà with the pure essence of the pop group indie. "We wanted to make a Eurovision song, powerful, full of energy and emotion. We began the composition by paying homage to our favorite authors and interpreters, Manuel Alejandro, Julio Iglesias, Raphael, and as the story and the song progressed the spirit of Raffaella crossed like a shooting star on the road, it illuminated the melodies, the words, and we simply let ourselves be carried away by its drive and its influence ", explain the components.

"Echo" is a pop song with Synth pop and R&B influences that speaks just about the moment when you find your soul mate. The theme is composed by Carlos Marco, Jimmy Jansson, Marcus Winther and Thomas G: son.