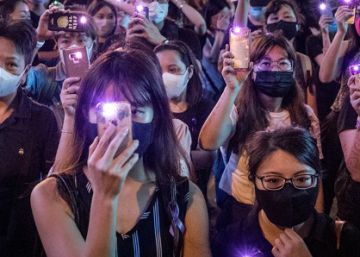 The last street protests in Hong Kong, Bolivia or Catalonia have in common that they have moved from mobile screens to streets in a few minutes. And as the way to convene them has changed, so have the counter-maneuvers to stop them. That sometimes includes government censorship through an Internet blackout, that is, a network block. In 2018 (last year for which data are available) there were 196 blackouts in 25 countries, many more than the previous two years with 75 blockages in 2016 and 106 cuts in 2017. The Indian Government tops the list of countries with more blackouts, according to the Access Now report, an organization that defends rights on the Internet.

The official justifications for Internet blackouts by governments in 2018 are public safety in 91 blackouts, political instability in 53, lack of control in protests in 45 Internet courts, national security and common violence in 40 courts and the fake news or hate speech in 33 blackouts. The most affected regions were Africa and Asia, Iceland is the most protective country for Internet freedom worldwide and China is for the fourth consecutive year the state with the most control on the Internet, according to the Access Now report.

The Government of Ethiopia also makes cuts in the network to manage security situations. During the summer of 2018 there were violent clashes between Ethiopian military and separatists in the city of Jijiga that caused the burning of an Orthodox church and the closing of shops and hotels. There was a popular appeal by social networks and the Government cut off the communication. “The excuse for these courts is usually to guarantee the safety of citizens when a conflict becomes violent and the security forces of a given country cannot control the situation,” says Alexandre López-Burrull, professor of science studies at the information and communication from the Oberta University of Catalonia (UOC).

However, the inhabitants of the area wanted to know what was happening. “When the shooting and looting took place, we wanted to get more information about what was happening, we wanted to share with the world that we are the victims and we couldn’t do it because they cut the Internet. We could not leave our house and yet we heard shots and screams. We had to call the neighbors of Addis Ababa, (about 600 kilometers away), to find out what was happening in our city, “is the testimony of a Jijga resident in the Access Now report.” When certain protests are prohibited and the total or partial closure of the networks is limited to the civil rights of citizens, ”says Professor López-Burrull.

Some believe that it is also counterproductive. Sometimes the way to guarantee security is the opposite method: the complete opening of the Internet. The more information the networks travel, the security services can do their job better, especially in tasks that concern all citizens. “In the fight against jihadism you get more relevant information without closing social networks because it is possible to get the network of contacts and messages that are exchanged,” says López-Burrull.

But not only Twitter or Facebook have achieved great convening power. Applications like WhatsApp or Telegram have also facilitated the organization of many movements since Internet platforms offer a new way of citizen participation. It’s called click activism. “It is a gradual transition path from cyber-activism to technopolitics, that is, the tactical use of digital networks for collective political organization and action,” he says. Antonio Calleja, sociologist expert in political technology from the Oberta University of Catalonia (UOC).

The Arab Spring It was the first movement that used social networks as an instrument to viralize their demands internationally. “It was a milestone of the digital society, since they brought together the control of the media by the governments of the countries involved, with the use of social media such as Facebook and Twitter where images of what really happened were hung,” he says Lopez-Burrull In Spain there was a change of scale with the SMS during the demonstrations for the attacks of 11-M, “but it was not until the movements of 15-M of 2011 when there was a massive power of convocation through the networks, one year before the Arab spring had begun in Tunisia ”, adds Arturo Gómez, a doctor of journalism from the Complutense University of Madrid (UCM).

The reactions to the conviction of the politicians of the Government of Catalonia is the current great example in Europe of mobilizations through mobile phones, although in this case the authorities did not block the Internet. Some groups like Tsunami Democràtic organized demonstrations, occupied the airport of the Prat of Barcelona and carried out cuts of roads after knowing the sentence. Protesters went to the locations indicated by the group on social networks. “The advantages of these means are the low cost and access to a large number of people that by other means would be impossible. The disadvantage is the visibility of the strategy of the conveners ”, concludes Gómez.