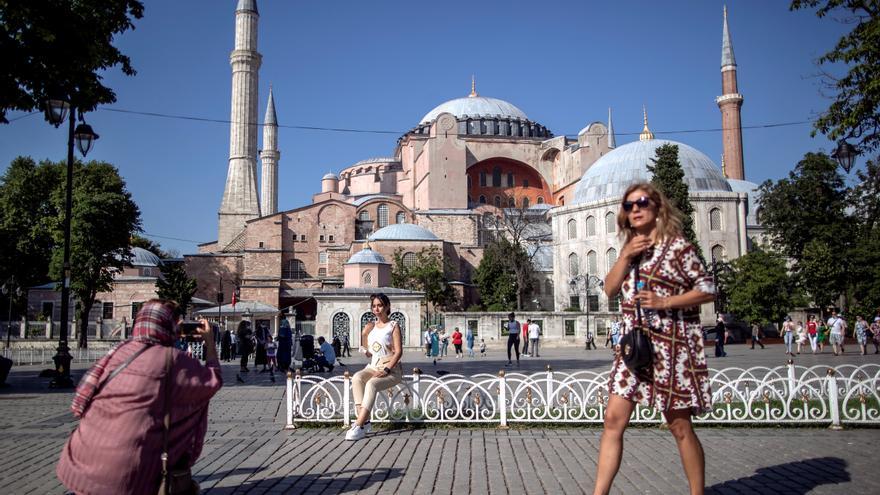 Istanbul, Jun 29 (EFE) .- Despite being still on the red list of several of its main countries of origin of travelers, Turkey expects the tourist season to reach, if not the levels prior to the pandemic, then at least much better figures than last year’s disaster, mostly thanks to visitors from Russia.

“The situation has improved a little compared to last year. People seem to be traveling more, we are at 15 percent occupancy, but this is very difficult to survive,” says Erkan Diler, manager of a hotel in Antalya, in Efe. the Mediterranean coast.

With an index of 66 daily infections per million inhabitants, more than double that in the European Union, the Governments of Germany, Bulgaria and the United Kingdom, of which 20% of the visitors they received left in 2019, maintain their warnings and recommendations not to travel to Turkey.

Russia, the country that feeds the most Turkish tourism, with about 15%, resumed flights with Turkey a few weeks ago, which it had restricted since April due to the increase in infections.

The resumption of flights from Russia has had an immediate effect on increasing bookings.

“There is a massive demand to go to the Turkish coast. Air traffic has risen by 30%,” explained recently Mehmet Issler, vice president of Türofed, a hotelier association, according to the Sabah newspaper.

For its part, Turkey only requires a negative PCR test, if it is not vaccinated or has passed the disease, for visitors to these countries, but not quarantine of any kind, despite the fact that Russia has this week registered a new record of deaths from coronavirus and the incidence of cases is five times higher than the Turkish one.

Turkey only applies fourteen-day quarantine to visitors from eight countries, but none are among the twenty who travel the most to the Eurasian country.

Turkey lifted a three-week total lockdown in early June in which only essential services were allowed and managed to reduce the number of infections from 65,000 a day in April to 6,000 today.

The Government made it clear that the restrictions did not affect foreign visitors, who could go out and enjoy a wide variety of services.

However outside of the more touristy areas, restaurants, shops and museums remained closed.

“It will be difficult to start because we receive tourists mainly from Russia. I think the season will really start in July,” explains Diler.

“We have lowered the prices and we offer new promotions, with free additional services,” he points out.

Another hotelier in Antalya tells Efe that some bars and restaurants have not yet opened for the tourist season, because the curfew at ten o’clock at night will not lift until the end of June.

That coastal province received 5.5 million tourists in 2020, a negligible number compared to 20 million the previous year.

Three million Russians are now expected to arrive between June and September on this Mediterranean coast, according to the association of tour operators ATOR.

In 2019, before the pandmeia, Turkey welcomed 45 million tourists, seven million from Russia, a number that plunged to 16 last year, according to the Turkish Statistical Institute (TUÏK).

This collapse meant the loss of 8,300 million euros and more than 320,000 people in the sector were left without work.

The Turkish Hoteliers Federation (Türofed) announced in May that they expect to receive between 25 and 30 million tourists this year, which, in the best case scenario, still represents only 66% of the prepandemic figures.

In Istanbul, tourists from Ukraine and Persian Gulf countries pass through monuments and terraces, although many establishments remain half empty.

“Tourists come by droppers, the situation is very difficult for workers in the sector. We have to constantly adapt to other tourist profiles to survive,” Aylin Sapanci, a tourist guide in the city of Bosphorus, tells EFE.

To attract tourism, the Turkish government announced in May that workers in the tourism and hospitality sector will have priority to be vaccinated against covid and thus offer greater protection to visitors.

A promotional video to attract tourists with the slogan “Enjoy, I’m vaccinated” caused controversy among the Turks, who complained of having to close shops and stay in their homes to avoid infections, while tourists led a normal life on the street.