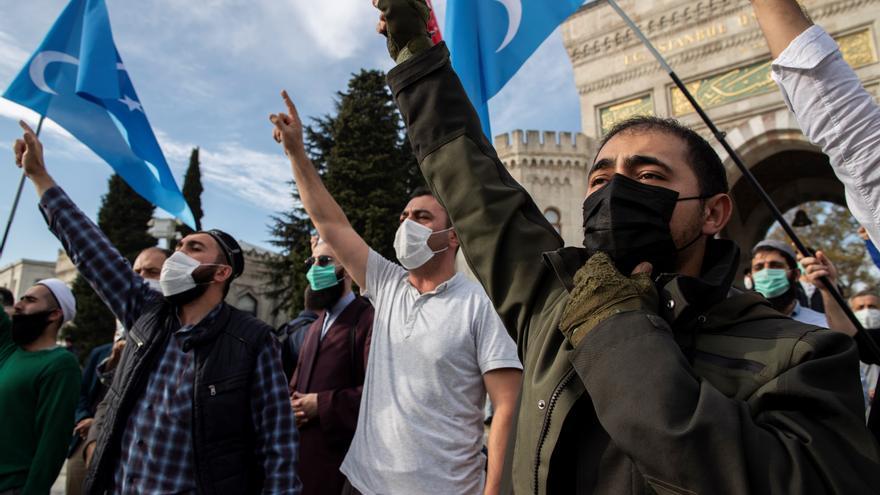 "We will not renounce cartoons," declared French President Emmanuel Macron last Wednesday during the state tribute to Samuel Paty, the professor beheaded by a young man radicalized for teaching the Muhammad cartoons during a class. In the courtyard of the Sorbonne university, Macron defended freedom and secularism and made clear his will "to end terrorists, to reduce Islamists, to live as a community of free citizens." Emmanuel Macron's speech and the tough measures announced by the government in the wake of the latest attack have outraged some Muslim-majority countries and sparked protests, calls for a boycott of French products, hateful messages against the French president on social media and a diplomatic war between France and Turkey.

Escalating tension between France and Turkey

Turkish President Recep Tayyip Erdogan attacked his French counterpart over the weekend: "What problem does Macron have with Islam, what problem does he have with Muslims? Macron is in need of mental care therapy." As a direct consequence of these statements, which the Elysee quickly described as "unacceptable" and "very offensive", Paris withdrew its ambassador from Ankara on Sunday.

This Monday, the Turkish president went further and called for a boycott of French products: "Just as in France some say 'don't buy Turkish brands' I speak from here to my nation: ignore French brands, don't buy them ", he declared in an official speech in Ankara. Erdogan has also compared the current situation to fascism and Nazism: "a lynching campaign is being carried out against Muslims similar to that carried out against European Jews before World War II." Erdogan finished his speech by asking the European Union to put a stop to the "hate campaign led by Macron", referring to the measures that are being taken in France to fight against radicalization and that, since the murder of Samuel Paty, the French executive has stepped up.

The Turkish president is not the only one who has criticized Emmanuel Macron. Other countries like Jordan, Pakistan and Morocco, among others, have spoken out against the Charlie Hebdo cartoons and Macron's recent speech defending freedom of expression and the right to blaspheme.

Pakistani Prime Minister Imran Khan has accused the French President of being provocative: "Unfortunately, President Macron has chosen to deliberately provoke Muslims, including his own citizens, by encouraging the display of blasphemous cartoons against Islam and our Prophet." . In Morocco, the Foreign Minister have "strongly" condemned the continued publication of the cartoons. Jordanian Islamic Affairs Minister, Mohammed al-Khalayleh, has pointed out that "insulting" the prophets is not "a matter of freedom of persons, but a crime that incites violence."

Faced with the wave of criticism, Macron decided to speak on Twitter - in French, English and Arabic - to make his position clear: "We will not give up, never. We respect all differences in a spirit of peace. We do not accept hate speech and we defend a reasonable debate. We will always be on the side of human dignity and universal values. "

Among the responses to the French president highlights that of the Qatari businessman Fehad Buzwair, president of Buzwair Group, who asks him to officially apologize and accuse him of being "one of the main reasons for lighting a fuse that could lead his country down a dangerous path." In a similar vein, the owner of Málaga CF since 2010, Qatari Sheikh Abdullah ben Nasser Al-Thani, also joins in the reproaches: "If there is no official apology for all Muslim countries in relation to racist speech and incitement to hate, take the consequences. "

But the outrage that Emmanuel Macron has caused among Muslim countries goes beyond social networks and is also reflected in the streets and in shops. In recent days there have been protests in Libya, Syria, Gaza and Tel Aviv, where it is common to see protesters setting fire to photos of Macron. On the other hand, supermarkets and stores in Kuwait, Jordan and Qatar have chosen to withdraw French items, mostly cosmetic and agricultural products, such as cheese.

Aware of the consequences that a crisis like this may entail for France, this Sunday the Ministry of Foreign Affairs asked the Arab countries, through an official statement, to stop this boycott, claiming that "it does not make sense" and that it must stop immediate, "as well as all the attacks directed against France, instrumentalized by a radical minority".

France and its strategy against radical Islamism

In the midst of this avalanche of protests and diplomatic crisis in the Middle East, the president of the French Council of Muslim Worship (CFCM), Mohammed Moussaoui, has discredited the boycott on Monday, calling it counterproductive, and has qualified that "France is a large country , Muslim citizens are not persecuted, they freely build their mosques and freely practice their worship. "

For his part, the imam of the Bordeaux mosque, Tareq Oubrou, spoke publicly the day after Samuel Paty's murder. Shocked, he referred to the attacker - a radicalized 18-year-old Chechen young man who had communicated several times with a contact in Syria - as someone "completely unstructured" and added that "no spirituality gives legitimacy to the crime. , of an act of barbarism ". Tareq Oubrou explained that, in his sermons, he talks about freedom of expression, to caricature and to blaspheme.

Still, the tension is palpable in a country with a population of 5 to 6 million Muslims and where Islam is the second religion. At the end of September, Emmanuel Macron announced new measures to eradicate "Islamic separatism" and presented a bill to promote secularism and consolidate "republican principles". This law proposes, among other measures, greater control of associations, the end of an exchange program for foreign imams or the creation of a scientific institute for the study of Islam, among others. The proposal generated rejection among some Muslim groups, such as the Collective Against Islamophobia in France (CCIF), which accused Macron of "imposing repressive devices" instead of "proposing social development."

The beheading of Samuel Paty last Friday, October 16, it shocked the country and provoked a quick and forceful response from the French government, which has reinforced its strategy to eradicate radical Islamism. In just one week, France has ordered the temporary closure of the Pantin mosque, on the outskirts of Paris, for having shared a video on its Facebook page in which a father denounced Samuel Paty for having shown the Muhammad cartoons in class. Both this individual, and the video he posted on the networks, are key pieces in the investigation being carried out by the Antiterrorist Prosecutor's Office.

The Interior Ministry is investigating 51 Islamist associations for allegedly promoting violence and there are more than 80 hate investigations against those who have justified, in one way or another, the death of the professor on social media. Apart from intensifying the control of hate messages on the networks, the French Government has also announced its intention to make a crime and penalize anyone who endangers people on the Internet. The executive is also studying a security protocol in schools for when students return to school on November 2, after the All Saints school holidays, which last two weeks in France.