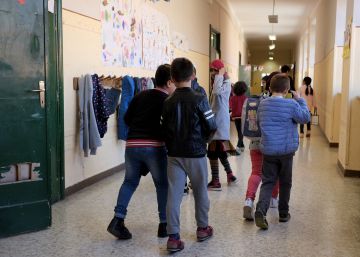 Children in Turin cannot bring food from home and consume it in the school canteen at mealtimes. They should be fed only with the menus offered by the school service or leave the center for lunch and return to class in the afternoon. The Supreme Court considers that taking lunch from home to the school canteen and having lunch there with the rest of the students, an increasingly widespread trend, is not a right. More than five years of struggle between a group of families and the City Council (responsible for the dining rooms of the schools) of Turin, the city that has led the so-called “sandwich revolt” to achieve normalize the taper in the school canteens

The ruling, which was made public on July 30, sets jurisprudence for the whole country and leaves the “organizational autonomy” in the hands of educational institutions and local authorities to manage everything related to student meals. However, the judges consider that carrying “the house sandwich” may lead to a “possible violation of the principles of equality and non-discrimination, based on economic conditions, as well as the right to health, taking into account the hygienic and sanitary risks of an individual and uncontrolled lunch ”.

On the other hand, the families that started the battle in 2013 so that their children could take a snack to school believe that the decision of the court is "a step back," as his lawyer, Giorgio Vecchione, explains to this newspaper. They complain about the quality of food offered by the school canteen and the high price of the service, which varies from 1.27 euros to 5.3 euros and in some cases reaches 7.2 euros per meal.

In 2014, they asked the City Council and the Ministry of Education to allow those who brought home food to eat it on the premises. They filed a lawsuit, which was dismissed in the first grade, and in 2016, Turin Court of Appeal He proved them right and ruled that parents had the right to choose between lunch in the school canteen and food prepared at home. "The problem now is that the Supreme Court ruling conflicts with the resolutions of other courts that have recognized the right to individual liberty," explains Vecchione, who is considering addressing the Strasbourg Court.

At the time, the decision of the Turin court had great repercussion in the rest of the country and encouraged other national schools to approve the already famous “panino da casa”(House sandwich). Other parents and even some directors of schools in Milan, Benevento, Ferrara, Genoa or Venice have managed to normalize that schoolchildren accessed the dining room with the lunch box.

The stir was such that the Ministry of Education and the City of Turin then filed an appeal to the ruling, claiming that if the children take the food from outside, it would not be possible to know who takes care of the products they are consuming at school . While the food that is within the official dining room menu, the contractor is always responsible. They also pointed out that the consumption of home meals would be a free benefit for the beneficiaries “but burdensome for the community”, in particular for the Administration, which should pay the costs of logistics, cleaning, etc., and also for the families that They pay for the dining room.

In Italian primary and secondary education, you can choose between several types of schooling that distinguish each other based on the weekly teaching hours. One of these modalities, the so-called "full time" consists of 40 hours per week, which include 10 hours of dining. The Ministry of Education considers that whoever has chosen this typology must comply with it in full, with school canteen included, because otherwise “the training project would be jeopardized, which also includes food education,” as indicated in its appeal. And invites parents who are opposed to the dining room to choose a modality that does not include this service. “Children whose parents cannot afford to pay for the service will be excluded because they will be forced to leave school during meal time, even if it is considered school hours. It is the height of discrimination ”, says the lawyer of the families.

They believe that the forced use of the dining room payment services violates the principle of free education. They allege that if school lunch is an important time to socialize and compute in the total number of school hours, then the right of students to bring food from home should be recognized, without being obliged to use the dining room service.

The Supreme Court has laid down his thesis and has given the reason to the Ministry of Education and the City of Turin appealing to the spirit of community: “The school institution is not a place where the individual rights of students or services are freely exercised. they connote in terms of mere negotiation, but it is a place where the development of the personality of the students and the assessment of individual differences must be carried out within the limits of compatibility with the interests of the rest of the students and of the community".