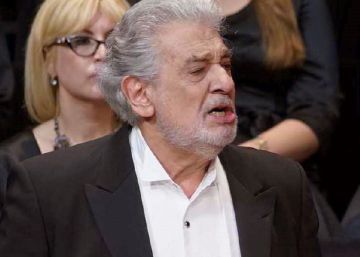 At the end of the first part, Carmen Giannatassio Y Michael Fabiano They left the stage with the gesture that it was not worth waving to such timid applauses. But it is that the favor of the public and their enthusiasm is gained with another attitude and the version that Sunday premiered of Giovanna d'Arco at Rea TheaterHe was one of the worst nights they remember. Neither Placido Domingo He was able to relieve boredom in a session for oblivion. A true truño.

When Giuseppe Verdi composed this almost chamber opera in his repertoire, he did it in a situation of monoclonal rhythm and with health problems. He barely paid attention: it took only four months and his concentration was low. The insipid libretto of Temistocle Solera, based on a drama by Friedrich von Schiller, also did not help the muses to allow the master to give birth to one of his masterpieces. That is why he recovers timidly in theaters. Nothing more than a little transition game without fuss.

It is true that the work canonically canonized the French heroine before the Church did it in 1920. Except that, little chicha. But it does contain flashes and brilliant passages that did not just appear in the voices of the singers, with the exception of almost a choir in a state of grace and in some passage of the orchestra: as in the aria of Carlo's third act, accompanied by a cello and English horn, James Conlon he marked with delicacy.

It did not happen of mere rehearsal the premiere. There was no spark nor was there any moment when the excitement was released "

The first problem was the conception of the show. If the theater is inclined towards a concert version, it is better to have the interpreters sitting on the stage from the beginning. If not, in a want and I can not of half-intentional attempt, like this one, you run the risk of making them go through a ridiculous supine. Especially when forced to leave with a face of dismissal. Dresses of frac them and with a pass of three models the soprano before launching themselves to read the score as if they were in a mere rehearsal.

The premiere did not happen that Sunday. There was no spark, nor was there any moment when the excitement leapt. Fabiano was unable to take his eye off the lectern, Giannastasio shouted without looking at the concept of singing. And Placido? He arrived in his city to comply with the file. Something not recommended when facing the end of his career. Do not go on stage to leave a memorable trail, as part of a mere formality, it deserves reflection on your part.

In this last stage he has returned to his natural baritone string. As such it has left admirable traces in the Real, as its Simon Bocanegra. The tone that now shows his voice is confusing. Go near the baritone but without the strings have forgotten their tenor glories. It's Placido after all. Recognizable and worthy. His legend height usually saves him. Less on this occasion. Far away, for example, the interpretation he made of this title in 2013 in Salzburg with Anna Netrebko. He sang with a breath and a face of terror before that racing car with championship skills. But the Spaniard's bullied shame, even his fears of not reaching it, magnified him by showing him powerfully fragile.

It has not been like that in Madrid, where I hope it goes back in the two dates that lie ahead. He has presented himself to make a bolus and sing like on the sofa in his house. Hopefully next year he will retaliate with the Giorgio Guermont that he will perform in The Traviata. What now, better forget it. Although to those who left halfway the final of Wimbledon between Federer and Djokovic to see this fiasco, it will cost them.