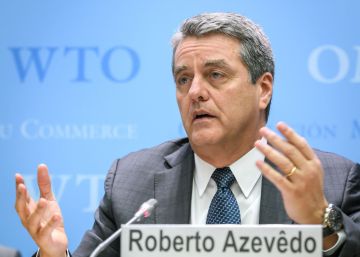 The veto that began two years ago has already achieved its goal. The World Trade Organization (WTO) as of today is inoperative, after the US has prevented the renewal of two judges of the dispute resolution court. President Donald Trump thus culminates the controlled blasting of the body that since 1995 regulates international trade. Roberto Azevêdo, general director of the WTO, struggled yesterday to present this crisis as an opportunity to illuminate a system adapted to the new times. But the US blockade threatens to leave the entity out of play indefinitely.

The Appellate Body is the most powerful in the WTO, located in Geneva, since from there the commercial disputes that confront its 164 partners are resolved. By ceasing to be operational, countries involved in new confrontations will lack an independent body to settle their differences, being at the mercy of the law of the strongest. Following its ban on the Paris Agreement against climate change, the questioning of NATO's principle of mutual defense or the abandonment of the trade agreement with the Pacific, this is another step of the Trump Administration against the multilateral order woven into over decades

“The rules-based resolution system has not come to an end. WTO members want to maintain a dispute resolution system. We must find a lasting solution, ”said Azevêdo at a press conference from Geneva. But his effort to present the half-full glass failed to push away the idea that the WTO may be mortally wounded. "It is a serious crisis," admitted the spokesman of the agency that was born a quarter of a century ago as heir to the General Agreement on Tariffs and Trade (GATT) and that precisely added as a novelty regarding its predecessor the existence of this Appellate Body.

Now, Azevêdo insists that a round of consultations will begin to study how the body can overcome this "stagnation." Trump's blockade to renew the charges had left the agency with only three of the seven judges that comprise it. Yesterday, the mandate of two of them, the Indian Ujal Singh Bhatia and the American Thomas Graham, expired, leaving the Chinese Hong Zhao alone. And so the court loses the minimum required to continue functioning, which is three members. The discontent with the WTO is prior to the current president.

The Americans protest to consider unfair some of the resolutions that have failed against them. The Obama Administration had already blocked some appointment. But only the New York tycoon has taken the step of sabotaging the functioning of the organism.

Steven Vaughn, a former Trump business advisor, said in statements to Reuters that from now on many disputes will be resolved with bilateral negotiations.

But that is precisely what the WTO intended to avoid: the absence of a common framework in 164 countries in the resolution of commercial shocks. The EU ambassador to the WTO said Monday that the current paralysis threatened to create a system based on force, not rules. "Without a doubt, this is the biggest blow to the multilateral trading system since its establishment," Chinese Ambassador Zhang Xiangchen had said the day before, according to Reuters. The difficulties in reforming the WTO and updating this body at the time of the digital economy are evident: it is necessary to reach its 164 member countries in agreement.

Given this panorama, the European Union has tried to boost a kind of parallel WTO in which the United States does not participate and in which trade differences are settled. This initiative has found support from countries such as Canada and Norway. But for now it is not clear that he will succeed.

The European Commission, for its part, prepares unilateral measures in the face of the US blockade. Brussels announced that it will soon reveal the response it will give to ensure that it can continue to defend its commercial rights in the WTO. It was announced by the Commerce Commissioner, Phil Hogan, in a statement in which he regretted the "hard blow" for the global trade order.

In response to journalists from Geneva, the agency's general director criticized the adoption of unilateral measures. "Hopefully this process can be stopped," said Azevêdo, who claimed "negotiated solutions before presenting any restrictive trade measures." These unilateral measures, he added, would be detrimental to the global economy.

"Obviously, the paralysis of the Appellate Body does not mean the end of the dispute resolution system in the WTO," Azevêdo continued.

The immediate consequence of this crisis is that the fourteen disputes brought before the WTO and that are in an appeal will remain in limbo. Some of them await a resolution for more than a year despite the fact that, in theory, their judges have 90 days to resolve them. The reduction of magistrates in the institution has contributed to the arrears.