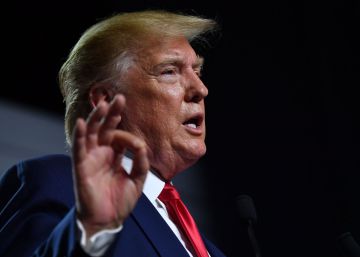 At the summit of the G7 we have seen a Donald Trump less controversial than usual, has even accepted Emmanuel Macrón's proposal to meet with the Iranian president. What happens to the president? The economic environment can help us answer the question. Trump is a millionaire since he was born and entered politics without any defined ideology, just to satisfy his personal vanity.

In 2016, the unemployment rate was 4.7%, and three years later, with Trump in the White House, has dropped to 3.7%. In 2016, the economy had been expanding for seven years. This summer has exceeded 10 years growing, the longest expansive cycle in history in the US. In Spain we have suffered the effects of artificially prolonging an expansive cycle. After puncturing the bubble in 2007 we suffered the worst economic depression since the Civil War. Economies always purify excesses, and the greater they are, the more intense the recessions.

In the 2016 campaign, Trump called the growth of the United States mediocre and promised to rise to 5%. In 2019 the economy grows to 2.5%. There is discontent in the workers vote with globalization and promised protection and America first. For this he decided to raise taxes. The tariffs mean an increase in production costs and part of the companies end up moving them at prices paid by consumers. The average real wage, discounting inflation, of industrial workers has risen a ridiculous 2% in the three years Trump has been in the White House. Trump's trade war In 2017 it was like spitting with the wind against. Since the end of 2017 US industrial exports they are stagnant and since the end of last year industrial production has begun to fall.

With world trade in recession and after busting the multilateral system created at Bretton Woods in 1945, Trump is obsessed with priming the domestic demand bomb. To compensate for your rise in tariff taxes, approved a tax cut, but above all to companies. The measure has not worked and business investment falls since the summer of 2018.

The ghost of the recession returns to fly over the United States and is very likely to be caught in the middle of the election campaign next year. Trump is aware that with a Democratic majority in Congress, it is difficult to pass tax incentives. That is why he has focused his pressures on the Federal Reserve. It requires you to lower rates and depreciate the dollar and accuses its president of being the main enemy of the United States.

If he succeeds, Trump will learn that monetary policy helps soften the effects of the recession on unemployment, but cannot avoid them. As Michal Kalecki and John Keynes taught us, entrepreneurs must once again have expectations of positive benefits to re-invest and create jobs. And for that it is necessary to purify the excesses generated in the expansive cycle, which have increased significantly due to the disastrous economic policy of Donald Trump.